Lambs of God takes on all comers with a staggering 18 nominations in every category except comedy and kids.
David Tiley 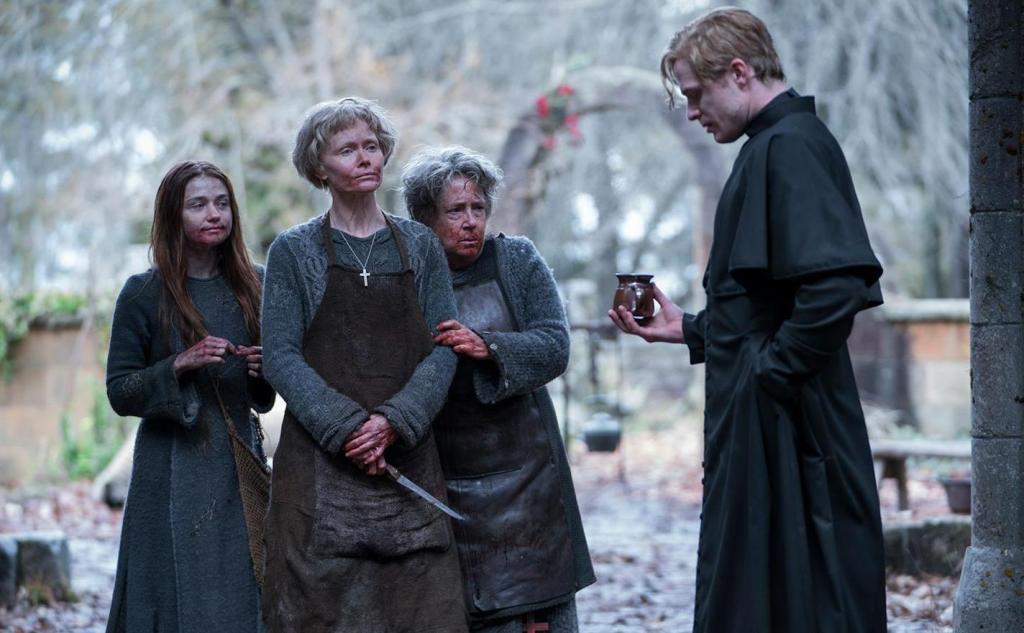 Lambs of God takes on the world. Image SFF.

You would have to say that Lambs of God is a very strange series. Would you pick this for a popular success in Australia?

Three Catholic nuns, Sisters Iphigenia, Margarita and Carla, are the last remaining members of the enclosed order of St Agnes living on a remote island with a flock of sheep which they believe are the reincarnations of their departed sisters. A young priest, Father Ignatius, arrives to survey the supposedly abandoned abbey for the church, but he is injured and becomes their prisoner.

The synopsis never locates the nunnery, but it predates Australia and is very Irish. The Catholic Church in Australia remains powerful but not like that.

The series comes from an interesting novel by Australian Marele Day, who also wrote the Claudia Valentine series. It was written by Sarah Lambert, directed by Jeffrey Walker, and produced by Jason Stephens, Elisa Argenzio and Sarah Lambert. It comes from Lingo Pictures and Endemol Shine Australia and is distributed by powerful international outfit Sky Vision.

It was made for Foxtel. It has been nominated for Best Telefeature or Miniseries. It gathered a total of seventeen nominations, which is just about everything except best sports broadcast. The shoot was allegedly so fast it probably looked like a basketball match with two balls.

Facing the sheep-crazed nuns is The Cry, produced by Claire Mundell, Brian Kaczynski, and Stuart Menzies through Synchronicity Films in association with December Media for the ABC. It was written by Jacqueline Perske and directed by Glendyn Ivin. The original network was BBC1.

Read: Review The Hunting is hot and urgent

Fighting Season was produced by Kylie du Fresne, Blake Ayshford and Elisa Argenzio through Goalpost Pictures, again for Foxtel. It was written by Blake Ayshford and directed by Kate Woods and Ben Lucas. Sky has this one internationally as well.

The Hunting comes from Closer Productions, produced by Sophie Hyde, Lisa Scott, and Rebecca Summerton for SBS. It was created by Hyde and Matthew Cormack, written by him and Niki Aiken and directed by Hyde and Ana Kokkinos.

On The Ropes is another Lingo Pictures production in which Helen Bowden is identified as producer rather than EP, along with Courtney Wise and Jason Stephens. It was written by Tamara Asmar, Adam Todd and Ian Meadows, and directed by Shannon Murphy.

Some of these are really longer miniseries.

Bloom is produced by David Maher, David Taylor, Glen Dolman, and Sue Seeary for Playmaker contracted to Stan. It was created by Glen Dolman and directed by John Curran and Mat King. Sony Pictures TV has it internationally.

Blue-Tongue Films, Jungle Entertainment and Pariah Films got together in the person of producer Michelle Bennett wrangling writer Scott Ryan and director Nash Edgerton, all to make Mr Inbetween. It released first on FX in the US followed by Foxtel here; it is a genuine series because it has been renewed for a second set.

The Secret City: Under the Eagle has kept Matchbox busy, and also led to a second series. From a series of novels by Chris Uhlmann and Steve Lewis, it was written by Matt Cameron, Belinda Chayko, Greg Waters, Elise McCredie and Angela Betzien in a full-on writers’ room.

Total Control is running now on the ABC, was produced by Darren Dale, Miranda Dear and Rachel Griffiths through Blackfella Films. Angela Betzien and Pip Karmel wrote it, and it was directed by Rachel Perkins.

Wentworth is not a series but a state of its own out of time and beyond mortality. Jo Porte and Pino Amenta produce and Fremantle Australia delivers it to Foxtel.

It seems as if nobody outside the ABC contact list has a narrative sense of humour. Or maybe they catch the competition and tickle them to death in the Ultimo basement.

Fiona Donovan is in with a chance for production design and Nina Evans for costume design. Mark Cornish and Ralph Ortner are celebrated for sound.

Again, Bryony Marks is picked out for the score.

Alison Bell is campaigning for best performance in a TV comedy.

The commercial broadcasters are busily trying to tell the government that kids’ shows are rotting the financial fabric of free enterprise, but Seven accidentally broke ranks and commissioned Drop Dead Weird, produced by Sally Browning, Monica O’Brien and Kylie Mascord. Companies are Ambience Entertainment and Air Pig Productions and it was also commissioned through Telegael in Ireland.

Bluey has come home from winning Best Working Dog at the Gympie Muster to wag its tail at audiences in this category. But not for anything else. Something is wrong with the awards system – maybe we need a category for outrageously cute.

Hardball comes from Northern Pictures through Catherine Nebauer, Joe Weatherstone, Bernadette O’Mahony, Jan Stradling, with the involvement of the ACTF, servicing the needs of ABCME.

The Inbestigators is Gristmill which means Robyn Butler and Wayne Hope, again for ABCME

Aquarius Films in association with Buster Productions put Angie Fielder, Polly Staniford, and Justine Flynn to producing The Unlisted for ABCME. Of course.

Mat Evans is nominated as editor. Diego Baldenweg, Nora Baldenweg, Lionel Vincent Baldenweg are in the running for the score.

Glitch comes in through Patrick Brammell for lead actor; Les Norton gives a chance to Kate Box as supporting actress; The Letdown – Episode 2: The Dilemma ditto for Sarah Scheller and Alison Bell as directors.

Read: Review Glitch Season 3 really will be the end

Gilbert Farkas is nominated for cinematography on SBS food show Destination Flavour China – Episode 1: Beijing. Bet he fell down in shock and rose up in delight.

Miranda Tapsell has a performance in a television comedy nomination for her remarkable work on Get Krackin.

The other TV categories are here.