A Vision Splendid of a delighted Australian audience

Hostile to Australian films? The good folk of Winton want a word with you.
David Tiley
[This is archived content and may not display in the originally intended format.] 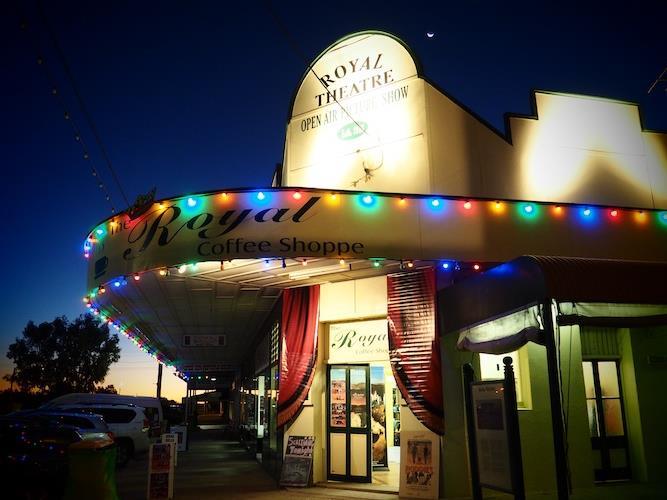 Image: front of the Winton open air cinema. All images by John Elliott, who works for the Shire.

Everything good about the Australian film industry can be summed up by eight days in the remote central Queensland town of Winton.

It is the kind of town where the mayor Gavin Baskett says, ‘We’ve had a drought running for the last seven years and then it rained in February and we lost 70,000 stock in the Shire.’

The town is 15 hours and 1500 kilometres from Brisbane by road through Roma, Augathella and Longreach. There are around 900 people, while fossils are the most stable tourist attraction. The river bed is often dry. It is served by an open-air cinema, a football ground, the Waltzing Matilda Centre, the shire council and a dustbin disguised as a giant dinosaur foot.

Each year around July, directed by Sydney-based film academic and festival expert Greg Dolgopolov, Winton runs the Vision Splendid Film Festival which screens only Australian films over eight days and nights. Since you can’t run a film in an open air cinema in daylight, the local people have co-opted the community hall as well, and both venues fill up during screenings. It claims to be inspired by the Sundance Film Festival. Swap snow for sand and Bob’s your uncle.

The mayor, Gavin Baskett, used to drive stock trucks through the town until he met a local girl in 1983. As he said, ‘The rest is history.’ He played rugby league then became a coach, and for the last 12 years he has umpired district matches.

‘We get up to a thousand people in town for the week [of the festival],’ he said happily. ‘There’s the tourists heading through and guests flying up from Brisbane, Sydney, Melbourne and overseas. We have a great volunteer base, some coming out for 10 days and bringing their families as well. It is just a good, friendly town.’

Over its six years, attendance has grown by 25% each year. The local passion for Australian films would shame a big city audience.

‘It’s all Australian films as well,’ Baskett said. ‘It shook me. I haven’t heard of most of them. Top End Wedding which I’ve never heard of. It is a bloody good show. Ladies in Black, that was great. Ned Kelly, the first feature. One Percent, that was a bikie movie. I didn’t see a bad movie. Occasionally I see one which is not my cup of tea but these were bloody good.’

Each day there is a breakfast with the stars while discussion lunches are organised as well. On Wednesday there is a dinner with an iconic silent film. There is a kids’ club every day in the cinema, and a Walk of Fame growing outside the picture house.

Best of all, Griffith University brings 50 film students out with instructions to make 20 short films during their stay, with the best run on the last night. Ashley Burgess, who organises the program, first came to the town as a location scout. ‘We came for the landscape,’ he said, ‘and then got talking to the people. They were so welcoming and hospitable.’

Griffith University also has a program which enables students to work in India and Vanuatu, but this one is pretty special. ‘Our students come from all over the world. They work very hard and very long hours. They work harder than they ever had before and harder than they thought they could, under enormous time pressure, knowing they will screen for a live, paying audience on a big screen and for the first time they know what it means to be a filmmaker. It is a transforming experience,’ Burgess said.

‘They work with people they don’t know, form teams and work out how to support each other, and learn that everyone else is there to help them. Most of the actors come from the town, and people help by offering their cars and houses and pitching in. The students feel like they are part of something bigger than themselves.’

The Winton Shire Council is a major sponsor of the festival and Baskett reckons they are very good at getting extra money. including the Queensland government’s Year of Outback Tourism Events Program. Any leftover cash is spent on the gradual refurbishment of the old cinema.

There is more to this than fandom plus a long party. Winton was a key part in the Great Shearers’ Strike which helped to create the ALP; the town is the birthplace of ‘Waltzing Matilda’ and the dinosaur fossils are vital to paleontologists. The sense of presence is strengthened by the visits of film crews to make The Proposition, Mystery Road and the current Black Bitch. A total of four TV series and three movies were shot in and around Winton in the last five years, according to the mayor.

The town has been moving towards converting a mechanics’ workshop into a studio for some years, using advice from the festival visitors. ‘Not too big’, said Baskett, ‘and not too small. Ten metres high, fibre optic cable, a retractable green screen, cubicles.’

The Griffiths group has grown from 20 students to 55, now including the Conservatorium, some actors and an animation team as well. They bring writers who work on their projects with the hope that they can bring a production back to shoot the finished screenplay, which is part of Mayor Baskett’s plan as well.

The dream of a studio has overcome other country towns with messy results. Broken Hill tried to attract Fury Road and was left with a shed full of prop cars when the production went to Namibia. But this idea seems to be more practical, as the town plans to use the space for general offices, artists’ studios with workshops and training, and an emergency centre for the floods.

‘Movies have been coming to us, but we want to start chasing them in the future,’ said Baskett. ‘It takes a lot to keep the taps working and the rubbish picked up but we hope we can make this work.’