10 great works of art we have lost forever

Fires, earthquakes, and plane crashes kill art too. Here are 10 great works of art we'll never lay our eyes on again.
Leo Ribeiro
[This is archived content and may not display in the originally intended format.] 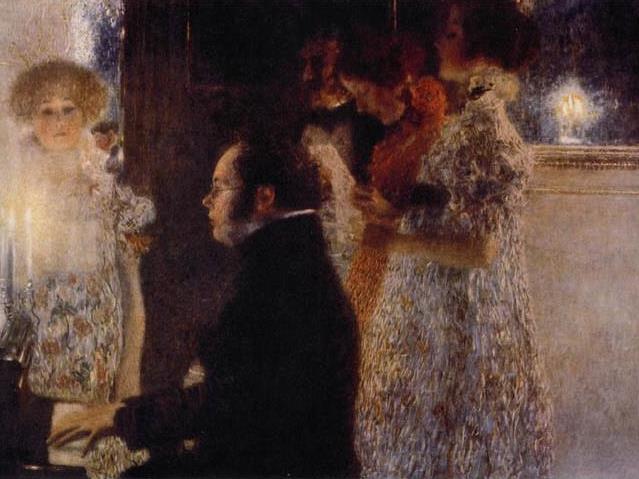 Image: A reproduction of Schubert at the Piano (1899) which is one of many Gustav Klimt’s lost works. Only the original sketch remains.

Nietzsche once famously said that ‘we have our Arts so we don’t die of Truth,’ but the transcendental beauty and power of some great works do not always survive war, fire and plane crashes. Does dead art go to heaven? We hope so – assuming the pearly gates will be wide open to us – or we might never see these masterpieces again.

Worth $1.5m, one of Picasso’s Le Peintre paintings from 1963 was aboard Swissair flight 111, which crashed off Peggy Cove’s in Canada’s Nova Scotia in 1998 killing 225 people. Conspiracy theories still run abound as 50kg of paper currency from a US bank, diamonds, rubies, emeralds and other gems worth  half a billion dollars were also in the cargo hold and never found, even though 98 per cent of the airplane and 16 tons of cargo were recovered. Only about 20 centimetres of Picasso’s work was found. The painting was met with mixed reviews and had even been described by Artnet Magazine as ‘a decidedly mediocre late Picasso.’ It seems we have lost our entitlement to our own opinions on this one.

Leda and the Swan (circa 1530) by Michelangelo

In this Michelangelo’s long lost masterpiece, Zeus takes the form of a swan to seduce Leda in one of the most explicit interpretations of Greek mythology ever created.  Some historians claim it was produced for the Duke of Ferrara but never delivered and actually sent to France. No one can say for certain what happened to the work once Michelangelo’s assistant Antonio Mini reached France with the painting and cartoon, most believe Leda and the Swan was actually acquired by King Francis I for the Palace of Fontainebleau. It is believed the drawing was destroyed due to its heavy eroticism and ordered to be burnt by Queen Anne of Austria due to its ‘lasciviousness’. Curiously, Leonardo da Vinci’s renditions of Leda have also been destroyed for their explicitness. Copies of the original works by both masters are numerous and varied but nothing beats an original.

In 1944, Salvador Dalí was commissioned by Broadway impresario Billy Rose to create a series of paintings to decorate the lobby of the Ziegfield Theatre for the duration of a new experimental musical, also titled Seven Lively Arts. Each of Dalí’s paintings depicted an art form: Art of the Theater, Art of the Boogie-Woogie, Art of the Opera, Art of the Ballet, Art of Cinema, Art of the Concert and Art of Radio – all were destroyed in a fire at Rose’s country home in Mt. Kisko in 1956. Rose commissioned Dalí to recreate the works later, but Dalí made changes to the originals, most notably The Art of Boogie-Woogie became The Art of Rock and Roll. Thankfully, the originals had been photographed by Life Magazine along with an unpleasant review. Here’s an excerpt: ‘ [Dalí] who painted them, is not only unbalanced to begin with but makes a business of seeming crazier than he is.’

The attacks of 9/11 tragically took its toll in human lives but also claimed great art treasures including works by Rodin, James Rosati, Masayuki Nagare, Alexander Calder, Fritz Koenig and Roy Lichtenstein. Buried with the twin towers was also a tapestry especially designed for the newly constructed Twin Towers, a collaboration between Joan Miró and Catalan artist Josep Royo. It was the most expensive work lost on the attacks. Royo worked with a team of five women for 10 months for 5 hours a day to get it finished. It weighed 4000 kilos.

Like the vast majority of films made in Hollywood’s silent era, Cleopatra, one of the greatest blockbusters of its time is now lost and will never be seen in its entirety. It starred vamp diva Theda Bara and was labelled obscene for her stunning see-through outfits. The only two known remaining prints of the classic turned to ashes at fires at the Fox Studios in the 1930s and later at New York’s Museum of Modern Art in the 1950s. Only 40 seconds of what is reportedly a 150-minute work remain today.

Britartist Tracey Emin’s career soared after a tent embroidered with more than 200 names of the people she’d ever slept with went on show. The art world exclaimed ‘too much information’ when they stumbled across the names of her teddy bear, grandmother and aborted foetuses inside; but as it turns out, Emin was only being very literal about ‘Slept With’. Purchased by Charles Saatchi, Everyone I Have Ever Slept With was destroyed by a blaze that also claimed more than 100 other works including Hell by Jake and Dinos Chapman as well as works by Damien Hirst, Patrick Heron and the Chapman Brothers at storage depot Momart warehouse in 2004. Several other works by Emin were also destroyed that night. The total material damage of the fire is estimated to be $91m.

It is common practice for the literary world to consider the early works of any writer as their true essence. In 1922, at a point where none of Ernest Hemingway’s fiction had been published, his wife Elizabeth Hadley Richardson lost a suitcase with almost absolutely everything he had written up to that time, including copies. They had been married for only just over a year. It is speculated that 18 first short stories and Hemingway’s first novel were all packed into the suitcase stolen at a Paris train station, the suitcase has never been recovered and Hemingway’s early works are believed to have been destroyed.

Considered one of the Seven Wonders of the Ancient World, this enormous bronze statue depicting the Greek god Helios was one of the tallest statues in ancient history standing about 30 metres tall on an 18 metre marble pedestal. Nothing so large as the Colossus in antiquity was seen before or after its creation and some historians claim its complexity and cost led Chares to commit suicide, before seeing the work when it was finally finished. The Colossus only stood at the entrance of Rhodes for 56 years, collapsing into hundreds of pieces during an earthquake in 226 BC. The remains of this majestic work of art were broken into smaller pieces and sold as scrap metal. It inspired many other works of art, including New York’s Statue of Liberty and there is still discussion on whether to rebuild it or not.

Actor and filmmaker Jack Smith was one of Andy Warhol’s underground cinema buddies in the 1960s. Their subversive art and films quickly became targets of police raids in the United States. New York police, for the first time, confiscated a work by Warhol in 1964 during a screening of Smith’s cult classic Normal Love at the New Bowery Theater. Undercover officers mistakenly seized Warhol’s film believing it to also be the work of Jack Smith. It is reportedly a 3-minute newsreel style work that followed a prolific time for Warhol who produced Blow Job, Eat, Haircut and Kiss on the same year. The film has been misplaced and it is believed to be lost.

Leo Ribeiro is an ArtsHub writer.