In this column, our office shares what they've been watching and listening to, from classics, to blockbusters, to off-the-wall favourites.
Jini Maxwell 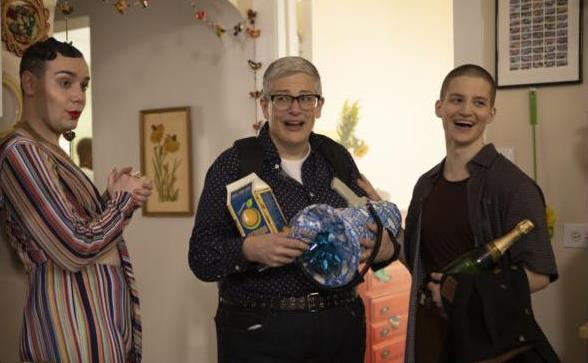 Work in Progress. Image via Stan.

As summer finally starts to calm down, we’re all feeling a little quieter, a little cosier. The siren song of the big screen (or silver screen, or phone screen) has never been more tempting. Let’s take a look at what the denizens of Artshub and Screenhub have been cozying up with of an afternoon or evening, over the last month:

Work in Progress
Available on Stan

The big office favourite at the moment is Work in Progress, an 8-part comedy series from the genius brain of comedian Abby McEnany. McEnany stars in the a semi-autobiographical role, and commences the series as a deeply depressed, middle-aged lesbian who has a photo of her therapist as the background of her phone. She surprises herself and everyone around her when she meets and falls for a very handsome and much younger trans guy, Chris (Theo Germaine). Artshub’s reviews editor Jinghua Qian says, ‘their subsequent romance is smartly written and superbly directed, and doused in all the baggage, complications and self-sabotage you cringe to witness. This dark, romantic comedy absolutely smashed my heart.’

Jinghua’s second suggestion looks equally likely to entertain and tug on heartstrings: it’s Josh Thomas’ latest project, Everything’s Going To Be Okay. A step away from the autofiction of Thomas’ stunning TV debut, Please Like Me, Everything’s Going To be Okay follows a young family in the wake of their father’s death: 25-year-old Nicholas (played by Thomas) becomes the guardian of his teenage half-sisters, Matilda (Kayla Cromer), an autistic composer keen to explore her sexuality, and Genevieve (Maeve Press), a tiny, angry smart alec.

Jinghua described it as ‘light but not fluffy, with a gorgeous dynamic between the cast as they navigate both the typical pickles of adolescence and young adulthood, as well as some resulting from their unusual situation.’

This beautiful release from Media Molecule, the studio behind LittleBigPlanet, blends game with game engine, to provide a platform for creativity that truly seems like it can be anything you want it to be.

Media Molecule’s motto is “play, create, share,” and Dreams embodies this perfectly: In this digital playground, you can make games, animations, art pieces, music, or you can explore a universe of creations from other players. This game makes trying out game design not just accessible, but joyful and fun.

Dreams offers a creative player the option to go deep and detailed on a project, but there is also a great set of preset tools that make it a fantastic platform just to mess around on, either on your own, with friends – or even with kids. If you don’t know where to start, there are already tutorials popping up around the web.

Despite having fallen totally in love with Greta Gerwig’s big genius brain in Frances Ha, I somehow missed her directorial debut, Lady Bird. Luckily for me, it’s on Netflix, and I watched it on a cozy evening, a couple of days before I saw Little Women (incidentally – I adored Little Women. It’s a beautiful reimagining of a story that I grew up with, I felt very close to it. Also: Amy forever).

The film is everything I could have hoped and more: Saoirse Ronan is bursting with the solipsistic energy of a precocious teenager in the titular role; the dynamic of her acting style with Gerwig’s direction feels utterly electric. I don’t think anyone who saw that film could be surprised that it was the beginning of a creative relationship that seems like it has so much to offer. The film is heartbreaking and uplifting, often at the same time: a must-watch for anyone who was ever a teenager desperate to escape, but not exactly sure what they’re dreaming of escaping into.

Birds of Prey is doing well in Australia (and comfortably in box offices around the world, despite doom-laden op-eds from the Gotham City tabloids), and Screenhub’s editor David Tiley had a rolicking good time seeing this one in cinema, and admired the achievements of a production working with a budget of just $130  million, which is modest for the genre.

While the action felt a little interminable at times (in David’s words: ‘Hold baseball bat. Smile at it. Cartwheel towards the green screen. Smash nuts. Repeat.’), Robbie absolutely shines in the titular role, and her physical presence in action scenes is a standout. David was also impressed by the characterisation: ‘This is high grade noir with the sexes reversed. Harley Quinn has all the dominance, violence, and fabulously defiant sense of identity of a classic noir lead, which must surely have left Tarantino sobbing with jealous rage.

‘She is witch, child, innocent and incendiarist all in one. Impulse control? Nah, curiosity rules.’
A great (if noisy) way to spend an afternoon or evening.

The Lighthouse
In cinemas now

By contrast, The Lighthouse is a much more modest film; David points out that as well as strong performances from dual leads Willem DaFoe and Robert Pattinson, and an overwhelming soundtrack from Mark Kovern, this film will stun film buffs on a technical level: ‘The real pleasure is in the camerawork from Jarin Blaschke. Almost in the old Academy 4:3 ratio, it was shot in black-and-white Eastman Double-X 5222 film on a T2.8 aperture with nowt but the characters in focus. The real experts will know that the vintage Baltar lenses are not real good compared to modern glass. You won’t see this reverence for history often.’