Our online conference will make sense of 2020 and think through the arts as an essential part of the ‘new normal’. With guests from across Australia we look at funding, culturally safe spaces, and digital as a way to expand access.
ArtsHub 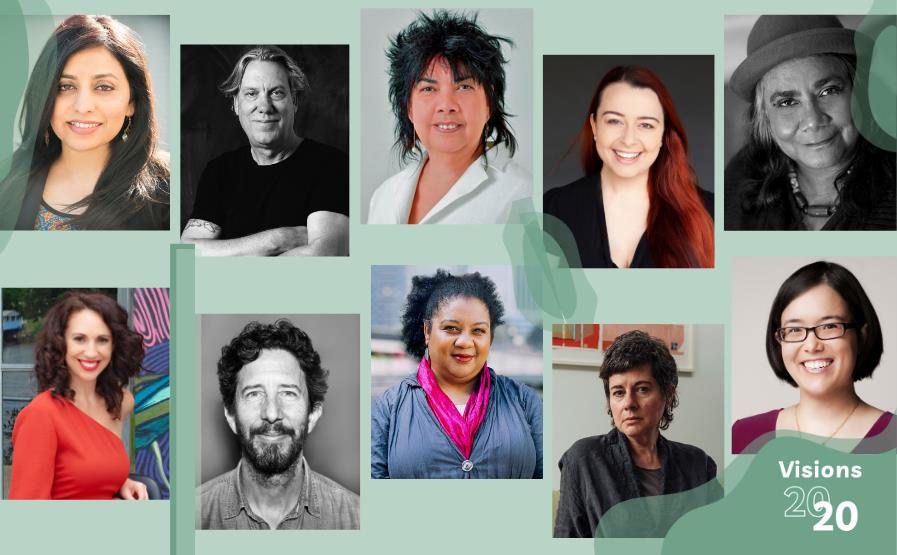 We’re excited to announce our full program. And for this week only there is an Early Bird discount. If you are an ArtsHub member then your ticket is free.

Bringing artists and arts workers together on short sharp panels, Visions 2020 will spark future thinking for the arts. From climate change, to funding, to appreciating hyperlocalism, this unmissable event surveys what we’ve been through and looks for new ways of seeing the future.

But it’s also an event based in the arts’ long and rich past. Visions 2020 marks 20 years of ArtsHub’s journalism on events, exhibitions, performances and opportunities. While we can’t give you cake, we want to celebrate by bringing together the sector and asking: what do we want the arts’ ‘new normal’ to look like?

In a world dominated by colonial preconceptions, casual and unconscious racism can create unsafe environments for artists of colour and First Nations artists. This year, anti-racism activists became too loud to ignore and artists have been at the frontlines of calling for change.

The ‘Creating culturally safe arts spaces’ session will explore what cultural safety can look like so artists can thrive, both in big institutions and culturally-specific arts spaces.

Chaired by Ana Tiwary from Diversity in Australian Media, this panel will look at safe spaces on and offline. Tiwary wrote an article for Screenhub which then spawned the Facebook group and movement which looks at centring artists of colour.

She’s joined by Dawn Casey, the first Indigenous director of the National Museum of Australia, who knows how Australia’s largest cultural institutions can be made more welcoming for First Nations arts workers.

Funding for the future

Funding is the constant question for everyone in the arts, but what if we started thinking beyond the usual models? ‘The future of funding’ looks at creative ways of funding arts organisations including becoming less dependent on traditional funding and becoming more self-sustaining.

Dr Jackie Bailey (from BYP Group) will facilitate a session that includes Shelagh Magadza, Executive Director of the Chamber of Arts and Culture Western Australia, who brings her expertise on strategic arts funding initiatives.

Bailey and Magadza are joined by Dr Terry Wu, winner of the Emerging Philanthropy Award 2019, who is known for funding projects that give artists vital time and space to create.

With COVID-19 putting more of the arts online, more works and events have been made available to disabled and regional audiences. But some artists and audiences continue to be excluded as accessibility is still an afterthought.

As we move into a new normal, how do we make enriched accessibility a starting point for the arts?

Gayle Kennedy, First Nations poet, editor and disability advocate, will bring her incisive and no-nonsense perspectives. Recently she told ArtsHub, ‘[The digital pivot] happened really quickly, without any real fuss, and the reason was because able-bodied people needed it. To think we [people with disabilities] have been sitting with our noses against the window panes for so long, and then bang. We are not going to go back.’

And what about if your whole festival featured artists with disability? Madeleine Little, Recipient of the 2019 Arts Access Australia National Leadership Award, did just that as Director of the Undercover Artists Festival and this year had the challenge of moving the whole event online.

Joining to steer the conversation, Hanna Cormick brings her performing arts expertise and her experiences curating PLATFORM Live, the online festival by and for the disability community and an accessible pop-up space which tours regional NSW.

We Are all hyperlocal now

As much as the arts have pivoted online, 2020 has also brought us all back home to appreciate our own cultural backyards. Many of the country’s biggest and brightest festivals have had a hyperlocal renaissance.

Brian Ritchie, Music Curator at MONA has been programming their FOMA (Festival of Music and Art) ‘glocally’ since long before the pandemic. Not only does the festival engage richly with local communities in Tasmania, but it draws in new artistic communities and tourism from around the country and the globe.

Further north, Artistic Director Louise Bezzina steered Brisbane Festival into uncharted waters this year, defying all the odds to deliver one of the only live performing arts events globally in the immediate wake of the COVID-19 pandemic. Under the theme ‘Boldly Brisbane’, Bezzina brought a record number of local artists into the fold and reached all – yes, you read that right – all 190 suburbs of Brisbane.

The two seasoned curators will dive deep into their experiences with festivals focused on local community – as well as putting their heads together to imagine exciting hyperlocal futures in Australian festival organising.

With a long history of protest, the arts are now raising their voices for climate action. As well as reducing the impact of arts practices, they have a unique role in bearing witness and advocating for radical change. How can different artforms respond to crisis and mobilise audiences into action?

José Roca, the Colombian curator who will head the next Biennale of Sydney, will bring his international expertise on the visual arts to the table. Roca’s work is heavily informed by the interplay of art and nature. His Biennale is set to centre sustainability as a key principle, not only in artworks but through measures like reducing travel during exhibition organising.

Esteemed author, editor and former publisher Sophie Cunningham AM joins Roca, speaking about environmental change. She has written several books focusing on the environment but recently edited the collection Fire Flood Plague: Australian Writers Respond to 2020 asking writers, scientists and others to look at the most urgent problems of our present.

Cunningham told ArtsHub that she learnt from editing the collection that writers feel ‘… there is only hope if we engage with our reality, rather than deny it… [Only] then we can start to talk and think about ways we can move forward.’

Book your tickets now to join this vital discussion on the future of the arts. Early Bird discount available until Friday – get in quick! Members tickets free.