Vimeo gets more vim between toes of giants

As Vimeo sends a curator to the St Kilda Film Festival, we track its recent surprising evolution into SVOD and original programming.
David Tiley
[This is archived content and may not display in the originally intended format.] 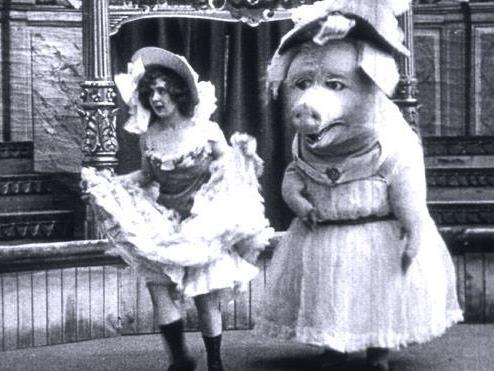 Image: even the Sheffield National Fairground Archive has a toehold on Vimeo. But we want more.

Two years ago, Peter Gerrard and Jeffrey Bowers represented Vimeo at the Australian International Documentary Conference. In their casual, youthy way they revealed a service which is pretty well unique because it is totally embedded in the values of the screen production community. With a strong indy twist.

Now Jeffrey Bowers is coming to the St Kilda Film Festival wearing his Senior Curator hat from the company which carries ‘human-curated’ as a badge of honour.  ‘We are actively going out to film festivals to find the best short films and premiere them on our site’, he said on the phone from New York. ‘We are guaranteeing 150,000 views of each of these films. We will create supportive editorial and interviews with filmmakers. We do one of these each week and premiere a new film.’ He calls it Staff Picks on Steroids, officially known as Staff Pick Premieres.

There have been some startling changes over the last two years, though some of them are mostly conceptual. ‘It is still growing. It still works and has been expanding ever since the last time we talked. Since then we have gathered over 60,000 titles. It is the largest open platform for transactional video in the world.’

It is currently quoting 25m members, 715m video views and 80% annual growth around the world. There are 42m viewers in the US, but that is only 30% of its audience.

Early in the take-off Vimeo built a way for its subscriber channels to run on a subscription service, like a tiny version of Netflix. The company also  set up Vimeo Originals, in which they identify the best performers in their members, and invest in further production, spending around US$10 -12m/year at the moment. They cover everything, from web series to comedies, original documentaries and animation. And musicals.

555 from Andrew DeYoung on Vimeo.

Rolodex of Hate from Bianca Del Rio on Vimeo.

Around the same time, Vimeo acquired VHX, another New York based OTT provider, and left its shopfront in place. Some Australian filmmakers like Rebel Films have been happy with that service. But Vimeo also absorbed VHX’s suite of specialist tools, which are better adapted to mainstream providers like broadcasters and studios.

In 2018 they expect to emerge as their own fully fledged SVOD service, so users can roam around content for a flat monthly fee.  As Bowers said, ‘We are also launching a subscription service so we are getting into the game of Netflix and developing more original content where you will have access to all this original TV shows and movies and short films.’

There is some serious chutzpah in this idea. A huge amount of money is now sloshing around the festival circuit and markets, mostly in the pockets of Netflix and Amazon. They are busily pricing everyone else out of the marketplace, and taking over the more traditional arthouse cinema space.

Amazon, for instance, bought five films at Sundance, and then bought twelve more for its Amazon Prime streaming program, offering up to a $100,000 bonus because they had been at the festival. That deal includes Manifesto, the video installation by Julian Rosenfeldt which stars Cate Blanchett and ran at the Art Gallery of NSW and ACMI.

This looks like racing a steam train with a tricycle. Basically, Vimeo offers ways of storing and streaming projects at a variety of different but modestly priced levels, starting with free, with $6, $17 and $50/month at the the other levels. You can put anything up as long as it fits some basic community standards, and it can be embedded across the net.

BUT that is only the most basic public face. If Vimeo likes a film, it will promote it. It can put it on its pay-per-view streaming system with a simple payment model, varying levels of promotional support, and simple legals. For this it charges 10% of the income plus transaction costs.

The most obvious advantage to audiences is the video quality. According to Bowers, ‘We don’t compress so the bit rate is much higher, so we can have buffer issues.’ He is keenly interested in the state of Australian broadband for that reason. ‘But in the last two years we have moved to adaptive stream playing which assesses the level of bandwidth you have and adjusts the quality of the films.’ The stutter is disappearing.

At the same time, Vimeo is positioned as a premium brand, in direct contrast to the enormous unfocused, ungated river of material which flows through Youtube and Facebook. Youtube has at least a billion users and claims to provide at least a billion clips per day, with 70% on mobile. They are both shaping our experience with algorithms as the systems learn our tastes, but democracy rules.

What is more, said Bowers, ‘We still have a product with no ads. Our team and even our top brass really respect our audience and our product. Everyone is going toward ads as the only way to make a tenable return, but there are other interesting ways that we can can rely on our community.’

In fact there are some banner ads and a lot of  cross-promotion which creates an internal story about friendliness, trust and shared values. They have the income from premium members paying for their hosting service and the ten percent from their 60,000 pay-per-view titles.

But there is also a parallel world for Vimeo, which takes advantage of that commitment to quality. It fits neatly into branded content – hit search for BMW, for instance and you will find the high octane branded shorts with a huge amount of community content around the company. Go to Vimeo Business and you find the video marketing, hosting and analytic tools and a kind of mini-studio. ‘Work with our community of creators to bring your stories to life.’

That is part of the way in which Vimeo is engaging with its own filmmaking members.The Video School section provides learning materials which are unashamedly basic. The Share the Screen program has a variety of empowerment initiatives to support women, including felllowships and a Diversity and Inclusion HQ team.

None of this looks like mega-capitalism. But: Vimeo is armed with the greatest tool of social media – it stays extremely close to a large, knowledgeable and loyal audience. Netflix and Amazon as companies have nothing to do with their member base beyond the fact that everyone buys milk and petrol. They are all things to all people, and quality is a function of clicks.

Besides, Vimeo may look chirpy and local but it also has a substantial warchest. That service and branding model is healthy in its own right. It was originally set up as part of Connected Ventures, a company which did very well out of specialist youth oriented sites through CollegeHumor Media. It was taken over by publicly owned tech conglomerate IAC (InterActiveCorp) in 2006, so Vimeo is now firmly established. For the last eighteen months, Vimeo and IAC have shared a CEO.

Even though Vimeo is addicted to simplicity, to doing more with less, it still has tens of millions of dollars of its own to spend on acquisitions.

Jeffrey Bowers has brought his own program to the St Kilda Film Festival, which comprises eight of his favourite shorts lined up to demonstrate the range of material. It runs on Sunday May 21 at 7.30pm.

‘St Kilda is a really interesting film festival,’ he said, ‘because it is an Oscar qualifying festival. It is exhibiting lots of great Australian filmmakers who we can help get seen around the world. We will look through all of them.’

The ethos of the company is neatly demonstrated by its commitment to Virtual Reality. It has built a site called vimeo360, which has all its characteristic elements, but demands the fat gnarly files which need a 4K Ultra HD player. It collects and displays projects, provides educational materials, and enables a marketplace. And yet, said Bowers, ‘No-one understands the medium. I have not seen anyone who even pretends to. It is very much in its infancy. We are still trying to get content people want to access, and figure out the basic systems about editing and shooting. But it doesn’t mean the content is not interesting – it is fascinating for the very reason that it grapples with technology and immersion.

‘It is a whole new medium, not film and not video games – it is different. It depends on the intent of the creator. Some people say the story is immersive because you look around 360 degrees but it is not immersion like games. It depends on point of view and how much you want to control what you look at. Whether it is more narrative or more experiential.’

Use your mouse to move around the expanded frame.

This year, he told me, at Tribeca people were playing with body suits and smells. [Not at the same time].