Lynette Wallworth, new technology pioneer, took an AIDC 2020 audience through her latest VR work, made with the Awavena people in the Amazon jungle.
David Tiley 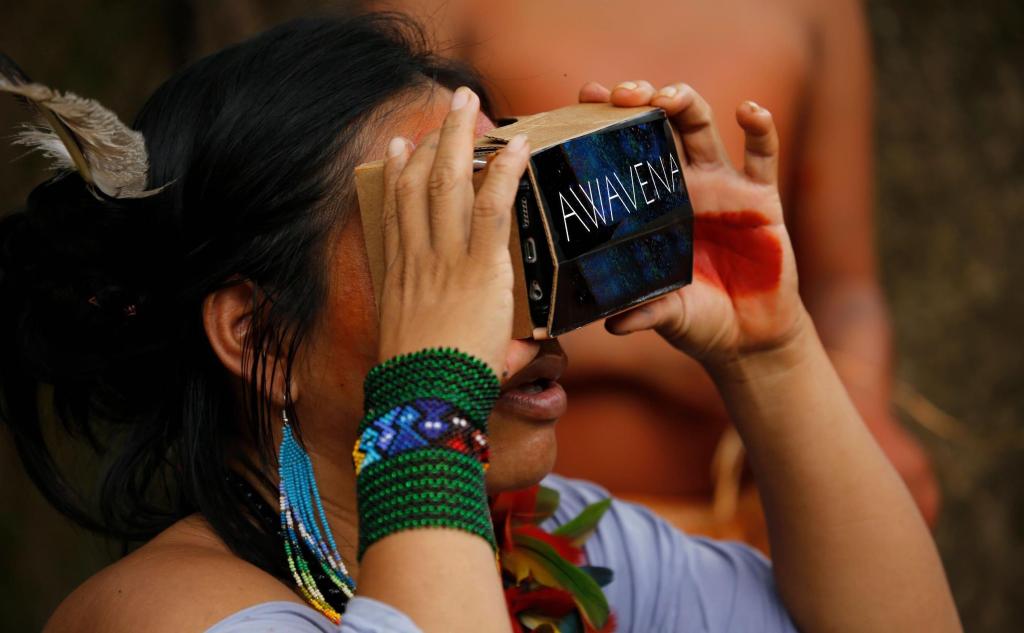 Hushahu looks at dailies in a cardboard VR headset. Photo by Greg Downing.

Lynette Wallworth is an Australian pioneer of screen and digital technology with a keen sense of cultural context and social responsibility.  She came to a wider stage with Collisions, a VR work made with an Aboriginal community which remembered the Maralinga atom bomb tests.

Her presentation at AIDC 2020 described her recent work on Awavena. What struck me most, far beyond the stories of technology, is the origin story for the whole project.

‘So Awavena emerged because the Chief of an Amazonian tribe was visiting in Oxford, England, at the Skoll forum for social entrepreneurs where I sometimes go as an advisor for Sundance. He put on the headset that showed Collisions, and when he took the headset off, he had an absolutely clear comprehension of the way this particular technology could be of use to his tribe.’

Tashka Awavena was born into a jungle tradition, with all the beliefs and logic and medicines of his people, as they were brutalised by rubber barons and decultured by Christian missionaries who prevented them from practising their culture and speaking their language.

‘He said this: I understand what these glasses do. When I put them on they act like medicine as in Ayahuasca medicine, which we use in our tradition to move into the vision state.

He said it does this: It  opens a portal, it carries you without your body to a place you’ve never been. It intensifies colour and sound. You meet the elders, you’re given a message and then you are returned to this reality. We can use this my friend, you’re going to have to come to the Amazon. It was very specific. It was a very clear direction for the technology, which is the thing I love.’

Wallworth has worked at the forefront of technological development with people who think in very narrow ways.

‘There’s not a lot of diversity when you walk into those rooms. But when the technology gets shifted to other hands, you get other uses emerging. And for me, that’s where the potential lies.’

This may sound like a story in which the wise tribal people intuitively understood the power of virtual reality technology. In fact Tashka Yawanawa became so sick with an introduced Western illness as a child that tribal medicine failed and his family allowed him to be sent to a Western town. Marked as a potential missionary, he rebelled, and ended up studying in the US, so he speaks fluent English. The first tribal resistance started in 1981 and the Yawanawa have worked on several short films with different filmmakers, though VR was new to them.

Wallworth came to their traditional lands as a guest and partner to tell the story the Yawanawa decided to share with the world. It is about a transforming cultural change created by gender rebalancing to protect and energise their traditions.

It is about the tough old shaman, Tata, who embodies the rituals and holds the knowledge. He was around 80 years old when a young woman, Hushahu, begged him to train her as a shaman. But there had never been a Yawanama woman shaman. That doorway to their spirits is held by men.

‘And what I find so moving about this story and why I felt it was the work that should be sent out, is because that old shaman risked everything. He risked his spiritual authority. He decided that he wouldn’t refuse the training.

Because he was able to use the experience of his own loss of agency, which had come about through the Christian missionaries, and the time of enslavement by the rubber barons, he could make a transfer on to what it meant when a young woman stood in front of him and said, “This is who I feel myself to be”.

‘So he accepted her, and she had to undergo 15 months of training. She had to be exposed to all the medicines that the shaman must use which goes beyond the skin itself into the plant medicines and animal medicines.

‘She said at times she felt she was going mad. Then visions started coming to her. And in those visions came songs, and she would return and sing them to Tata.

And he would say “Oh, that is the anaconda song that we’ve been missing”.

“This the frog song that we have forgotten.”

And the men of the tribe said, “if we were wrong about that, what else might we have been wrong about?” And eventually they decided to change every leadership structure within their society to make space for women.

When Lynette Walworth told this story in another place, she said

‘When we were planning for our shoot, the Yawanawa sent us a message, Tata the old Shaman was dying, and we should send cameras quickly so his message could be shared. We were privileged to have our cameras there while Hushahu tended to the gracious old man who had trained her.

‘We returned to the community some months later so Hushahu could hold a vision using the traditional medicines. That vision is precisely the gift the Yawanawa want to share. VR seems purpose built for this challenge as it places the viewer central to the unfolding scene and allows us, for the first time, to see the world as Hushahu sees it, transported in her mind’s eye by the medicines Tata trained her to use.’

The project brought the transforming tools of modern science. They used a lidar scanner to record fantastic amounts of data from the forest, and filmed the fluorescence which humans can’t see. She enlisted Dr Anya Salih from the Confocal Bio-imaging Facility at the University of Western Sydney, and specialised cameras from Canon and post production support  from the Technicolor Experience Centre in California. She built a vision of the community’s grandmother using fluorescent species as a vast colony of creatures. When Hushahu saw the footage, she said she had already seen those colours, but only when she was taking medicine in her rituals.

‘When we met at the Sundance/Skoll Stories of Change Lab to plan our work ahead I asked, “What essentially must the vision show?” and Chief Tashka answered “That everything is alive and that the forest is aware of you.”

We carried in three canoes full of technology; multiple cameras and scanners, all to reveal what the Yawanawa have always known.’

The Yawanawa do think in profoundly different ways to Europeans, and they did have a remarkable insight into virtual reality. There is even some magic in this story. Lynette Wallworth was linking forefront technologies in a project on the edge of the possible. As she said later,

‘When the technical challenge seemed almost insurmountable, I would call Chief Tashka and let him know. Within 24 hours I would get a message, “The shamans are in ceremony for you. Don’t worry, all will be well.”

The technical story and a piece from the Yawanawa’s point of view are contained in the full press kit.