Two public meetings, two different states, as the emerging sector begins to respond to the cuts and refocusing planned by Screen Australia.
David Tiley
[This is archived content and may not display in the originally intended format.] 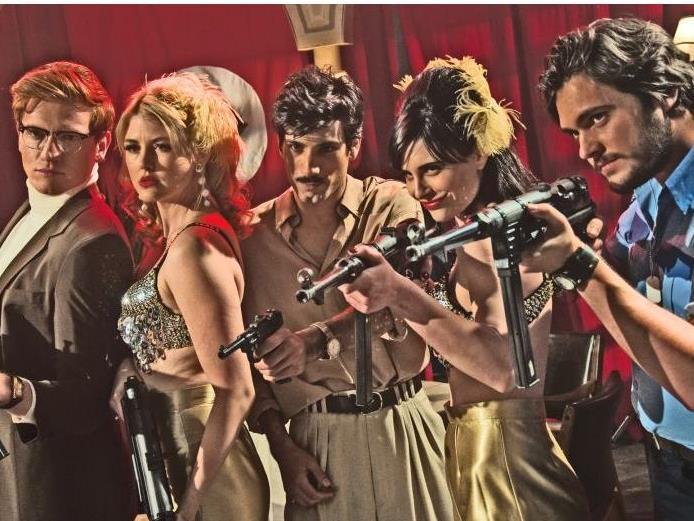 Defending diversity – one program at a time. Image: still from Danger 5, made in the unique local production culture of South Australia by Dario Russo and David Ashby.

You’re On Your Own Now Kid, the public forum about the decline in support for emerging filmmakers run at Metro Screen in Sydney last night demonstrated just the opposite.

Emerging filmmakers and the Screen Network organisations that support them are very much not on their own.

Notable in the audience were Sally Caplan, who is the head of production and development at Screen Australia, Maureen Barron who leads Screen NSW, Matthew Hancock who runs the policy desk at Screen Producers Australia, and Martha Coleman, now at Goalpost Films but until recently the head of production at Screen Australia. Tom Zubrycki and Martha Ansara added a veteran documentary edge as well. Kingston Anderson was there for the Australian Directors’ Guild.

The forum is a response to the announcement by Screen Australia that it will defund the Screen Network organisations around the country in eighteen month’s time.  But the presence of key players in the industry support system clearly indicates that this has triggered an active search for solutions which can include the traditional sources of agency support.

On the same night, Adelaide’s Media Resource Centre also held a forum to discuss the same issues. It had a starker version of the background:

‘Screen Australia faced 8% cuts and made 30% of them by significantly reducing services and opportunities to the emerging sector.

No evidence has been provided by Screen Australia to demonstrate why this was the right choice in the face of their tightening budgets.

The cuts to the emerging sector include the total removal of funds to the Screen Network including the MRC and $400,000 from the Talent Escalator program.’

According to MRC CEO Gail Kovatseff, they too had a full house, which means a hundred people from a small city. It was organised formally, with seven people presenting a point of view, which included Richard Harris CEO of the South Australian Film Corporation on the larger filming landscape, and Joost den Hartog from the Australian International Documentary Conference, who is very clear on the needs of emerging digital practitioners and the larger changes in models.

‘The difference between the range of opportunities which exist now compared to what will happen is massive,’ she said on the phone. ‘It is a striking difference, and a lot of young people are really stunned by how few opportunities will be available.’

The experience of emerging filmmakers in South Australia is very different from Sydney, which contains the majority of production and production companies. Said Kovatseff, ‘We don’t have the income streams that other states have, but we actually have a very strong community, and a client engagement program.’ It is more focused on production opportunities and less on training, a mainstay of both the Sydney and Melbourne Network members.

The MRC runs two cinemas, and has changed very little since it was set up a filmmaking co-op in 1975. So the impressions gathered from the meeting will go back to MRC members, and be managed through them in the longer term.

In Sydney, the mood seemed to be gentler, reflecting a wide range of informal opportunities for emerging screen creators. Kath Shelper’s co-chair Marcus Gilleazeau said afterwards, ‘Where the evening started with a sense of gloom, by the end of it the mood had completely turned around. People felt very much empowered and able to do something positive to ensure that the emerging sector gets what it actually needs to go forward.’

The overwhelming sense of the meeting was that the emerging sector does need ongoing institutional support. We do not work in a set and forget marketplace in which the industry can expect to renew itself by simply creating productions and companies and expecting emerging creators to seep into the works.

The meeting also confirmed the vital place of diversity and new voices.  The engine room of the industry is original ideas, and the organisations and funds to ensure that they can be turned into practical projects.

Left to itself, the sector runs the real risk of becoming increasingly middle class, and white, and male – all those tendencies first identified in the 1970’s when the SROs were originally conceived, and now even more likely in hard economic times.

According to Kingston Anderson, ‘It was a great turn-out. I turned around the cinema was full – and that is surely a good sign.’ The cinema seats two hundred people.

There is now a general feeling that the changes of the last ten years have created an enormously different context and set of tools for emerging screen creators. The very fact that we can’t just say ‘film and television’ any more is a key indicator of the tectonic shifts.  ‘It is obvious that the ground has now shifted radically,’ said Anderson. ‘In Sydney alone there is a plethora of tertiary institutions producing film, TV and new media graduates, and you have the TAFE sector as well.

‘The issue is how they move into the industry. One thing brought out last night is that new people and perspectives are also the crucible for ideas.  People come to Metro with an idea to make a film, and come in from different backgrounds, and in different ways.’

Metro is now assembling the information and ideas gathered last night to create a detailed picture.  So far, it is clear that the organisation and the emerging sector will do some solid empirical research, and that a working party will be set up to create practical solutions.

That simple statement opens up the possibility of dramatic changes. At issue is not the survival of one kind of funding mechanism, but the whole nature of renewal, and the way in which the screen creators in our complex society can be resourced in a time of intense change.

There is a real feeling of regional diversity building up around this one triggering issue, which points in itself to the value of diversity and grass roots engagement.  As each community asks itself about the local pathways to renewal, we can expect answers which extend well beyond approaches which focus on the traditional industrial model.