Sam Cotton's cute 'Ani-mates' won the $15,000 TikTok pilot pitch comp at Screen Forever, but across several panels we heard from creators and execs about how to engage in less than a minute.
Rochelle Siemienowicz 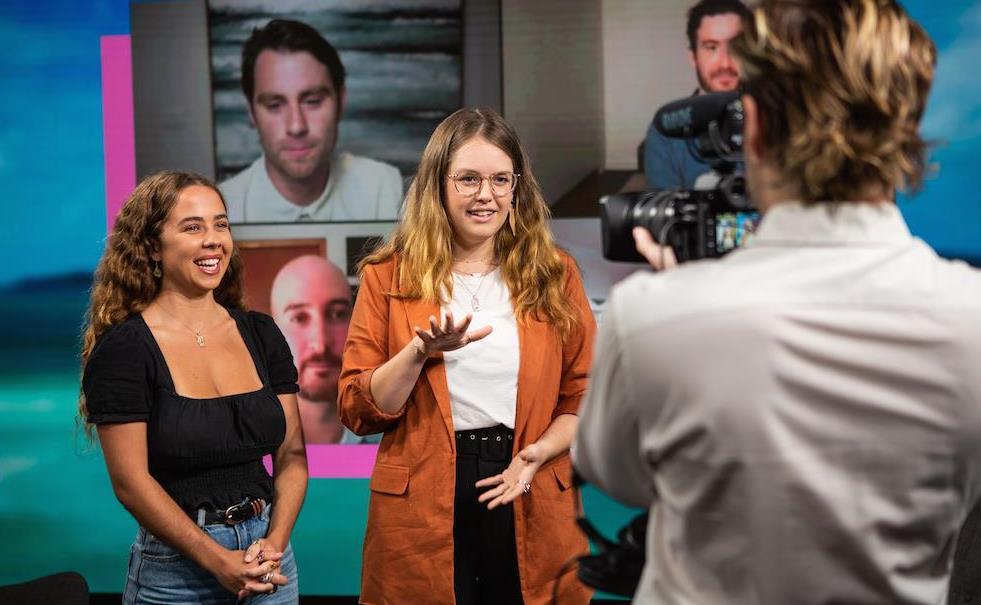 How much can you communicate in less than one minute? A lot, as any advertiser or short filmmaker knows. But for those of us over the age of 30, the idea of genuine storytelling on phone screens, in less than one-minute snack-bites, feels, well… so convince us.

The appeal of TikTok remains baffling to many a Mum and Dad, but if there was one take away from Screen Forever’s  panels around ultra-shortform content, it was: ‘Get over it, and let them get on with it.’

This is where young eyeballs live, millions of them according to data *, and they’re hungry for creative arresting, ultra-shortform content. Creativity, craft and connection can happen on TikTok, the world’s fast growing social media platform, and it’s a worthwhile proving ground for our emerging screen makers.

For the first time, TikTok, SPA and Screen Forever collaborated on the ‘Got a Minute?’ initiative, which called for participants to submit a pilot for a high quality 10 x 1 minute series. A live pitching competition was held at the conference last week where the three finalists screened their 1-minute pilots and answered questions from an industry panel comprised of: Yeesum Lo, Head of Development, 10 ViacomCBS, Felicity McVay, Director of Content TikTok Australia and Lee Naimo, Senior Investment Manager, Online, at Screen Australia. Hosting the panel was actor Jimmy Rees.

The panel awarded votes out of 10, with the winner taking home $15,000 to boost the production of their series and the two runners up getting $5,000 each.

The winner was actor and animator Sam Cotton with his pilot for Ani-Mates, an extremely cute story about Salty and Pep, a salt and pepper shaker who are best friends, but separated when one of them has his ‘last shake’. The judges commended its emotional effectiveness and the way it made us feel invested immediately. It has over 1 million views already.

Read: Meet the buyers: What do they want in scripted and factual?

Quietly spoken and self deprecating, Hobart-based Cotton, who already has a significant TikTok following, told the panel he had been driven to creativity by loneliness and boredom during lockdown. ‘Basically at the beginning of the pandemic, because we weren’t allowed to socialise, I sort of wanted to make some mates to hang out with I guess!’ he said. He was drawing with his finger on an iPad with a $2 app, which he plans to upgrade, and he does all the voices and singing himself.

Cotton wanted to make an episodic series about relationships between objects that was a metaphor for human relationships. He will use the winning funds to get better tools and make more episodes about different objects, ‘like one idea right now is to have a grape that wants a date with a date, but it’s a bit pale and insecure so decides to climb up into the window to get a tan, and cut to a few hours later, he’s a sultana.’

As for what he wanted the TikTok series to do for his career, Cotton said he’d like to use it as a launching pad for a series of comedic animations that showcased Australian humour and culture to the world.

The finalists were Katia Mancuso, with her moody user-generated ‘choose your own adventure’ horror pilot Beneath the Darkness; and Hannah-Rae Meegan and Monique Terry’s queer romantic high school comedy The Formal (@TheFormalSeries), which already has over a million views and 75,000 followers. Those are audience numbers traditional media only dreams about.

Meegan and Terry said they’d met at AFTRS and had become such close friends that everyone assumed they were a couple. They perform in their pilot as two mismatched girls trying to organise publicity for the school formal. Getting the Hemsworth’s to attend to ‘set the vibe’ (‘they’re in Byron, only a 9-hour drive away’) is just part of this smart well-acted comedy that uses fourth wall-breaking glances to camera to establish intimacy.

If you’re curious to watch all the entries, you can search TikTok for #ScreenForever #GotAMinute.

What makes a good TikTok?

Arresting attention in the first second is key to getting the message across. You might think a certain amount of cynicism would be involved in grabbing attention in one second, but ‘authenticity’, ‘sincerity’ and ‘relatability’ were words used a lot in reference to success. So too vulnerability, as seen in Ani-mates.

The human face is king (or queen) here. But as with Ani-mates, that face can also be animal, vegetable or mineral if it’s got human expressions drawn on.

The human face is king (or queen) here. But as with Ani-mates, that face can also be animal, vegetable or mineral if it’s got human expressions drawn on.

‘Fundamentally, TikTok is all about inspiring creativity and bringing joy,’ said TikTok’s Felicity McVay. ‘That’s why people come to the platform. First and foremost we’re an entertainment platform and we really celebrate diverse storytelling where underrepresented voices can find a home.’

A key form of engagement on TikTok comes from incorporating comments back into new content and feeding them into the storyline, which is a feature of the app.

As McVay said: ‘We’re seeing the rise of collaborative creativity where users have the ability to jump on a trend or to build a creative experience.’ She cited examples including Ratatouille: The Musical, which came out of somebody recording a song for a non existent musical, and the viral sensation of The Wellerman sea shanties.

Insights on getting engagement on microprograms

As Investment Manager of Online at Screen Australia, Lee Naimo’s whole department was set up to fund shortform creators on new platforms, working across ABC iView, and SBS On Demand, YouTube, Instagram and TikTok. Naimo himself has experience as a viral performer being formerly one third of musical comedy troupe The Axis of Awesome.

He hosted another panel at the conference entitled ‘Like, Comment, Subscribe’, all about getting social media engagement on microprograms. The speakers were Hayley Adams (TikTok rom com Love Songs, and Scattered); Jackson Lapsley Scott (Retrograde) and actor and creator Jenny Zhou (YouTube’s Girl Interpreted).

Most shortform content on these platforms is still a hobby, though on YouTube there’s AdSense, and with TikTok you can make it with a brand.

Most of these creators are just doing it for the love of it, with some government funding, as proof of concept for larger stories on other platforms. That may change very quickly.

*According to data published by Comprar Acciones, TikTok was the top-grossing non-game mobile app globally in January 2021 with users spending $128 million on the app, up by 380% from its January 2020 revenue. A report by Apptopia said there were 89 million installs of the TikTok app in 2020 from the US alone. (By comparison, Instagram had 62 million, Facebook 53 million, and Snapchat 51 million.)