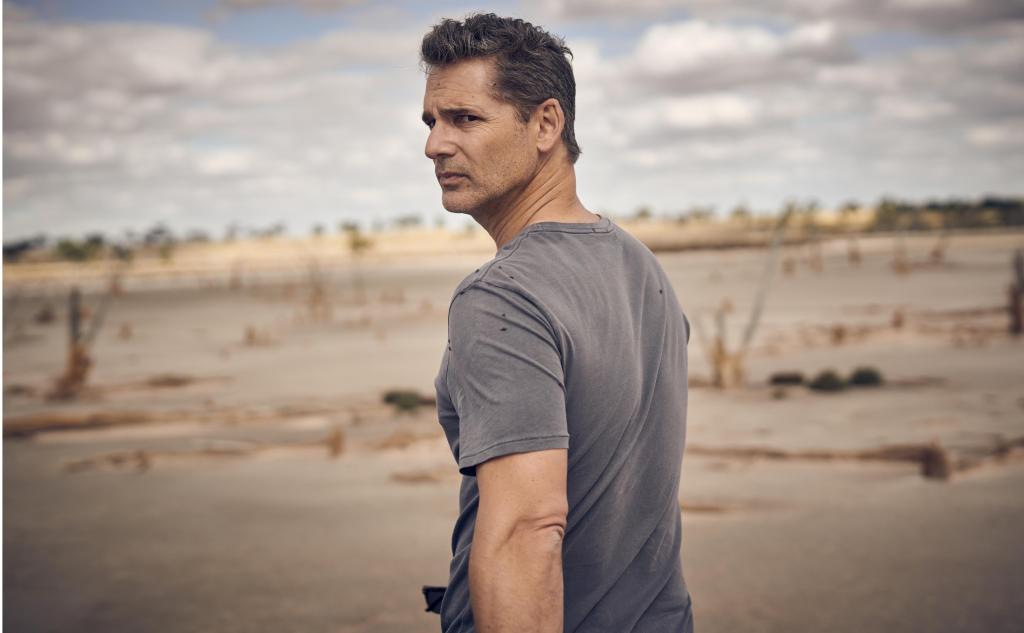 Eric Bana in The Dry. Image via Roadshow.

In his first Australian film role since 2007’s Romulus, My Father, Eric Bana stars in Robert Connolly’s big-screen adaptation of Jane Harper’s bestselling crime novel. Those who loved the book won’t be disappointed: the screenplay by Connolly and Harry Cripps faithfully renders the plot, including its digressive flashback sequences.

Australian Federal Police investigator Aaron Falk (Eric Bana) returns reluctantly to his hometown, Kiewarra, for the funeral of his childhood best friend, Luke Hadler (Martin Dingle Wall). Everyone in town assumes Luke, a drought-stressed farmer, murdered his wife and son before turning the gun on himself; but Luke’s grimly grieving dad Gerry (Bruce Spence) believes otherwise. He wants Aaron to look into the case – and he’s calling in an old debt.

Gerry knows Aaron and Luke lied about their whereabouts on the night their close friend Ellie Deacon (BeBe Bettencourt) drowned mysteriously in the river. (In the book this happened 20 years ago; but having cast the Gen-X Bana, this film pushes Ellie’s death back to 1991.) Indeed, many in Kiewarra suspect Aaron killed Ellie – chiefly, Ellie’s dad Mal (William Zappa) and her cousin Grant Dow (Matt Nable), who ran the teenage Aaron (Joe Klocek) and his dad (Jeremy Lindsay Taylor) out of town.

But Aaron’s teenage memories keep welling up, saturating him like Kiewarra’s missing water. Or like the invasive rabbits that Luke and Jamie were allegedly shooting, and that Luke’s former girlfriend, Gretchen (Genevieve O’Reilly), is also a suspiciously dab hand at putting down. These are my own metaphors, though. While the film is well crafted, it’s unfancy in a way that feels televisual rather than cinematic – as laconic and pragmatic as its characters.

The Dry frustrated me because it felt like an each-way bet: it has a go at both moody psychodrama and mystery narrative, but not emphatically enough to really satisfy on either ground. The procedural swiftly picks up and dismisses suspects and clues without much genuine suspense, and the final stand-off with Luke’s killer, and the revelation of how Ellie died, happen in a rush and don’t pack the punches they should. Stefan Duscio’s (The Invisible Man, Judy & Punch) cinematography seems weirdly bland, making Kiewarra’s economic desperation and buried secrets feel like a photocopy of Wake in Fright.

Perhaps in a miniseries format, the characters and their backstories could have had more space to breathe. O’Reilly’s Gretchen is a charismatic presence: proud, capable, and sexy in a McLeod’s Daughters way, yet weighed down by sadness. Nable is fantastic as Grant, a menacing Aussie dickhead. And as Raco’s pregnant wife Rita, Miranda Tapsell has a clear-eyed, no-bullshit fierceness that makes her stand out from the more vaguely drawn characters.

It’s worthwhile noting that Tapsell’s Aboriginality goes unremarked-on in a story about white people’s trauma and relationship to the land – unlike the similarly themed but much more sophisticated films Mystery Road and Jindabyne, which directly tackle the intersections of race, gender, landscape and justice.

Particularly because of its repeated use of overhead tracking shots across dusty paddocks, The Dry invites unflattering comparisons to Ivan Sen’s much more assured command of mood through striking visuals. (Hats off, however, to set decorator Leah Popple for putting a framed racehorse portrait on one character’s wall – a subtle narrative clue for an alert viewer.)

The film’s strength is the way it overlaps Aaron’s flackback sequences with his present-day pilgrimages to the now-desiccated sacred sites of his youth. Here, as Aaron remembers the milky-brown river water and gentle grey-green foliage, Ellie’s river-damp skin and her campfirelit face, the drought finally feels like a genuine metaphor for his loss as he walks through those same trees, now dead and colourless, and along the canyon the river has become.

There’s something intelligent about Eric Bana’s screen presence that always makes him a pleasure to watch, even though he’s sometimes seemed miscast. (King Arthur’s dad? A vengeful Romulan? A time-travelling romantic? Henry VIII?) He’s great in The Dry, which should satisfy Australian viewers looking for a solidly entertaining film. Perhaps its setting will also appeal to international viewers – are heat and drought an exotic answer to the snow in a Nordic noir?

But I found myself wishing for more – just as Aaron screams in frustration when he turns on the shower, but the tap yields only a muddy trickle.