Parrtjima is more than a light festival; it’s a celebration of Country

Some of the world’s oldest cultures merge with the latest digital technology to deliver a light festival in the heart of Australia’s Red Centre that welcomes all to embrace language and Country as a shared future.
Gina Fairley
[This is archived content and may not display in the originally intended format.] 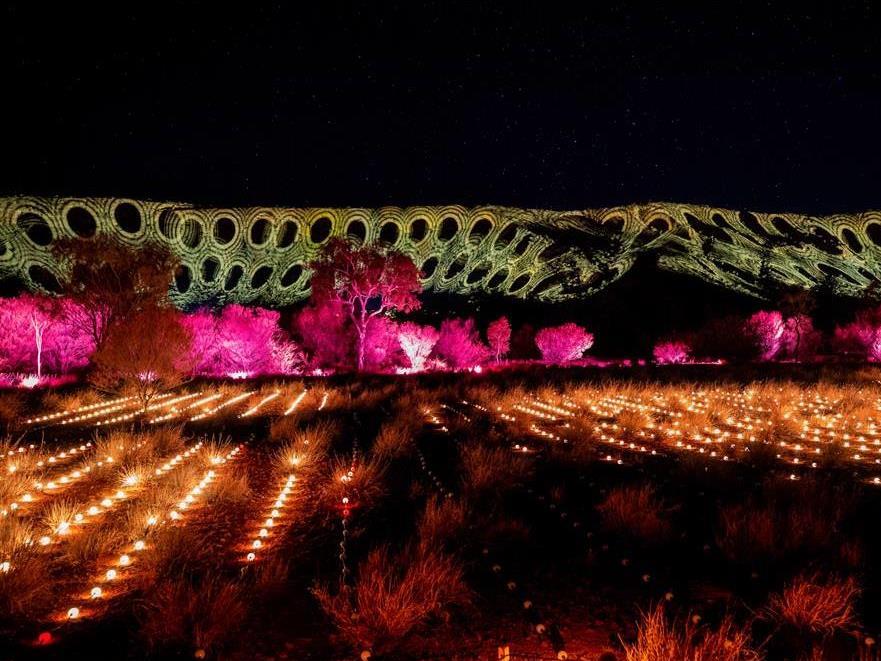 Many countries across the world today celebrate culture through light festivals, but there are few that can claim to bring to life a continuous culture that reaches back to time immemorial, on the very land where those stories have been handed down for generations.

It is not surprising then, that Parrtjima: A Festival in Light is a special event.

This year, the Festival returns for 10 days, from Friday 5 April to Sunday, 14 April, held in Mparntwe: also known as Alice Springs, in Australia’s Red Centre. The only First Nations light festival in the world, this year Parrtjima takes its cue from the United Nations Year of Indigenous Languages, adopting the theme Language Expressions.

When it comes to keeping the festival fresh, Roberts told ArtsHub that one of the big things this year is that it includes installations the artists themselves have constructed by hand, rather than having their concepts realised.

Roberts said: ‘We have looked at language, not only the mother tongues of homeland, but also how Aboriginal people use the English language and way they have created their own language. For example, the language of stockmen.’

She continued: ‘For generations, the cattle industry in the Northern Territory has been built “on the backs of blacks” and they had their own vernacular.  We have taken that voice and worked with local artists Johnny Young and David Wallace with the Tapatjatjaka Arts Centre to tell the lesser-known social history of First Nations station workers and their language of the land.’

For the light installation, Angkentye Stockmen Mape-kenhe – The Language of Stockmen, organisers selected original artworks by local artists Johnny Young and David Wallace made from recycled materials – obsolete cooper wire used by Telstra – and collaborated with young artists from Tapatjatjaka Arts Centre to replicate them in oversized sculptures.

‘We have taken their little horses and tiny camels and we have made them into four-metre structures that the community is working on. There are young men who line up each morning to be part of this – the art centre has been blown away – it has really empowered them,’ said Roberts.

The event is held across Alice Springs, or Mparntwe, and will showcase seven extraordinary lighting installations in both Alice Springs Desert Park and the Todd Mall precinct.

Plan your trip to Parrtjima 2019

Roberts told ArtsHub that among the new installations this year was an impressive illuminated tunnel, Angkentye Anpernirrentye-kerte – The Language of Kin, which will welcome guests to the festival space. The installation explores complex systems of kinship and features an accompanying audio soundscapes for a surreal experience.

As a feature of the festival,= is that two kilometres of the incredible MacDonnell Ranges – a 300-million-year-old natural canvas – will be activated by unique light works featuring actor Aaron Pedersen, an Arrernte descendent, delivering a script written by Arrernte people that takes the audience on a stirring journey through Country, the kinship system and language.

Roberts said another highlight of the 2019 festival will be the light installation, Angkentye Arrpenhe – The Language of Change. For Parrtjima, three ‘bush taxis’ have been painted with the stories of 21st century journeys of adaptation, activated by lights and audio.

She explained: ‘We are an ever adapting culture and change has come about in the Central Desert region quite quickly, from walking the old dreaming tracks to using camels, to horses to motor cars, and the challenges we face with that, whether politics, funerals, dialysis, or trauma. For people living on the Territories it’s the bush taxi – a 21-seater bus – that allow those journey lines to be travelled.

‘It is about the politics Aboriginal people face, but it is also about the celebration of our language and our change, and to be so resilient – that is real positive – and it is that type of freshness to the stories that the festival offers,’ Roberts added.

Traditional languages are vital to providing continuance of age-old stories, culture and connection to Country. That is also done through music and public programs at Parrtjima.

Roberts explained: ‘Every night there will be a free language workshop, and we have a festival hub in two precincts – the Desert Park and Todd Mall – where we have developed a public program for people to join weaving and spear-making sessions, or to hear about skin grounds and learn about Kinship’.

There will also be a return of the festival favourite Ahelhe Itethe – Living Sands (Grounded), which will captivate visitors with a new selection of animated artworks showcased on desert sands, accompanied by an atmospheric soundscape.

This year, seven local and Central Australian First Nations artists have contributed works to the installation.

The Language of Children – Angkentye Ampe-kenhe promises family fun with an over-sized maze containing the interactive artwork of Valerie Napurrurla Morris of Warlukurlangu Artists Aboriginal Corporation. It recognises the way children communicate during play as a great connector, leading to belonging, being and becoming.

A further highlight will be a series of sculptured large-scale moths along Todd Mall with designs by independent Arrernte artists. At the request of Arrernte people guiding the festival, these provide another layer to the story of the Arrernte relationship to the physical and spiritual world.

Accompany the dazzling lighting installations as part of the free public festival will be an inspiring mix of musical acts, talks and performances.

‘It is exciting in that there is this voice of young people, and while they are using multi-media and Western instruments they are using language and continuing with the stories,’ Roberts told ArtsHub.

Parrtjima – A Festival of Light will be presented across the Alice Springs Desert Park and the Todd Mall precinct, Northern Territory, from Friday 5 April to Sunday 14 April 2019.