TV Review: ‘You’ S3 on Netflix pivots perfectly to satire

TV's most romantic serial killer struggles with marriage and early parenthood and it's loads of fun to watch.
Anthony Morris 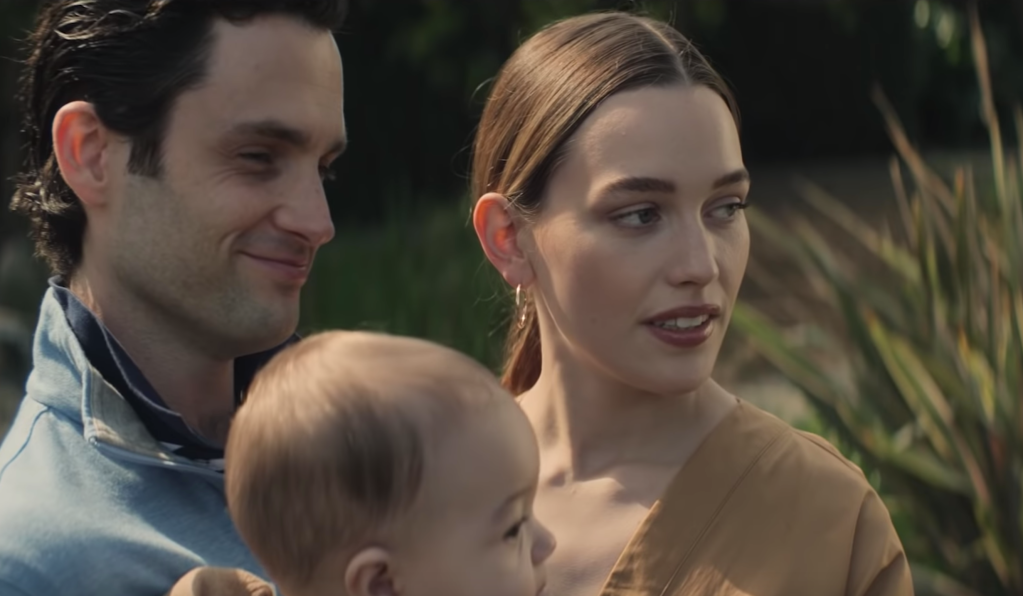 Penn Badgley and Victoria Pedretti in YOU S3. Image via Netflix.

What happens to a romantic when they’re faced with the drudgery of family life? For Joe Goldberg (Penn Badgley), charming bookish nerd, firm believer in love and unrepentant serial killer, it’s a living hell. And for once, he can’t murder his way out of it.

For one, his new wife Love (Victoria Pedretti) knows (literally) where the bodies are buried, and she isn’t above adding another one to the pile. For another, they now have a son to go with their suburban white picket fence lifestyle, and Joe won’t let him go through the childhood abandonment he suffered… even if his wife keeps calling the baby by the name of her dead brother and the infant bursts into tears every time Joe picks him up.

At the end of last year, pseudo-vigilante revenge thriller Promising Young Woman grabbed praise for casting a string of former TV heartthrobs as sex pests not all that different from their iconic TV roles. You got in on the joke years earlier by casting Badgley, AKA generational heartthrob Gossip Girl’s Dan Humphries, as its lethal lead.

Season one showed what seemed like a perfect romance, only Joe’s typical rom-com attentiveness and refusal to be deterred masked his stalker mentality and a willingness to kill. Season Two saw Joe trying to start over, only now the archetypical New Yorker was in LA and loathing every superficial minute of it. Both seasons ruthlessly used a dark streak of humour to dissect the cliches around romance while presenting a chilling look at a superficially charming psychopath obsessed with his fantasy version of ‘love’ no real woman could ever live up to.

The end of season two blew all that up, trapping Joe in the kind of happily ever after that kills romance – or at least, his idea of it, which is basically pop culture’s idea, because the central joke of You is that our society’s romantic cliches are literally psychopathic. Where could a show about the toxic side of romance take things when marriage and children is already the place where those cliches go to die?

Season three picks up a few months after season two, and good news: Joe’s ongoing suburban nightmare turns out to be the perfect excuse for You to pivot to social satire, as his loathing for everything around him spills out in his hilarious – and not entirely inaccurate – narration. It doesn’t take too long for plot threats to entangle him (You is also a thriller, after all), but his brutal distain for married life and the early, exhausting days of parenthood is comedy gold.

Read: TV Review: Frayed S2 has lost none of its edge

While Love is struggling with motherhood, Joe’s trying to be a good (non-murderous) guy. In reality, that means he’s checked out and staring over the fence at his sexy next-door neighbour Natalie (Michaela McManus), already imagining (or is he?) that she’s flirting with him. The wider situation isn’t exactly smooth sailing either. Their neighbourhood is a picture perfect hell of mommy bloggers and social climbers, Love’s hippie mother (Saffron Burrows) is still on the scene, and there’s just enough references to dangling plot threads from last season to leave the door open for Joe’s murderous past to catch up with him.

It’s no surprise that it doesn’t take long for the body count to once again start ticking upwards. Death and suburbia is a potent comedy combination on television whether it’s Desperate Housewives or Santa Clarita Diet, and corpse disposal has always been a great way to build tension. But it’s the balancing act with Joe himself that makes You so much fun to watch. He’s an often despicable character, an unrepentant self-serving creep, and yet sharp writing and a great performance from Badgley make him one of the more entertaining characters on television.