Filmed in lush Byron Bay, this star-stuffed mystery is an acting masterclass. If only it would embrace its weirdness, says Mel Campbell.
Mel Campbell 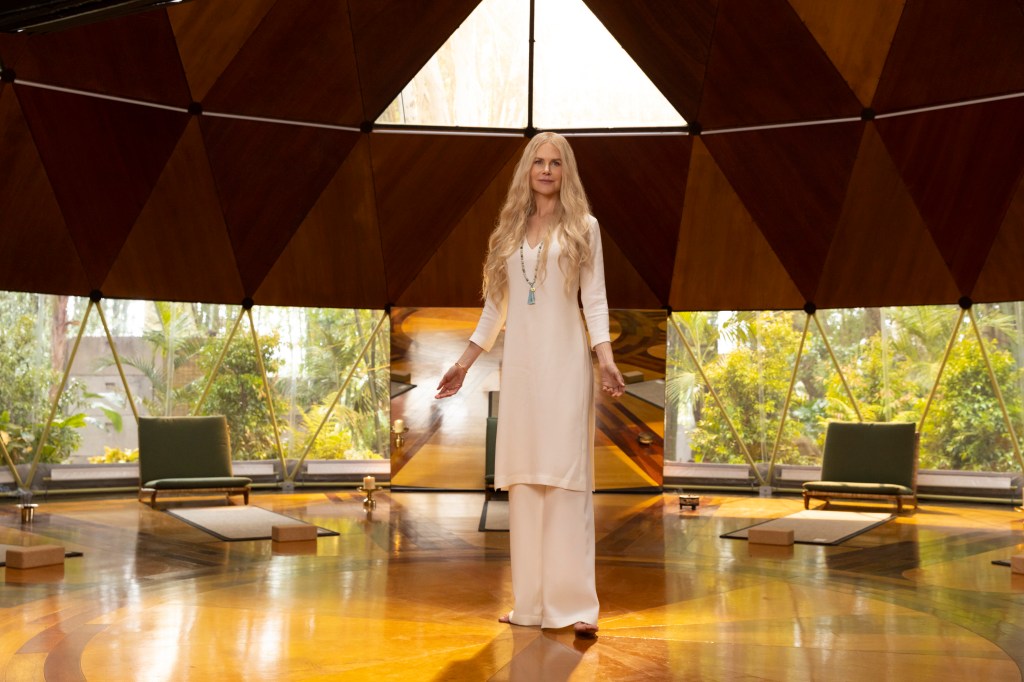 TV miniseries about idyllic resorts for the troubled rich are having something of a moment now, as we languish at home in lockdown. Mike White’s bitingly satirical comedy-drama The White Lotus has just aired its finale episode over on Binge, passing the baton to Nine Perfect Strangers, whose first three episodes premiere on Amazon this week.

Based on Liane Moriarty’s bestselling novel, and lushly filmed in Byron Bay by Australian production company Made Up Stories, with a star-stuffed ensemble cast led by Nicole Kidman, Nine Perfect Strangers comes from the same creative team who adapted Moriarty’s Big Little Lies. And it performs the same trick of transposing an Australian story to a Californian setting. (It is unsettling, however, to hear the character name ‘Carmel’ pronounced US-style as ‘car-MEL’.)

Unlike The White Lotus, this is no class satire. It’s a very earnest, character-driven mystery about the buried traumas and secrets that erupt at the cringily named Tranquillum House, through the unorthodox treatment protocols of enigmatic Russian wellness guru Masha (Kidman).

We learn elliptically, through conversations between Masha and her loyal lieutenants Yao (Manny Jacinto) and Delilah (Tiffany Boone), that Tranquillum has previously attracted lawsuits. Now Masha is receiving anonymous death threats via SMS. Could her stalker be an aggrieved former client, or someone from her pre-guru past, or even one of the nine perfect strangers in her current cohort?

More mystery surrounds what has brought Tranquillum’s latest cohort of guests here. Shaken by the end of an exploitative affair, bestselling romance novelist Frances (Melissa McCarthy) is in crisis as her latest manuscript has just been rejected. She immediately clashes with shaggy, angry Tony (Bobby Cannavale), and with anxious, uptight Heather (Asher Keddie), who’s attending the retreat with her cheerful schoolteacher husband Napoleon (Michael Shannon) and their daughter Zoe (Grave Van Patten), who’s about to turn 21.

Joining them is the aforementioned Carmel (Regina Hall), a divorced mum whose timidity hides a deep wellspring of rage, and Instagram influencer Jessica (Samara Weaving) and her husband Ben (Melvin Gregg), whose marriage is on the rocks. The final guest, Lars (Luke Evans), seems unusually scornful of Tranquillum’s rules and legal waivers, and is overheard saying he’s ‘here for work’. What’s his deal?

The entire pleasure of a show like this is figuring out everyone’s deal. David E Kelley and John Henry Butterworth’s script doles out revelations gradually and deliberately, like a mum on a long car trip handing peeled orange segments to her kids in the back seat. Indeed, director Jonathan Levine (Long Shot, Snatched) and cinematographer Yves Bélanger (Brooklyn, Richard Jewell) dwell on luscious close-ups of tropical fruit being chopped and blended into custom smoothies by Tranquillum staffers Glory (Zoe Terakes) and Lulu (Isabelle Cornish).

Read: TV Review: The Newsreader on ABC is sophisticated and enjoyable

Overhanging the series, in a way that comes to feel fraught and oppressive, is a powerful atmosphere of parent–child care. There are lost children in everyone’s lives: estranged by divorce and drug use; dead by suicide and misadventure. Other characters grieve their missed chance to be parents, or muse on the actions of their own parents.

Kidman plays Masha as a remote, chilly maternal figure. She seems calculatedly aware that she affects her guests most powerfully by withholding her presence from them, then addressing them, one on one, with her full uncanny attention. And she plays Yao and Delilah against each other, showering them both in affection and allowing them to see her vulnerable moments, but also demanding unquestioning loyalty in a way that undermines their romantic partnership.

Over the six episodes I previewed, Masha’s character doesn’t move far beyond a cipher. Preternaturally tall and slender, with porcelain skin, tumbling platinum-blonde locks and an accent that roams eastern Europe, she barely seems human. She’s a Creepy Wellness Guru from Central Casting: drifting through the compound in pale chiffon clothes, her ageless face set in a serene mask.

Much of her backstory remains blurry, even in flashbacks to her pre-Tranquillum life; and I began to feel exasperated by how heavily this series depends on sustaining narrative momentum by dwelling on mystery and withholding key moments that, when they finally arrive, don’t seem huge enough to pay off the ‘powder keg’ premise with which we’ve constantly been teased.

What ultimately annoyed me about Nine Perfect Strangers was its completely serious insistence on emotional catharsis. The performances are all lots of fun to watch, and the talented actors get plenty of opportunities to flex their skills during intense and sympathetic monologues – I particularly enjoyed the sardonic care that builds between Frances and Tony. But there’s something emptily performative about the way the show’s creative approach mirrors Masha’s therapeutic approach without critiquing it.

There’s plenty to ponder about the manipulative wellness industry, but this show seems to revel in its clichés rather than deconstructing them. There are some fun moments when it gets genuinely weird and surreal – I enjoyed the intertextual tang to the cameo appearances by Melissa McCarthy’s mediocre husband Ben Falcone. But mostly, it settles for being bland and tasteful.