The latest Ms Fisher franchise is crafted with care and style to spare. It's got a 60s sleuth you want to hang out with, says Anthony Morris.
Anthony Morris 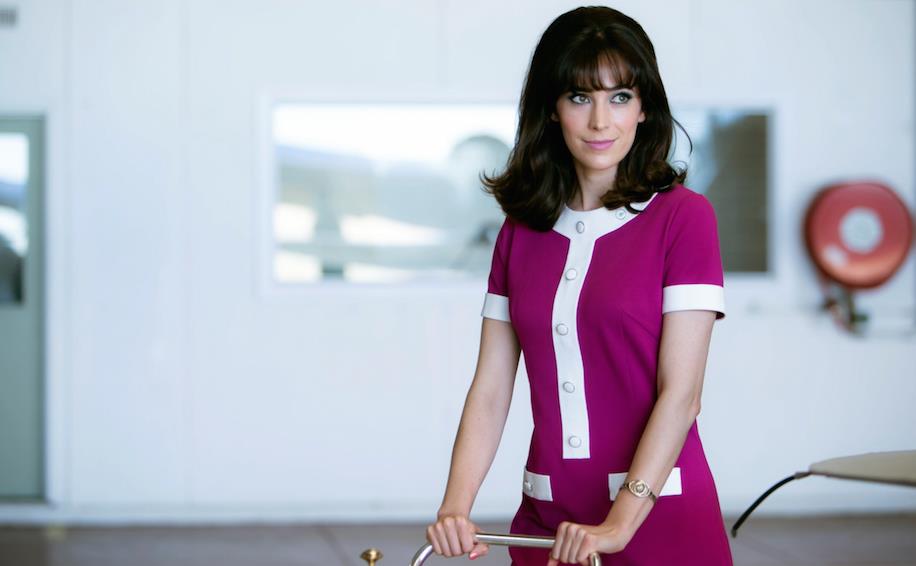 Fans of Melbourne’s 60s-era architecture will find a lot to like in the second season of Ms Fisher’s Modern Murder Mysteries. Occasionally during scene breaks the colourful series will cut to various period footage of notable landmarks – the then-new Southern Cross Hotel, or the Russell Street police complex. The series doesn’t have the CGI budget to recreate these now lost or changed locations, but as is often the way with Australian period drama, it’s the vibe that counts.

We’ve come a long way since the original Miss Fisher’s Murder Mysteries first aired on the ABC in 2012. When that series wrapped (due in part to star Essie Davis’ burgeoning Hollywood career), Seven picked up this spin-off, leaping into the 60s with Geraldine Hakewill as Phryne Fisher’s long-lost niece Peregrine. It was licensed to streaming service Acorn, who then greenlit a second series sans Seven (they’ll be showing it later this year). The change in networks hasn’t affected the finished product: fans of mod murder will find much to enjoy as Peregrine embraces her role as an always fashionable P.I..

This latest instalment in the MFCU (Miss Fisher Cinematic Universe) opens in 1964, and it’s safe to say the sexual revolution is in full swing.

This latest instalment in the MFCU (Miss Fisher Cinematic Universe) opens in 1964, and it’s safe to say the sexual revolution is in full swing. As is the party it starts with, as three couples enjoy fondue, celebrate the award-winning ‘grooviest architect of 1964’, and then pair off – just not with the one they arrived with. It’s all good (not so) clean fun until the next morning, when two of the guests are found dead in the brand new sauna.

Fortunately, one of the deceased was Peregrine’s architect, which means she’s first on the scene and first on the case. The mystery side of Miss Fisher’s various mysteries have always been solid rather than spectacular, and this series continues the tradition of establishing a range of suspects, dropping in a twist or two, then wrapping things up in a satisfyingly plausible fashion that you probably wouldn’t have guessed too far ahead of time. It’s a series with other things on its mind; the mystery is just there to keep the wheels turning.

For example, there is a lot of (implied) sex in this first episode. We first see Peregrine and Detective James Steed (Joel Jackson) tearing each other’s clothes off in the kitchen, and it’s only the arrival of Birdie (Catherine McClements) and her chicken and prawn crackers that prevents them from getting down to business.

Meanwhile, Birdie’s photographer brother Samuel (Toby Trustlove) and his scientist sweetheart Violetta (Louisa Mignone) are also steaming up the sheets out of wedlock, which for a devout Catholic such as Violetta isn’t quite as much fun as it should be. This version of the 60s holds out the offer of freedom and liberation, only for the old ways to constantly rear up, not quite as dead as everyone thought.

For example, the second episode (Acorn is releasing the first two back-to-back) sees Peregrine going undercover to tackle a murder at an air hostess academy. There she’s reminded at every turn that while marriage offers one kind of security, it still shuts women out of large swathes of the supposedly modern world.

As Peregrine, Hakewill successfully maintains the most important part of the Miss Fisher tradition: she’s a lead who’s fun to spend time with.

Those sombre notes are largely kept as undertones. Later episodes see Peregrine investigating a murder at a dog show, a Mods versus Rockers gang war and Samuel hooking a corpse while on a fishing trip. There’s just enough focus on the social turmoil of the 60s to distract viewers from the real point of it all: to keep Peregrine and Steed apart in a will-they-or-won’t-they relationship as old as time.

As Peregrine, Hakewill successfully maintains the most important part of the Miss Fisher tradition: she’s a lead who’s fun to spend time with. Slightly more girlish than her famous aunt, her enthusiasm suits the times well, and Hakewill’s more than capable of selling the moments when true love doesn’t run smooth. Opposite her, Jackson looks good in a sharp 60s suit and handles a slightly tricky role well: he’s an old-fashioned guy in love with a modern gal, firmly retro even as he realises he has to move with the times.

Just as importantly, this series from Every Cloud Productions has style to spare. Every 60s-era car in Melbourne must have been hired out to line the streets, while Peregrine’s commitment to mod fashion is both admirable and stylish (the purple wallpaper, not so much). It’s lightweight entertainment crafted with care. Long may the bodies pile up.