Chronicling a powerful year in the band’s history, this documentary is at its best when it’s capturing their fans’ passion.
Sarah Ward
[This is archived content and may not display in the originally intended format.] 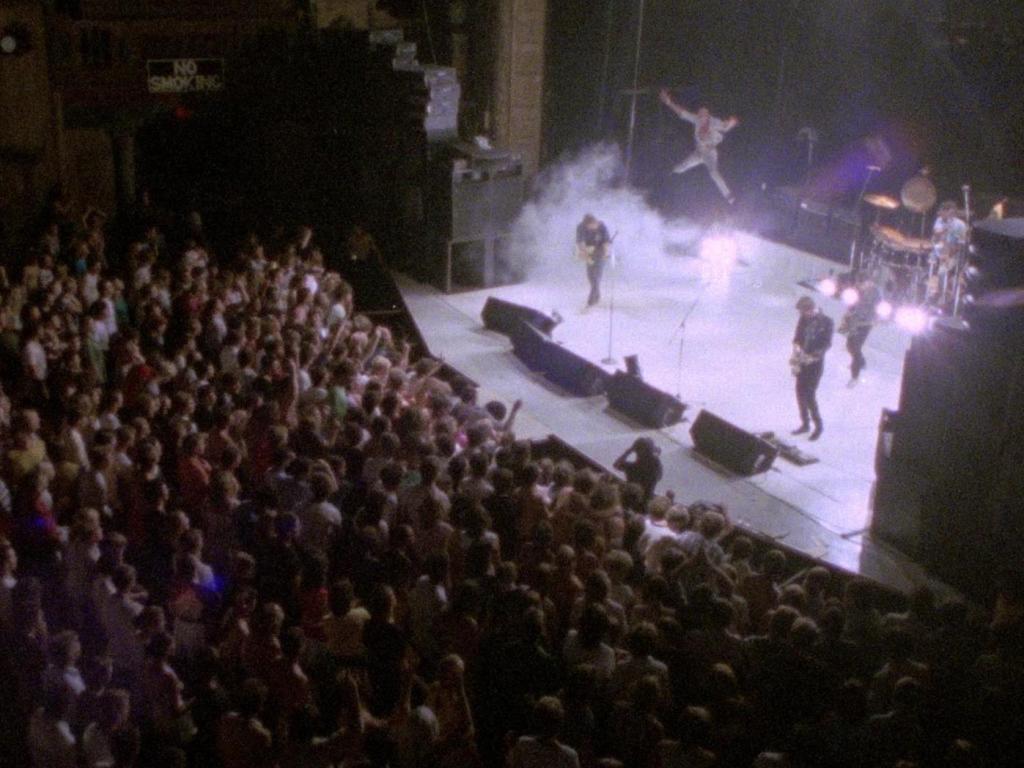 When Midnight Oil sang about power and passion in their 1982 hit, the Australian band could’ve been describing the look on their fans’ faces. It was the record containing the single, 10, 9, 8, 7, 6, 5, 4, 3, 2, 1, that would cement the band’s fame, staying on the local album chart for 171 weeks and spawning a slew of popular songs – but more than any other then, before or since, the track cannily encapsulates the band’s impact. Topical and forceful, it’s a tune that makes a statement and implores listeners to respond, whether they nod along, scream the words or take the politically charged music to heart. As concert footage in Midnight Oil 1984 demonstrates, there’s no such thing as a still, sedate, unaffected gig-goer at the group’s shows. Indeed, the mood during ‘Power and the Passion’ and the band’s other well-known tracks is one of clear fervour and intensity.

Compiled from 28,000 feet of 16-millimetre film shot by Ray Argall 34 years ago – material left stored and unsighted for three decades before the director, cinematographer and editor turned it into this documentary – Midnight Oil 1984 offers an affecting assemblage of power-and-passion moments. A chronicle of the band during the titular year, the feature captures their eventful experiences as lead singer Peter Garrett juggles their touring commitments with a run for the federal senate as a Nuclear Disarmament Party candidate; however it also paints a portrait of an impassioned country reacting to a fiery voice in uncertain times. The energetic shots of crowds at gigs mightn’t be the movie’s main focus, and nor are the expressions worn by teenagers when Garrett visits a Sydney school, but they prove its enduring inclusions. Telling the story of Midnight Oil’s success from the group’s perspective is to relay only half of their tale, with the sweat on their audience’s brows as telling as their own perspiration.

Still, of course, it’s the hardworking band that monopolises the movie. As a retrospective snapshot of just how they secured their position among the country’s music greats and why they’ve enjoyed such lengthy careers – dating back to the ‘70s, disbanding in 2002 then reforming in 2016 – the film covers the requisite bases. Ample, amped-up concert footage from their Red Sails in the Sunset tour illustrates the inimitable live sets that leave fans in their feverish thrall, including those now-iconic dance moves. Candid backstage glimpses peer beneath what’s already a very raw, accessible, down-to-earth veneer. Contemporary interviews provide further context, particularly in documenting Garrett’s first attempted jump from rock activism to professional politics.

With viewers aware of Garrett’s more recent parliamentary endeavours, even if they’re unfamiliar with or can’t remember his 1984 exploits, Midnight Oil 1984‘s real-life narrative only gains potency from the passage of time. It’s not only a picture of the band, their aficionados and their country at its stated juncture, but a comparison between then and now as well. That’s where the documentary’s lingering power finds its foundations, although it’s also where the feature exposes its gaps. Midnight Oil have always had much to say about the state of Australia, messages their music still conveys, and Midnight Oil 1984 shows that the punters wholeheartedly responded – yet pondering how deep the group’s influence ran in shaping audience attitudes long-term falls outside of the film’s remit.

No feature can offer everything to everyone, let alone examine a band with such a rich history and political footprint as Midnight Oil, all in the course of 89 fleetly edited minutes. Perhaps it’s Argall’s efforts to weave in as much as possible that ultimately holds the documentary back rather than thrusts it forward; there are several movies that could be made, from several angles, from his wealth of materials, but the one that eventuates often feels like the obvious overview. Perhaps that’s why the the faces in the crowd hit home the hardest, with nothing remotely simple in their engaged, enthusiastic looks of joy, determination and exhilaration. Watching the band make its presence known through the fans’ rapturous response is to watch a generation confront the problems of the world, on one tour for one year at least.