Tackling every absurdity 2020 has thrown our way from Trump madness to toilet paper bought in a panic, satirical media forces, Chaser Digital and The Shovel, came together for two livestream shows.
Ellen Muller 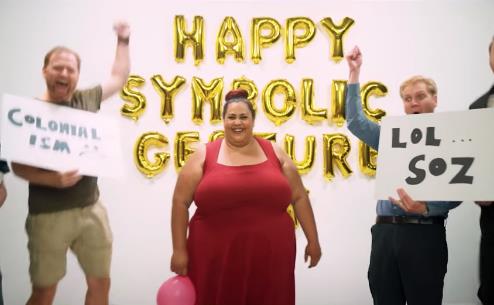 Screen image: Sketch by Steph Tisdell for the War on 2020.

To cap off a year that has aged everybody ten years, and that we’re all tired of talking about, satirical media forces, Chaser Digital and The Shovel, came together for two livestreamed shows (on 11 and 12 December) tackling every absurdity 2020 has thrown our way from Trump madness to toilet paper hoards bought in a panic.

Beginning with a surprise return of ABC’s At The Movies, Margaret and David were back to give 2020 a rating as the ‘b-grade disaster movie’ it was. The pair debated in classic Margaret and David style, whether ‘2020 the film’ is a dark comedy or a metaphor, and through this frame the duo were able to highlight just how stranger than fiction this year was – leaving one wondering whether you’d sit through a movie plot this unbelievable.

Other notable sketches from the hour-long show included: a failed sexy firefighters’ calendar shoot that ultimately becomes a Scomo holiday calendar. There’s a 60 minute interview with a ‘Karen Karens’, a sketch on a ‘no-judgement’ QAnon Anonymous support group, and a tracing of  ‘Dickhead 19’, a phenomenon which seemed to spread concurrently at supermarkets with each COVID wave.

Schloeffel best described War on 2020 as a ‘group therapy session to work out what the f… happened’.

For me however, the most memorable moments were Tisdell’s hilariously depressing campaign for ‘Symbolic Gesture Day’ – where people ‘pretend to give a shit’ about racial inequality through a single social media post.

Also, there was Shar’s imagined dictator conference where a decision is made that ‘Dictator Dan’ is a fair title because everyone was locked inside with their kids (a particularly clever sketch as the Australia-Pakistani comedian has lived under two dictators and does a great job of pointing out how ludicrous that comparison is).

And another memorable moment was an alarming experiment ran earlier in September, by Chaser’s newcomers Aleksa Vulovic and Alex Apollonov, to see how high your temperature needs to be before Star Casino denies you entry (gaining entry as high as 48 degrees!).

In all, while 2020-chaos may understandably be a subject we’d prefer to take our minds off, attending a livestream on a Saturday night and laughing about it seems like a perfect way to wrap up a year nobody expected.

Chaser Digital presents: WAR ON 2020
Online, in partnership with Chaser.com.au and The Shovel
Principal production funding by Screen Australia
11-12 December 2020