Natalie Portman sings Sia's songs in this boldly stylised and intellectually ambitious film about pop music.
Adrian Martin
[This is archived content and may not display in the originally intended format.] 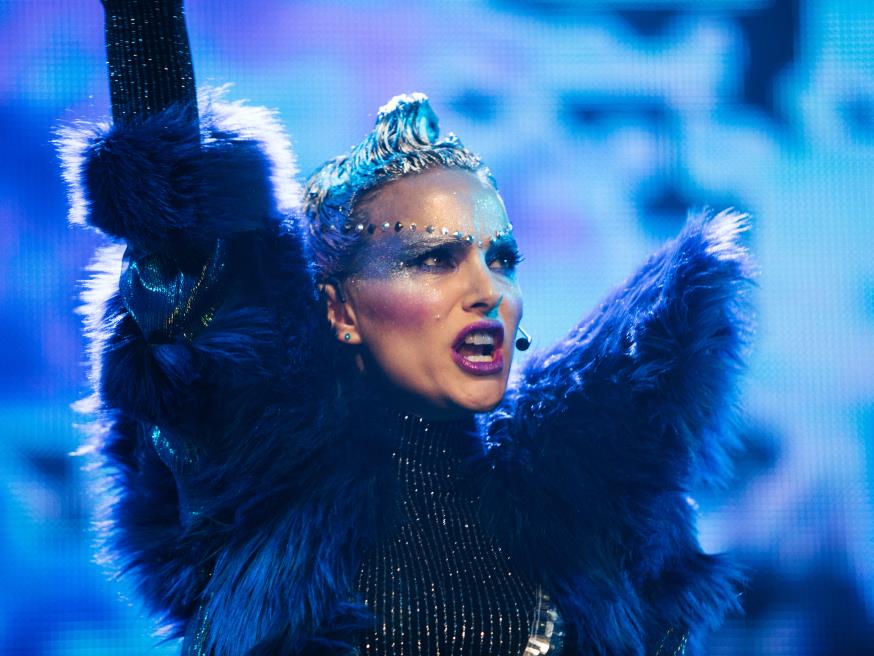 It’s not every week at the movies that you catch a Natalie Portman vehicle which includes voice-over narration from Willem Dafoe evoking Stockholm as “what business scholars and economic geographers call an industry cluster”, or describing its characters as being “somewhat on the losing side of Reaganomics”. Not to mention the lordly encapsulation of its heroine, Celeste, as “rolling off the cultural tongue like a principled anecdote”.

Brady Corbet’s Vox Lux is a boldly stylised and intellectually ambitious film about pop music. Or rather – to quote its own closing titles – it is a “twenty-first century portrait” in which the up-and-down biographies of pop stars, as part of the general celebrity industry, intersect queasily with a cultural ambience marked by school massacres, terrorist attacks, and political leaders who trade on the easy nihilism of “fake news”.

That’s a lot to cram into one story, but Corbet is up for the challenge. First off, he breaks Celeste’s trajectory into two very different halves. The “Prelude” set in 1999 and “Act I: Genesis” cover the first steps to Celeste’s stardom. Incarnated in this half by Raffey Cassidy, Celeste survives trauma (the tragic school shooting), and a humble song written with her sister Ellie (Stacy Martin) and performed at a friend’s funeral swiftly becomes the nation’s “anthem”. The film then skips elliptically through the usual phases of grooming to become a pop star: meetings with agents and managers, recording sessions, the making of a slick video.

Suddenly, Corbet flings us far ahead, into 2017, for Act II of the tale. Celeste (now played by Portman) is 31, and in desperate need of (you guessed it) a little “Regenesis” in her somewhat tattered and sordid career. (The scandalous incident that has undone her uncannily echoes with certain details of Australian-born art critic Robert Hughes’ 1999 road accident in Broome and its aftermath – with both Hughes and Celeste mouthing off about malign media “conspiracies” against them.) This half of the film is not synoptic like the first; instead, it telescopes everything – disastrous press conferences, a tense exchange between Celeste and her teenage daughter Albertine (Cassidy again), behind-the-scenes preparations – into the day of a big comeback performance, culminating (as in the finale of Prince’s Purple Rain movie) with 15 straight minutes of a live show.

Well, fairly straight – except for yet another ghostly insertion of Dafoe reading what is possibly the most “omniscient” narration in cinema history. This is Corbet’s way: the moment we risk getting too “immersed” in the individual characters and their interpersonal dramas, the film yanks us out with that voice-over. This level of Olympian detachment will drive some viewers crazy, but it’s of a piece with everything Vox Lux aspires to do – and mostly succeeds in achieving.

Although the typical phases of a music biopic are employed by Corbet, he is also a dab hand at circumventing or twisting our expectations. When Celeste “releases stress” before the big show by indulging in sex and drugs (with her manager played by Jude Law), we count on her toppling over, messing up or even dying before our eyes on stage – absolutely none of which happens. On another level of proceedings, Cassidy and Portman, so starkly different in every aspect of their performances, hardly seem to be inhabiting the same character named Celeste across the film’s two, distant halves – and that is precisely Corbet’s point: identities are malleable, history has no continuity, all that is solid melts into air.

While steeped in the history of many popular rise-and-fall-and-re-rise movies about pop or rock music – from Bette Midler’s The Rose (1979) to the latest version of A Star is Born (2018) – Vox Lux belongs to a more renegade tradition. Like Peter Watkins’ Privilege (1967), Todd Haynes’ Velvet Goldmine (1998) and the little-known but sensational French production Les Idoles (1968), it takes the whole spectacle of the music industry as a grotesque mirror of broader problems and trends in society – here updated past the leftist ideas of previous generations to include a dizzy sense of “postmodern” confusion and irresolution. Even at its most pointedly ironic, the film seems to share in the frazzled uncertainties of its characters.

Moreover, Corbet belongs to a certain loose “family” of filmmakers who shun the classical ideal of an “invisible” style and, instead, make intensely evident the forms and shapes of their work – with, quite literally at times, the lines of architecture, the movements of camera or actors, and the beats of music cued up together in strict unison. This is not simply for the sake of some show-off virtuosity; rather, the most powerful effects of their films (when they work) derive from this insistence on us recognising their form. The Big Daddy of this hyper-aesthetic clan is unquestionably Stanley Kubrick, with Austria’s Michael Haneke running a close second. But the progeny are quite diverse and far-flung, including Peter Greenaway (UK), Bertrand Bonello (France), Amat Escalante (Mexico) and Corbet.

If one thing unites them all, it’s a fascination with power and control: how people internalise, in their heads and bodies, the regimentation of a social order – whether that order be in the form of an army patrol, or an “arena” pop concert. Not far below the veneer of civilisation, however, there lurks a mass of seething, Dionysian drives (like lust and aggression) that threaten, at every unstable moment, to topple us into an unruly, animal kingdom.

I did not enjoy Corbet’s directorial debut, The Childhood of a Leader (2016), one little bit. I found it – as others may find Vox Lux – arch, pretentious, emotionally distant, rigidly formal, and overstated in the way it spelt out and hammered home its big ideas about history, politics and family life. There were certainly things to admire in it – such as Scott Walker’s thunderous orchestral score (Walker is back for Vox Lux, blending his characteristically disquieting music with the ingenious song repertoire composed for Celeste by Australian star Sia). But there is a sureness of touch – as well as an air of poetic mystery – which Corbet brings to his second film, and it bodes well for his future.

Best of all, there is a beguiling ambivalence attached to almost everything in Vox Lux. In one sense, it’s easy to make a movie that mocks pop music and every lousy thing it can stand for. When Celeste messianically declares herself to be the “new faith” and even a “new New Testament”, we wince alongside those around her; but by the time she’s reached her third triumphant “anthem” on stage, we can’t help but bop along – just like Ellie and Albertine buried deep in the crowd – to the “affirmative”, high-energy vibe. A twenty-first century portrait? I’ll buy that.