Film Review: US finds real darkness in a sprawling mess

Jordan Peele's follow-up to GET OUT is flawed but deeply unnerving.
Anthony Morris
[This is archived content and may not display in the originally intended format.] 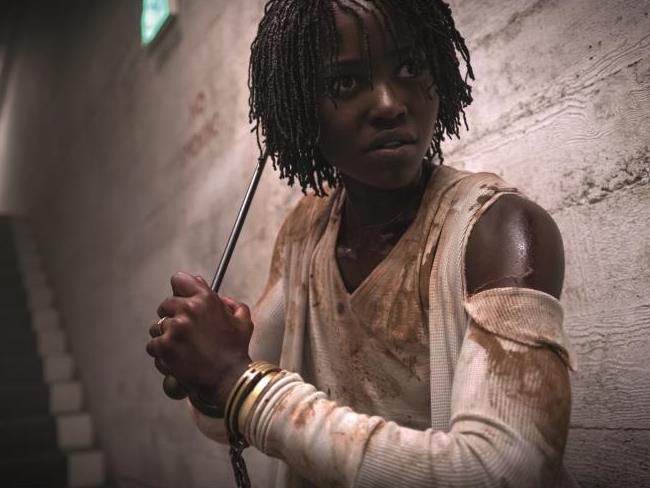 Lupita Nyong’o goes to war with her double in US. Source: UPI.

With horror movies, less is almost always more. Short run times, sharp scares, brief explanations; it’s a formula that’s worked for generations. So with Us running almost two hours long, and with a final act that at times feels like it’s nothing but explanations, you’d be forgiven for thinking that writer-director Jordan Peele decided the rules don’t apply after his smash hit (and Oscar-winning) first film Get Out. But the rules he’s really breaking here are the ones his first film laid out; where that was a tightly focused horror-satire, this is a sprawling, messy film that finds real darkness in the spaces between what it says and what it shows.

In 1986, a young girl (Madison Curry) wanders off from her parents at the Santa Cruz boardwalk and finds herself in an increasingly creepy hall of mirrors where something worse than a reflection awaits. In the present day, a firmly middle-class family are on their way to a Santa Cruz beach house holiday: dad Gabe (Winston Duke), children Zora (Shahadi Wright Joseph) and Jason (Evan Alex), and twitchy mother Adelaide (Lupita Nyong’o), who, it turns out, was the girl on the boardwalk all those years ago.

Being this close to where it all happened has Adelaide firmly on edge, and a trip to the actual beach to spend time with their rich buddies Kitty (Elizabeth Moss) and Josh (Tim Heidecker) doesn’t help her mood any. She’s haunted by the idea that somewhere out there she has a doppelganger out to do her harm. When a mysterious family, all dressed in red, appears at the end of their driveway that night, it’s just the beginning of a very bloody nightmare come true.

Us feels overstuffed rather than overlong, and not all the pieces fit. There are deeply unnerving moments here, but much of the early family holiday scenes feel unfocused, establishing in twenty minutes what we understood in five. Even when this tips over into full-blown horror – it turns out the mysterious family are literally their evil twins tethered to them, shadow selves come up from the depths to kill and replace them – Peele still finds plenty of time for mood-breaking moments of comedy and family banter.

All of which suggest he has more on his mind than straightforward scares: if he wanted to make a terrifying 90-minute film, there’s enough tension here to show he’s clearly capable of that. But where the explanation in Get Out was chilling not because of the science-fiction details, but the all-too-plausible racism and entitlement behind it, here the story behind the premise fails to satisfy. It’s garbled rather than suggestive, raising more questions than it answers.

Peele is a film-maker clearly interested in methods of social control, and the highly controlled nature of his films reflects that. Astute viewers will figure out early that the reason why he doesn’t use some of the more obvious scares to be had with evil twins is because he’s saving them for later; the background is full of pop culture references that pay off in one form or another. But it’s in the moments where Peele seems to be reaching further down for moments and imagery that can’t easily be explained that this becomes truly unsettling.

Who made all the tethered’s red uniforms? The scissors make sense eventually, but why the single driving glove? The tethered’s origin and ultimate scheme might somehow explain too much yet not enough, but the images that come with it are worth the confusion. Us is a fragmented film that suggests Peele is at a crossroads: balanced between the didactic horrors of his first film and a more emotional, uncanny form of storytelling yet to come.