From Shakespeare to a red dress, this Ned Kelly is a wonderful reworking of a grand narrative, if a bit mumbly, according to Chris Boyd.
Chris Boyd 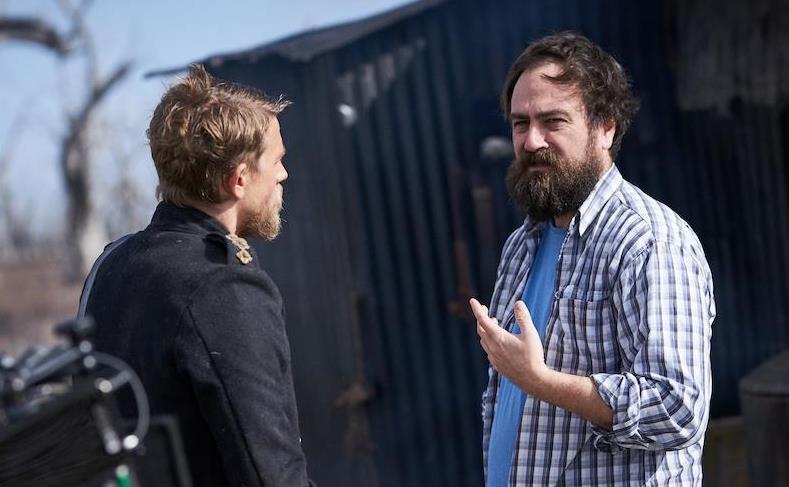 Director Justin Kurzel at work with George Mackay on The True History of the Kelly Gang. Image: Stan

The word ‘punk’ crops up repeatedly in advance publicity for Justin Kurzel’s True History of the Kelly Gang, but ‘fanfic’ might be a more useful signpost for audiences: what to expect and how to read it. Kurzel responds imaginatively to Peter Carey’s characters in much the same way that Carey responded to Sidney Nolan’s iconic paintings, historical accounts and Kelly’s own 8000-word Jerilderie letter.

Teamed up once again with his Snowtown collaborator, writer Shaun Grant, Kurzel deviates quickly and decisively from Carey’s narrative. In the novel, the ‘slander [that] wormed deeper and deeper’ into Ned’s heart – ‘and there grew fat’ – was of his red-bearded father’s alleged cowardice and treachery, not his cross-dressing. In the novel, Sergeant O’Neil persecutes the whole family and repeatedly humiliates Ned too.

In Grant and Kurzel’s version, O’Neil is one of Ellen Kelly’s regular clients – he’s on the receiving end of a gobby in the very first scene, spied on by her boy Ned through a wide slit in the corrugated iron – and when the Sergeant later tells Ned of his old man’s exploits on horseback, in a red dress, it’s a private and faintly paternal moment, though it upsets the boy terribly.

Also dispensed with are references to Ned’s adoration of his father. ‘Up to that point I had been his shadow never losing a chance to be with him,’ Carey’s Ned wrote. And the casting (Orlando Schwerdt as young Ned, Charlie Hunnam as the fair haired O’Neil) invites us to question the boy’s paternity.

No detail is too small to leave unchanged: Maggie Kelly finds the red dress in a metal trunk in the book, Kate Kelly does in the movie.

Rather than annoying us, these random narrative changes free us from all expectations. They liberate us from fact and fiction. Literally anything can happen. So, for example, when Ned – still a boy – puts a cocked pistol to the forehead of his mentor Harry Power (Russell Crowe), we have no idea if he will shoot the hoary old bushranger or not. He’s got reason enough to. Harry has purchased Ned from the widowed Ellen, as an indentured apprentice, for the princely sum of fifteen quid. They’ve already pulled off an armed heist together and Ned’s been forced to shoot a ‘trap’… that’s early 19th century colonial slang for an officer of the law.

By treating historical figures as fictional playthings – or ‘public domain’ characters as they’re wont to be called nowadays – Grant and Kurzel are free to genetically modify one of our grandest narratives. They gene-splice bits of Shakespeare into the Kelly myth, casting Ned as Hamlet and Ellen as Gertrude, making something wholly new and wholly original, something surprising and satisfying. ‘You’re my little man,’ Ellen whispers to him after the old man has come home drunk, without food for the family. ‘You’re to be everything that he isn’t.’

Without the novel’s ‘your father is a coward’ element and the brutal police persecution, Ned’s eventual violence and lawlessness is a stretch dramaturgically. But the passionately fraught connection between mother and son is beyond doubt, especially when Ellen has fistfuls of her eldest boy’s hair and is reading him the riot act.

Essie Davis is magnificent as Ellen right across the emotional spectrum, from transparent pride in her son’s kamikaze loyalty, to fury in the face of the weakness and treachery of the men around her.

After Ned has saved a posh lad from drowning, the boy’s well-spoken mother (Claudia Karvan) visits Ellen and offers to pay for Ned’s place at boarding school as a reward. Ellen is incandescent with Irish rage: ‘I know what you’re trying to do… trying to bleed our culture out like the blackfella before us. Only the Lord shall take my children from me.’

Framed as a series of letters to his unborn daughter, True History shows Ned trying to protect his story for future generations of Kelly. His voice – which is so utterly engrossing in Carey’s novel – is less prominent in the screen adaptation, inevitably, but Kurzel and Grant more than compensate by peopling the movie with scintillating characters. It’s like Deadwood with a twist of Twin Peaks.

There are gobsmacking cameos from Paul Capsis as the screeching madam of a brothel, Jack Charles as a mellifluous-voiced publican and Tilly Lawless, no less, as a honey trap for the Sergeant. The main cast is like the ensemble of a play which has been running for months. The acting is responsive and detailed, it suggests great narrative depths and complexities.

There’s an impressive dynamic range in Kurzel’s direction too. The calm-before-the-storm middle act is leisurely, even daring to look unstructured. We meet the grown-up Ned (George MacKay) and his mate Joe Byrne (Sean Keenan) riding the flat bed of a train together and wrestling over a copy of R. D. Blackmore’s Lorna Doone. ‘We may be two fools together,’ Ned reads to Joe affectionately.

Ned’s on his way home after a long spell in prison. He’s keen to make an honest living, even if that involves bare knuckle fighting in front of the gentry. ‘But a man cannot change the past nor ever outrun his destiny,’ he writes to his daughter. He finds his mother engaged to an American horse rustler George King (Marlon Williams) – a man young enough to be Ned’s twin – and his little brother Dan (Earl Cave) also in the thrall of the stylish American.

Ned is appalled to find Dan and Steve Hart (Louis Hewison) duffing horses at night wearing stolen dresses. They’re not dresses, they’re masks, Hart insists. And Dan explains that they’re ‘sons of Sieve’ and that nothing scares men like ‘crazy’ does.

Ned returns the dresses to the local brothel where he meets a kinky police constable Alexander Fitzpatrick (Nicholas Hoult), who rewards his good deed by offering him a girl, Mary Hearn (Thomasin McKenzie). He also tries to befriend him. Ned is suspicious. People like Alex are always trying to take from people like Ned.

The escalation is sudden, brutal and – it must be said – excessively trippy. (The final shootout is like a weird night-vision video game.) Frank Lipson’s three dimensional sound image allows us to feel the trajectory and impact of every single shot fired, and the restless soundscape and original compositions (Jed Kurzel) are compelling, but the bird song is far clearer than the dialogue.

Even with Irish ancestors, a thorough knowledge of Carey’s book, Kelly’s Jerilderie letter and the Macquarie Dictionary of Australian Slang, I missed more words per minute than a mumbled episode of The Wire. To be honest, you’d be better off waiting for True History to drop on Stan – with subtitles turned on – rather than catching it in a cinema. But do not, under any circumstances, miss it.

A Stan original. In cinemas January 9. Streaming on Stan from January 26. 125 minutes.