Celebrity connections abound but surely more could have been made of Warne’s intelligence and tenacity?
Mel Campbell 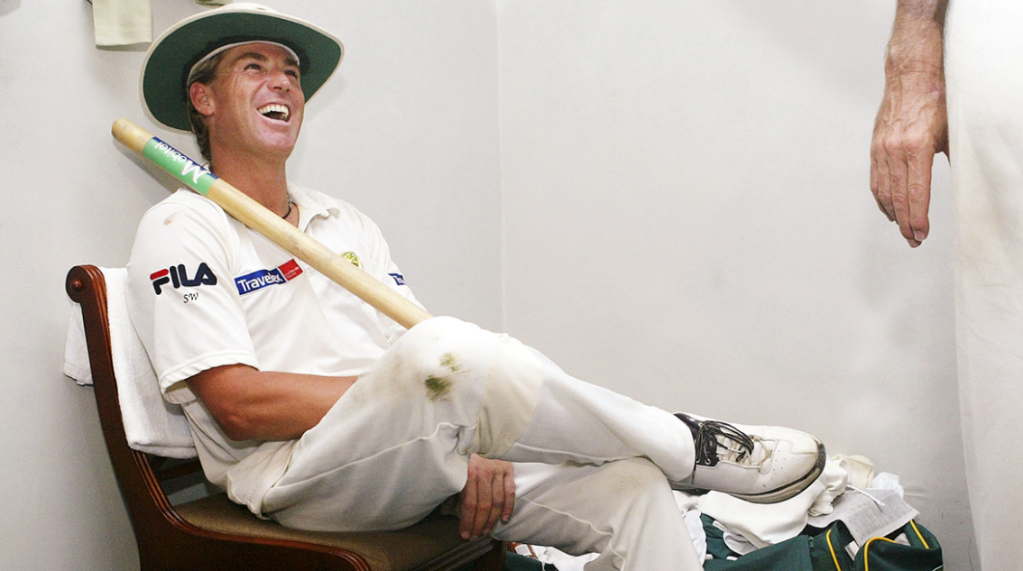 When you think of cricketing great Shane Warne, do you think of the way he made a cricket ball seem to dance around a stunned batsman to smash the wicket? The sledging, baked beans and beers? The match-fixing, bribery and tears when his mum’s diuretic got him banned for a year?

And who’s your favourite Warnie? The roly-poly rookie superstar with peroxide hair like a cockatoo’s crest? Divorced-dad Warnie with a bonce of tousled spikes, spinning through tabloid speculation towards his 700th wicket? Warnie in retirement, shrink-wrapped, hair-transplanted and neon-toothed on the red carpet, a Ken doll on Liz Hurley’s arm, yeah yeah?

Shane is an affectionate documentary portrait which I was surprised to learn Warne himself did not produce. It has a hagiographic feel: Warne himself, now 52, is the primary talking head, along with his retired-cricketer colleagues, friends and family, and also Ray Martin.

Bizarrely, musicians Ed Sheeran and Chris Martin show up too, presumably to flex Warnie’s celebrity clout. Everyone has nice things to say about Warne, even his ex-wife Simone Callaghan and his kids Brooke, Jackson and Summer. Ex-fiancée Liz Hurley does not appear.

A huge part of Warne’s popularity stems from the fact he seems a lot like any fun-loving ordinary Aussie bloke. He’s the personification of ‘yeah nah, I reckon I could do that’. Indeed, in 1989 he spent six months in Bristol playing league cricket six days a week, accumulating valuable skills but arriving home red-faced and 20 kilograms heavier:

‘Every day was ten pints, chicken and chips, and playing cricket,” he says now. He went on to get kicked out of the Australian Cricket Academy in 1990 for mooning someone from the stands.’

Yet he kept on getting opportunities. He’d played just seven first-class matches before his Test debut for Australia. And, by June 1993, when he humiliated English batsman Mike Gatting in what’s been called ‘The Ball of the Century’, Warnie had arrived – and so had his signature bowling style, leg spin. Inspirational stuff.

He became a legendary figure in a sport whose global popularity is second only to soccer – the only one of Wisden’s five greatest cricketers of the century not to have a knighthood. Sir Shane? Everyone here laughs at the idea.

But nearly submerged in this documentary’s affable banter is Warne’s intelligence, focus and tenacity. His style of bowling is a good metaphor for the man himself. A spin bowler ambles whereas a fast bowler sprints; he doesn’t look intimidatingly athletic, yet his technical skill is designed to hide itself from the waiting batsman so as to catch him by surprise.

Some of the most interesting material here focuses on what a leg spinner actually does. Accompanied by the wondrous slow-motion, multi-angled footage that contemporary cricket coverage does so well, Warne explains how he learned to grip the ball, to rotate his shoulder unintuitively inwards to generate force through his hips and knees, and then to flex and flip his wrists – a strength he credits to an early-childhood accident that left him with two broken legs, dragging himself around on a homemade trolley.

Another revealing fact is that the teenage Warne never dreamed of playing cricket; he yearned passionately to be a professional Australian Rules footballer. He got as far as the St Kilda under-19s and reserves, where he idolised and modelled himself on St Kilda star Trevor Barker: a scrappy larrikin with blond teen-idol hair and a surfie tan.

Indeed, even at Warne’s 1990s rise, there was already something a little retro about his showmanship and hedonism. His style felt more akin to the outspoken Ian Chappell or the flamboyant Merv Hughes – both of whom are talking heads here, along with Allan Border, Mark Taylor, and international stars including Sachin Tendulkar and Lord Ian Botham.

But as Warne says: ‘I just wasn’t good enough.’ Delisted and lost, working in random jobs and casting around for purpose, he lighted upon cricket. ‘I became a sponge: I decided to get as good as I possibly could.’

Enter Terry Jenner, a former leg-spinner who’d just done time for embezzlement, and was now a bowling coach. Jenner was a kindred spirit: an unorthodox player who’d made mistakes. And it’s clear Warne was a diligent student who put in serious time in the nets.

At other moments in the documentary, Warne’s shrewd, ruthless side leaps out. He emerges as a strategist who could master his own psyche (he describes himself as ‘tough upstairs’), rally teammates and unsettle opponents. And even he admits cricket came before everything else – including his family: ‘To be as good as I was, I had to be selfish at times – and I was.’

But while later scenes cover Warne’s Ted Lasso era as captain–coach of the Indian Premier League’s Rajasthan Royals (a ragtag team of has-beens and rookies who ended up winning the 2008 premiership), Shane frustratingly retreats to a view of Warne as a guileless everyman. He provides a modest epitaph: ‘I like loud music, I smoked, I drank, and I bowled a bit of leg spin.’

Not only does this poorly serve his tremendous drive, it also soft-pedals his involvement in those notorious match-fixing and bribery incidents. And while the Warne we see onscreen is trim, articulate and clearly much more media-savvy than at his playing heights, the documentary doesn’t really examine his latter-day work as a commentator and brand endorser, except for a montage segment that portrays him as a gee-whiz youngster excited to be courted by sponsors. Even scenes filmed with his family emphasise he’s just a regular bloke and devoted dad.

Perhaps the three co-directors – whose background is in human-interest TV production, particularly in reality TV formats – did not want their audience to ponder the kind of promotional project this film itself is.

It’s a celebration rather than an examination of Warne’s place in Australian culture, made for people who already like Warnie and want to like him more.