A muddled Australian thriller promising female empowerment but inviting a misogynist conclusion.
Mel Campbell
[This is archived content and may not display in the originally intended format.] 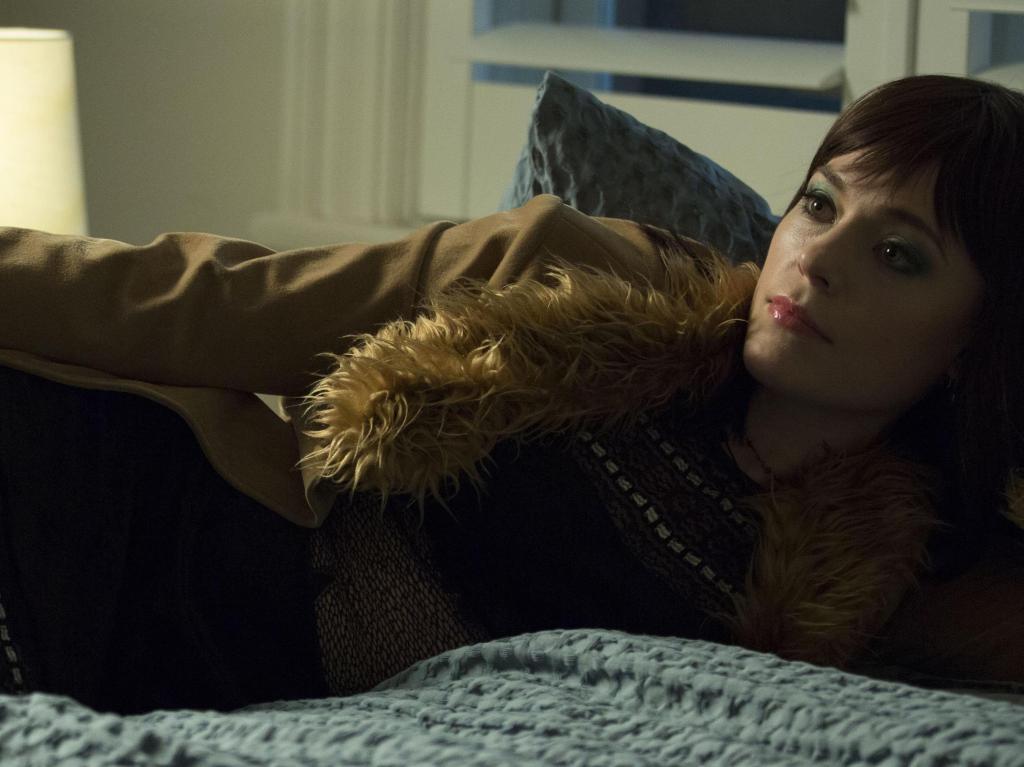 The problems with Australian psychological thriller Pimped begin with its title. In grammatical terms, it tells us we won’t be following an active subject who ‘pimps’ – who controls and exploits women by trading their sexual labour to paying clients. Instead, we’ll be following the passive object of this pimping, who has been controlled and exploited. The title titillates viewers with the prospect of witnessing men’s abuse of women.

It also signals an empathy gap. David Barker directed Pimped in his feature debut, from a script he co-wrote with Lou Mentor. The film promotes itself as a story of female empowerment, but it feels like it’s gazing at a woman from the outside.

The title object, Sarah Montrose (Ella Scott Lynch), is first spotted dozing on the couch with a book in her comfortable suburban home, wearing a cosy jumper and trackies. But she clearly yearns for something more; and the film has chosen to externalise Sarah’s inner conflict by personifying her impetuous, transgressive desires as an alter ego, Rachel (also played by Lynch), who is dressed vampishly for a ’90s club. It’s Rachel who lays out Sarah’s sexy underwear and zips up her slinky black dress. Then they cross Sydney in a cab and hang out in a cocktail bar, seemingly waiting to be approached.

There, handsome, sharp-suited Lewis Blake (Benedict Samuel) seduces Sarah with his nihilistic banter. She’s happy to head back to his glamorous harbourside home. But we know, from the film’s opening party scene, that Lewis is the mere housemate and enabler of Kenneth (Robin Goldsworthy), whose idle debauchery is financed by his wealthy parents, Sophia (Heather Mitchell) and Michael (Lewis Fitz-Gerald).

Kenneth is a familiar, even dull type of menacing man-baby, from the Daniel Henshall and Gyton Grantley school. But Barker does effectively stage the sequence in which Sarah meets Kenneth. It’s the film’s best and most unnerving moment… and it happens about half an hour in. I’m calling Pimped a psychological thriller because it boils down to a battle of wits; but it blunders through the remainder of its run-time, its characters impelled by happenstance rather than agency.

Pimped often feels like a stage play. The cast is small, with only two or three characters interacting at a time, and there’s much more dialogue than action. The key locations are beautifully designed and dramatically lit – but in an empty, false way, like sets rather than lived-in spaces. All this – combined with the imaginary conversations between Sarah and Rachel – gives Pimped an air of unreality.

This could have been intriguing if the film’s ideas were clearer. But they aren’t. The actors strive admirably, but never quite succeed in bringing to life the under-developed script, which clutters the narrative with conflicting possibilities yet lacks insight into the characters.

Is Sarah mentally ill and dissociating? Is she an innocent entrapped by a psychopath? (Samuel, who’s previously known for playing villains, lends Lewis a weaselly creepiness.) Or – and this possibility excited me – is Sarah herself an opportunistic sexual predator who gets off on posing as a helpless victim? Or perhaps it was all just a bad dream…

I got the sense that the story’s vagueness was meant to heighten its tension. But a good plot twist gets its impact from the moment when all other possibilities fall away. Instead, Pimped piles on more uncertainty, including an epilogue that forces a complete re-evaluation of everything we’ve seen, leaving me wondering what the point of it all was.

What makes this film so unsatisfying is the way it sets up ideas that never pay off. It teases the idea of troubling the categories of ‘pimp’ and ‘pimped’ in a feminist way – asking who is using whom, and what is really being bought and sold. And it raises, but never resolves, tantalising undertones of class. Perhaps Kenneth is the pimp: the one with the economic power, who exploits Lewis’s sexuality.

Instead, the film forces its audience to figure out what it means; and this conceptual vacuum even invites a misogynist conclusion: that Sarah’s own foolishness (represented by Rachel) got her in this mess. Mystery and ambiguity can be gripping and exciting onscreen, but as I watched Pimped I mainly felt bored and annoyed.

The film’s website is designed as an interactive wall of user-generated catharsis, dubbed ‘To All the Liars I’ve Loved’. The idea is that you can vent your rage and sadness at former partners by uploading a thoughtful – and non-defamatory – image file. You can also share any tile on Twitter or Facebook… although not Instagram, which is the obvious home for basic homilies.

Perhaps the website producers were inspired by the handcrafted aesthetic of PostSecret, but ‘To All the Liars I’ve Loved’ makes it way too hard for people to participate. People like to share memes, not painstakingly make their own. A project like this needed to encourage spontaneity of the kind found in toilet-stall graffiti, or the sense of community that animates Bye Felipe and Bad Dates of Australia.

As a viral marketing campaign, the concept of “lies and betrayal in the search for a mate” is too loose to engage with the film. Indeed, the website shares the film’s problems: it provides no clear emotional throughline, and it makes audiences do all the work.