Directed by Australians and filmed in Guatemala, this low-key documentary explores the psychology of a nightcrawler driven to photograph the city's violent crimes.
Anthony Morris 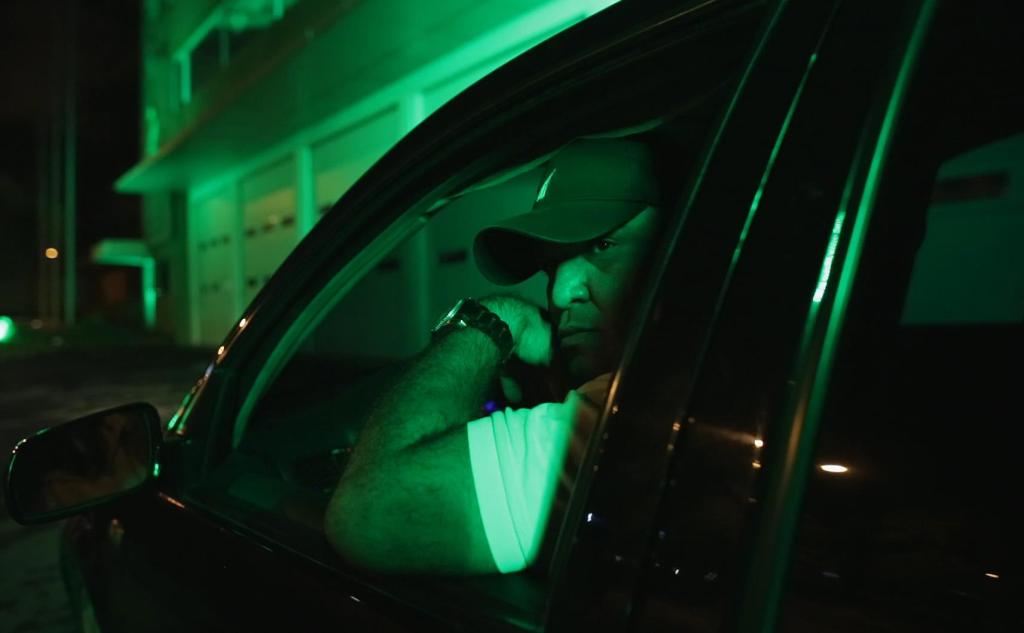 ‘My name is German Cabrera. They call me The Meddler.’

By night Cabrera prowls the streets of Guatemala City, video camera in hand, recording the violence he sees every night in a city with 2100 recorded homicides a year. He works unpaid; his reward is seeing his footage on the nightly news, recording a side of the city that most people would like to pretend doesn’t exist. It’s lonely, dangerous work – his mentor was murdered in his car – but he’s compelled to go out again and again, risking his life getting up close to what seems like an endless series of brutal slayings.

Directed by Australians Alex Roberts and Daniel Leclair, this documentary thrums from the outset with a tension that never quite resolves. There’s an initial romance to the director-shot footage of Cabrera prowling the sodium-lit streets of Guatemala at night (who doesn’t love driving at night?) that’s counter-balanced by the gritty video footage he’s shooting. While El Metido is rarely lurid, this definitely doesn’t shy away from the fact he’s filming bodies in the street – though it’s his interactions with the living that are often most unsettling.

Cabrera’s self-projected image as a warrior of the night is never directly questioned, but we’re given plenty of room to let doubts creep in. He’s a proud father of four boys, though his wife clearly isn’t happy about his mission; as the documentary skips ahead months at a time, she rapidly fades from the picture. His status with the police is sketchy at best. It’s evident that a man driving around at night filming gang violence with the stated aim of publicising it and whipping up public outrage is probably not going to be making a lot of friends in the gang (or law enforcement) community.

There’s no external commentary here, as the team let Cabrera tell his own story with the occasional news report for background. Eventually his fame grows to the point where he gets his own nightly segment on T13 News, where footage of angry drunks and violent nightcrawlers brings in the viewers and a limited amount of fame… which like everything else about his job, doesn’t seem like the best thing for his personal safety. And yet, he can’t stop. As he says himself, he’s addicted.

It seems obvious that Cabrera has, if not a death wish, then a desire to do good that’s self-destructive

A family issue later on with Cabrera’s father – who he earlier described as ‘a violent man’ – promises a little more insight into the forces that shaped him. But again, the tensions the situation stirs up (his father is accused of sexual assault in neighbouring Nicaragua; Cabrera swoops in to save him, only to find journalists aren’t popular) are left largely unresolved. Which is perhaps as it should be; Cabrera isn’t one for introspection, often shown dispassionately viewing heart-rending footage of grieving parents and relatives howling over fresh corpses.

It’s hard not to feel this documentary is leading towards a grim ending, even as Cabrera’s voice over lets us know he survived the filming. There’s a clear three-act structure to El Metido, as the final sequences from 2016 show him actively working with the police (‘It reached a point where I had to do more’) to infiltrate and take down a gang that’s been intimidating and murdering the city’s bus drivers. It seems obvious that Cabrera has, if not a death wish, then a desire to do good that’s self-destructive (with some voyeurism mixed in), even as he works hard to bring his boys up right.

Impressive camerawork by Darren Hauck, gripping subject matter and a compelling central figure are what drives this low-key but at times powerful documentary. There’s no wider insight into either the problems of Guatemala City or Cabrera’s psyche, but when you’ve got a character willing to go undercover to talk to crime bosses – when not even a year ago he was a media celebrity repeatedly recognised by people on the street – you don’t really need them.