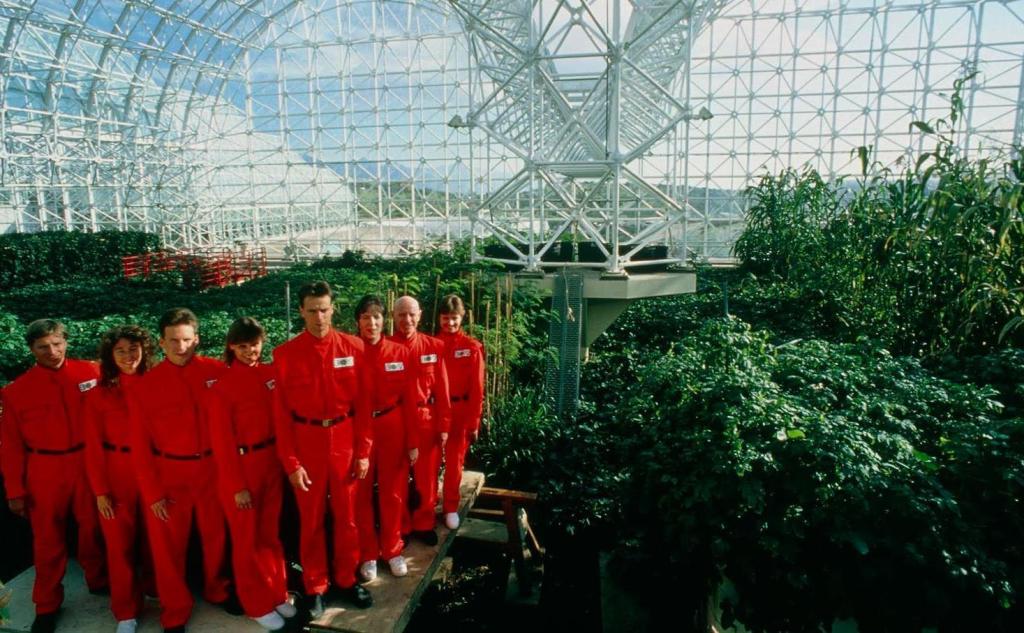 This doco explores the history and events around the Biosphere 2 project, which saw 8 people (four men and four women) lock themselves away in a simulated replica of Earth’s ecosystem (really ecosystems, as a variety of environments were created including a rainforest, ocean and a desert), a supposedly wholly sustainable ecological bubble in a geodesic dome in the Arizona desert, in 1991.

The project, designed to test the viability of creating an environment capable of sustaining life on another planet, ­­­attracted huge attention at the time but along the way public support turned and media coverage became increasingly cynical. TV presenters and journalists started calling the project the brainchild of a cult, and by the time management turned on itself and conflict within the Biosphere had taken hold, the whole thing was relegated to being seen as a failure.

An amusing voiceover from one TV segment about the ‘diversity’ of the Bisopherians – who were all white and able bodied – is a telling sign of a time when diverse meant non-native English speaker.

After opening with the event of the Biospherians entering Bio 2 and introducing us to the Biospherians still living and who were willing to speak on camera, the film goes back in time to tell of the origins of the project.  Because the Biospherians themselves meticulously documented their lives in film while quarantined, and their founders, the Synergists, had also filmed themselves and their projects over decades, Woolf had hundreds of hours of film footage to draw upon.

Biosphere 2 had its origins with the group calling themselves Synergists, innovators, creators, adventurers and visionaries pulled together by one character called John Allen, whose name inevitably comes attached to the word ‘charismatic’, at the height of the counterculture movement of the late 60s in San Fransisco, influenced by many innovative writers and thinkers of the time including William Burroughs and Buckminster Fuller.

The group worked on many huge projects before Bio2, including running a self-sustaining ranch and building an ocean-going vessel from scratch, as well as founding and performing the Theatre of All Possibilities.  The financial backing came from the son of a Texan oil baron, Ed Bass. They travelled and set up enterprises all over the world, including a seed propagating/production ranch established in 1978, Birdwood Downs in the Kimberley area of Western Australia.

Public conversation had turned to the possibility of life on Mars and so the idea to create a closed system of plants animals and atmosphere, ‘a biosphere that would work,’ to learn how to sustain life was born under the umbrella of Space Biosphere Adventures.

The doco reveals the sheer hard work involved in running Bio2 – there are many scenes of the inhabitants slogging away in the gardens and you get a feel for the relentless demands on the participants. Eventually they begin to run out of oxygen, which naturally has a dramatic impact on everyone’s energy, mood and general health.

Things started to go bad, both within and outside Bio 2. Spaceship Earth, however, shies away from an intense focus on the individuals, rather it seeks to show how expansive the group’s overall vision and achievements were; the story of this remarkable project having been long overshadowed by public scrutiny of personality. Many of the original Synergists, elderly now, still live and work together on their property in New Mexico.

Nearly 30 years on, the project resonates in ways both poignant and urgent – the ecological imperative has reached a critical status, and many people in the world have now felt what it is like to be quarantined.