Entering the Netflix maze from Australia

Slowly Netflix is revealing itself to the sector. The contingent to Screen Forever carried the brand high and attracted a lot of attention.
David Tiley 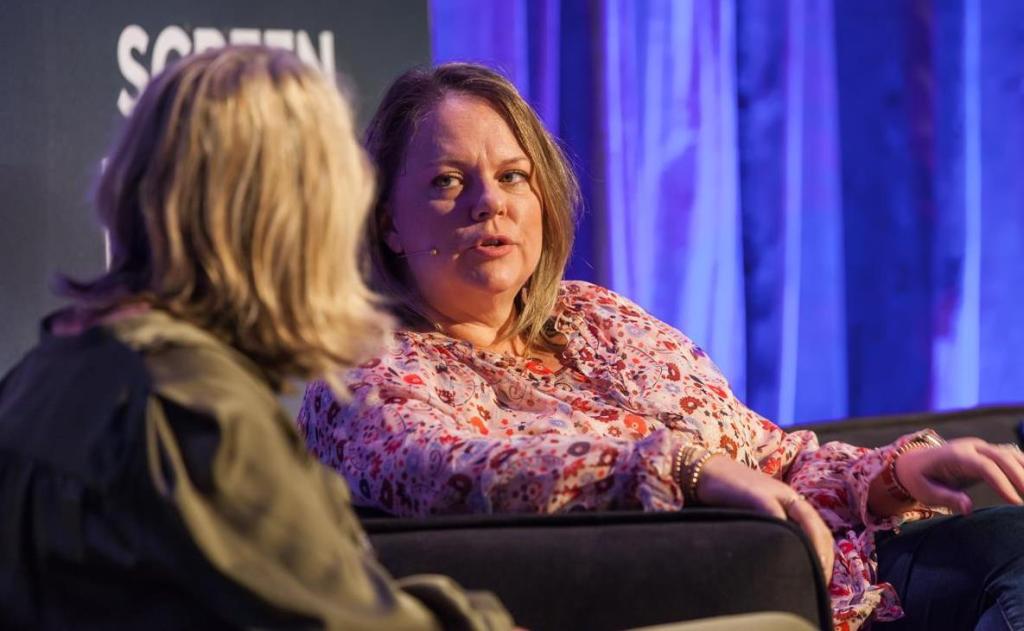 Lisa Hamilton-Daly, the Director of Original Series (Drama) for Netflix, opens up to Jennifer Collins at Screen Forever – within strict limits. Image: SPA.

Netflix is code for Unicorns from the Centre of the World in some parts of the international screen sector. So their team was the subject of intense scrutiny at Screen Forever 2019.

Lead hope wrangler was Lisa Hamilton-Daly, the Director of Original Series (Drama), a former literary agent honed by DreamWorks and A+E Networks into a formidable expert. Her questioner, Jennifer Collins, Fremantle Australia’s Director of Content, knows her territory too, so they conducted a solid industry conversation, within the considerable limits of secrecy.

To get into streaming, Netflix devised a lean, mean system which empowered its commissioning team to minimise engagement with producers, who they figured could be trusted because scale. It was a model based on securing all rights in simple deals infused with the US vision of drama.

That fell apart fairly fast and Hamilton-Daly spoke about the new complexities of the system. I have edited her statements ruthlessly, but kept strongly to their sense.

Compared to other companies, she mused, ’We tend to be much flatter, we tend to have a lot of freedom in terms of what we can do as individual executives. We really do trust our creators and our job is to kind of nurture their vision. There is no set view for what a show is like.’

The Australian Netflix office is essentially about regulatory issues. But Netflix wants to increase their dialogue with this region, and are working to find the most efficient system. At the moment their creative staff is in the US and UK, so our first contacts are with the key decision makers overseas. Hamilton-Daly is responsible for the English language territories so we compete directly with the US, Canada, the UK and New Zealand.

‘An Australian company without an international partner should email the creative executives directly, because we are here to basically help facilitate them,’ she said. Each key person will have a different way of working, from engaging with new ideas to fully worked-out projects. From your first touchpoint the commissioning staff will forward projects to the relevant genre areas.

With her drama hat on, Hamilton-Daly wants ‘fully based scripts that have a producer attached, and that come to us through the producer. Be bold with your idea and have it in the strongest creative shape as possible right from the get go. That really catches our eye.’

‘We will look at treatments, but it’s harder from a treatment to gauge the tone of voice. In drama you want to really understand what that writer’s voice is going to be. Outlines are so tough because it’s just such an artificial format. I really like a script, because I can feel that I can really feel the show that way.’

They are not in the business of development and expect us to access local support. They don’t want to muck around building deals or attaching people. It is an efficient system with regular meetings, and they claim to read everything. It looks fast and dirty – she takes projects basically because they pop for her, though she obviously has wide tastes.

Within those clear affinities, they do have to deal with the complexity of the television funding world. ‘We’re definitely talking to people about original shows and then if it might be better served to be a partnership with a local channel, we’re suggesting you talk to a partner.’

It may be a positive advantage to have the first run in Australia; this comes partly from Netflix’s discovery that localism rules.

‘What people really respond to in shows is the local, is some level of cultural specificity and realness in a project. It’s great when you have it told through the lens of very specific details – what really makes something travel is the truth. Combining those true small details with a really big compelling story which feels fresh and imaginative, that is really the key. A homogenised story is not what we want.’

‘…what really makes something travel is the truth. Combining those true small details with a really big compelling story which feels fresh and imaginative, that is really the key. A homogenised story is not what we want.’

In the search for new and fresh, rom-coms are a good example. ‘It’s a genre which people are not really finding in features and they are family friendly. We’re looking for more of those but with different tellings, as you don’t want to make 10 of the exact same one. So it’s great to find shows that are culturally different from each other.’

They are looking for story-worlds which continue from series to series. ‘It’s like, “What’s that world?”, and “How can we be in that character’s mind?”, so we are thinking forward to sustain future series.’

The discussion about budgets is central for Australian producers looking for ways of funding shows made with a modest infrastructure.

Netflix budgets vary a lot. While the biggest sci-fi or star-driven projects may run to US$10 million per episode, they support many projects which are relatively cheap.

‘We’re really looking to have a mix of programming. We want a solid base of shows at slightly more modest budget levels to provide a lot of content, and then look for those big marquee projects. We want every penny of the production costs to be on the screen, but budget levels have very little correlation to audience size. Some of the most fun shows are cheap and cheerful.

‘If it’s a full original, if we made it from the ground up from our own studio, we have all world rights and own it forever. Then you’re putting on actors’ residuals and everything on top of that.

‘If we are licensing stuff, the windows are all over the place. We could have a really flexible set of deals.’

How many a year?

The key question from Jennifer Collins was: How many Netflix Originals can we expect to make here in a year?

‘Realistically,’ said Hamilton-Daly, ‘It’s probably one or two at the top, just because we have a certain amount of slots. But with co-productions you have a lot more leeway. It is not  a flood of stuff but I am really curating your projects and thinking about what fits best for the slate.’

‘But I would never say never anything. We’re looking for so many different kinds of shows that I think we’re always willing to take a look at something. We all different genres so we keep that pipeline open so we can find the best in class.’

Time is also a key to the underlying logic of Netflix. ‘Our main goal is to get the content that our subscribers paid for to them as quickly as possible. Our members support the content and we feel like it should get to them in a very timely manner.’ That is why, according to Lisa Hamilton-Daly, Netflix has been unwilling to release features into the cinemas first. Subscribers are left feeling that they have to wait and that the version they see is somehow second rate.

Jennifer Collins asked her if Netflix is looking to release more of their internal figures, which are now one of the great mysteries of Unicorn-land.

‘I think the trend is towards a little more transparency,’ replied Hamilton-Daly. ‘I think we released some numbers recently. The numbers are very, very large.’