Lynette Wallworth delivers a pungent speech confronting the Davos World Economic Forum with our experience of a land on fire.
David Tiley 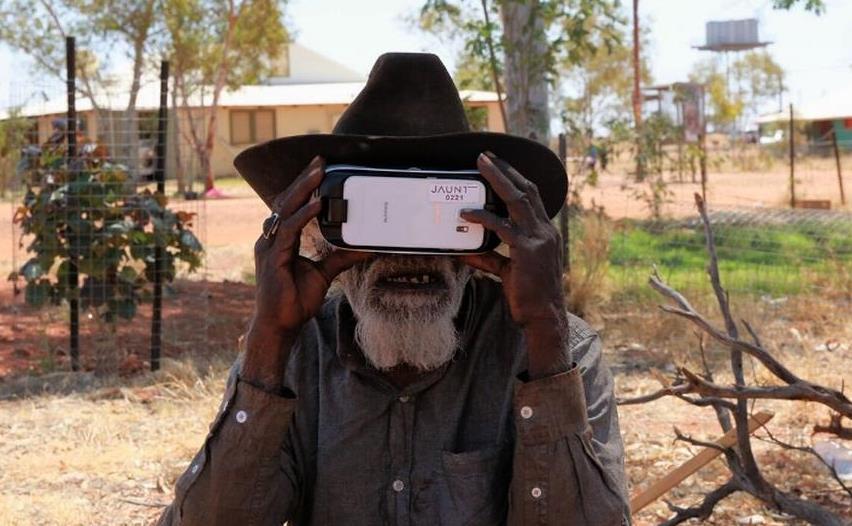 Lynette Wallworth is a force of nature, an experimental screen creator with a delicate feel for emerging forms of communication. She is a true Australian internationalist.

Her work is always accessible and driven by the poetic necessity to embrace the vast processes of planetary transformation, life and death, and climate change.

This year, the World Economic Forum at Davos gave her a platform on the occasion of a Crystal Award for Global Cultural Leadership. She exploded with an extraordinary speech.

Here is the text, composed as a kind of poem:

To write this acceptance speech I woke at 4:30 am, before first light when the air feels clearer and cooler and I couldn’t  see the wrong coloured sky, the strange red/grey or smoke filled white. When it’s easier to breathe in my heartbroken country. I woke thinking about leadership knowing I would be standing in front of you here accepting this beautiful award.

I have been coming here for half a decade now,  at first in amazement that my works of art were embraced and held and listened to, and some of them indeed have been, powerfully embraced by you.
I brought virtual realities and held them up for contemplation and tonight I bring another…it is not an artwork.
I am standing here a traveller from a new reality, a burning Australia where amidst the endless falling ash the thing that is clearest to see, is that what was feared and what was warned, is no longer in our future, a topic for debate. It is here.  We have seen the unfolding wings of climate change and to face what this new reality brings we need leaders to match this moment.

To lead is to guide, to have a vision for the way ahead.
That is impossible if you deny where we are heading.

We need new leaders because in so many places we have elected faithful followers of the past, persisting in marriages to industries in their death throes, holding up the dreams of dinosaurs, whose day is done.

This is a time for new leaders,
for youth leaders
for women leaders
and indigenous leaders
and for those who can work with them because this world has already changed.  It is unutterably altered and that momentous shift will continue,
to what degree, literally, we don’t yet know….
But we do know that those who led us here aligned themselves with corporations over community, with privilege and power over shared humanity and with ledgers over values.
There is an extinction going on, it is the death of a worn out way that no longer serves.
As powerful as their last rampant thrashing will appear, the dinosaur industries will die.
They are dying now.
They will go because we are human and at our core, we want to live.

From my homeland on the frontline of this change what is clear, is that the earth is driving this now.
It is that simple.
We will want to survive this mechanism we have set in motion.
We want to survive it along with the creatures we love whose uncomprehending pain is seared now into the heart of my homeland.

So despite my Prime Minister’s appreciation of coal, it is a fossil he is holding and we have a future to create.

For that we need not just new leaders but thinkers and visionaries, we need radical imagination, we need technologists and dreamers who can illuminate the way ahead.
Some of those who are ready for this moment have already shifted into power and are here in this room.
Some are close by.
Others are allies who have always been here, just to the side, seldom at the table.
So in these next days let us make space for them because we are going to need them to help shape this new reality.

I want to leave you with the last lines from Collisions which the Forum commissioned and I presented to you here in 2016.

(With thanks to Lynette Walworth for the opportunity to publish this)

‘We know what Davos means, we know the industries that are here,’ said Wallworth on the phone a day later. ‘They know they must try for some kind of change.

‘The cultural program has really grown in the five years I have been coming, and it now really permeates the event. If you speak in the language of analogy and metaphor they can picture it and take it on. We craft a narrative that holds concepts inside of it, and it cuts through here where there is so much discussion and debate.’

Wallworth uses the skills of an art-based practice to work in screen media, using gallery spaces, exhibitions, planetariums and virtual reality, fuelled by patronage, residencies, grants and fellowships, marked by a huge array of international awards. Always her work is transparent, surprising but accessible, exploring profound feelings in new ways.

Supported early by the Adelaide Film Festival and an AFTRS residency, she has been exhibiting in the Sundance Film Festival’s New Frontier since 2009, and by 2015 had become a regular participant at the World Economic Forum in Davos, in an extraordinary arts sidebar designed to confront the traditional business decisionmakers with human ways of experiencing the world.

Davos commissioned Collisions, her VR piece about Maralinga in 2016 which was supported by Sundance’s New Frontier’s inaugural Virtual Reality residency.

Carol Becker, the Dean of Columbia University School of the Arts helped to develop the Davos arts program. She wrote an excellent history of the project, which contains her account of Collisions.