Free diving, performative eating, vagina power and the horrors of internet stardom—all the winners at the virtual edition of the Sydney Film Festival are touched by the social web.
David Tiley 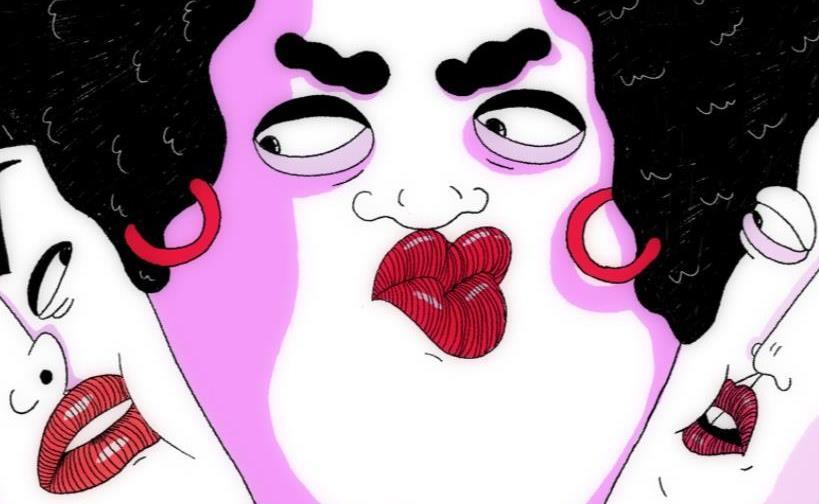 GNT, from the SFF catalog.

The Sydney Film Festival’s Awards Ceremony last night had the key essential, which was awards for some excellent films. But it lacked all that tension vibrating around a real auditorium as clusters of people hope desperately for a moment of honour after months of work. Or years in the case of documentary.

George Miller did the intro and outro on the stream, shot from above in a formal black suit which highlighted his silver hair and urbane manners. The filmmakers were fully composed by the time they had set up their home streaming systems, so they had even more elaborate lists of thankees.

In this context Baghai has the same tamed cool look of a Sydney production dude waiting for a client, which serves him well because he is really an excellent underwater cinematographer, with wider skills as well. For the moment, he is focused on swimming calmly, checking his gauges and bottles, the camera and lights, the framing and movement, the behaviour and safety of his subject, and the story. At times, he has no tanks and is simply holding his breath. Besotted with marine biology as a child, he started the AFTRS bachelor course at the age of eighteen (as you do) and discovered underwater cinematography.

He is a son of Mehrdad and Roya Baghai, entrepreneurs raised in the Bahai faith who started the High Resolves program in 2005 to support children to be their best.

The best way to get a feel for this film is through a remarkable clip on his Vimeo page.

The festival is publishing judges’ comments on the films, which is always helpful. Producer Sally Neighbour and directors Lauren Greenfield and Kriv Stenders combined to say this:

‘As a jury we all agreed that Descent was not only a visually stunning and beautifully crafted film, but that it was also an extraordinary story about overcoming trauma and finding healing and strength at the edges of human endurance.

‘We felt that Kiki Bosch’s story and her free-diving journey through the world’s coldest lakes and oceans is a thrilling and inspiring adventure that ultimately encourages all of us to harness the power within ourselves.’

You can buy either a package or a ticket to individual screenings from the Sydney Film Festival until June 21, although tickets are limited. The documentaries in particular may be hard to find again, because they are designed for cinema release. The interview with Baghai after the screening is a notable hoot.

The Dendy Live Action Short Award went to Alex Wu for Idol. The film is remarkable, a single close up lasting nearly 17 minutes, in which a young Chinese singer and internet star comes to pieces.

According to judges Sophie Hyde, George Miller and Bryan Brown,

‘In a very minimalist way, Alex Wu’s Idol reveals an unexpected story and we were surprisingly moved by the plight of the central character. The use of a single contained shot balanced by the strength of the writing and performance of both actors created a striking film.’

An encounter between these three remarkable individuals and collective leaders would be a hoot; unfortunately the entire event would have played out online without the intimacy of bad donuts and coffee in person.

The Rouben Mamoulian Award for Best Director went to Eliza Scanlen, already an actor with a rising career, through Home and Away to Australian feature Babyteeth, Sharp Objects for HBO and Greta Gerwig’s version of Little Women. There are lovely precise performances in Mukbang which help a lot to find what the judges call a unique perspective and a fresh voice.

Sara Hirner and Rosemary Vasquez-Brown are artistic besties who made the animation GNT as a graduation project from University of Technology Sydney. It is a fabulous piece of post-baroque scatology which makes everything else look as respectable as it really is. Yoram Gross, whose name is honoured by the animation prize which the film received, would probably be really really jealous of the freedom and zest with which this duo can flourish.

I Want to Make a Film About Women, by writer, academic, director and editor Karen Pearlman, was highly commended. It is described as ‘A speculative documentary about Russian constructivist women: Esfir Shub, Lilya Brik and Varvara Stepanova Russian, produced by the Physical TV Company.