A small documentary festival in Castlemaine, pioneers in WA Rev it up, and six strangers on Zoom across Australia launch different ways of engaging audiences.
David Tiley 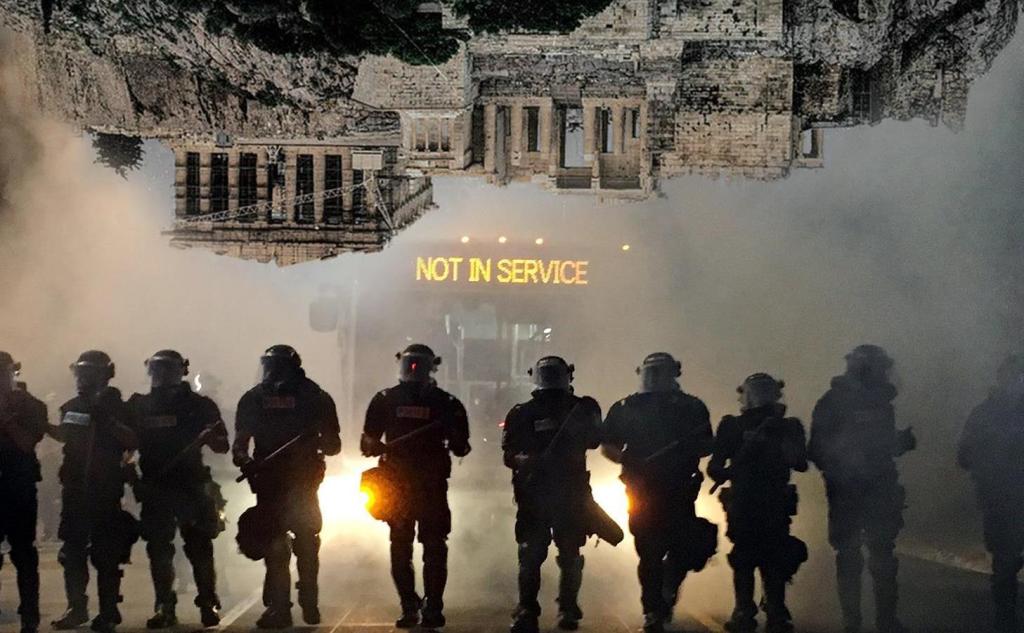 What is Democracy, from a review on The New Inquiry.

Everyone caught up in COVID-19 is hiding from an invisible threat in which the physical world looks exactly the same, and the fear lives in our imaginations. In the performing and screen arts, our audiences have disappeared. Those for whom we act have been spirited away, turned into phantoms.

Where are they? Where is the point of view from which we are viewed? As digital and virtual reality artist Michael Beets reflects, ‘When you create these things, you’ve got to decide on what point of view you want your audience to have. How can I fit live performance into a virtual world?’

The whole film festival movement is based on the live audience, a set of relationships In which crowds and creators understand they have a ritual role. As they go online they serve an audience of prisoners, strangers to each other, unmoored from reality.

So far we have seen valiant attempts to turn the festival into an on-demand streaming service, taking advantage of national reach. But smaller events don’t have that luxury. The Castlemaine Documentary Festival is an extended weekend event in the historic Theatre Royal which is like a gin palace designed by boot-scooters. It is a community festival.

When community drives a film festival

From the screen sector It is run by the formidable duo of Claire Jager and Scottie Charalambous with Jeni McMahon on the board, all  producers with documentary and agency experience working on a mix of faith and caution. Would COVID still be a problem in July? Should they shut completely? Just keep going?

The problem, according to Jager, is that their festival curates conversations in which the discussion is very important. It’s not a thematic conference, but it is participatory. So they will open the venue to sell forty tickets, assuming that is possible in country Victoria at the time, and also stream the films and the panel discussions. Unlike many other festivals, audiences will have to tune in at a specific time.

As she explains, ‘It’s switched around how we approach things and the kind of films that we choose. We are going for appointment viewing where we want to connect with our audiences who are all going to be watching at the same time, and then stick around for the panel, and listen to the questions, and be part of that conversation.’

Read: Film Review: Bloodshot Heart is Giallo all the way

The streaming model, three months on

Richard Sowada is putting the final touches to the Couched version of the Revelation Perth International Film Festival using a streaming model. He is more comfortable than most with an evaporated audience because he, program director Jack Sergeant, and general manager Suzanne Worner, spread the festival over many different venues so it is not so centralised and formal. Rev is also using a streaming service to create a more continuous experience across the whole year.

According to Sowada, they are getting a high level of pass sales, and have probably sold around 20 per cent of their tickets before starting, as compared to 30 per cent in a normal year. ‘This is an impulse buy. It’s not like a destinational scene where you have to get yourself organised and make sure you get there early in case it sells out.’

What is their most popular program? ‘We have a live event called In The Shadow It Waits, which is a 60-minute live horror movie basically. There’s six actors live streaming across Australia and they play a game online which opens a portal from the spiritual to the physical world.’

Between virtual and real, the horror breeds

In The Shadow It Waits was invented by Michael Beets. ‘The whole thing started two days into the initial lockdown. I was thinking of how to deliver something to audiences while we’re all in this situation,’ he says. ‘At that point people were starting to zoom play readings and I thought it might be really interesting to push that a little further and create a new platform of sorts, where we blend film and theatre in one piece.’

Those experiments have their own tradition in which performers interact with projected images. In VR, the audience/user/participant can roam around inside the action which puts that question of point of view right in the middle of the experiments. Do the performed characters know you are there? Are you a character yourself? Do you affect the action?

For the last ten years Beets has been striving to put live action into a virtual world. ‘The technology isn’t there yet for that to do it properly,’ he acknowledges, ‘so I just felt at this point, it would be really interesting to make a film. That’s how I can make a show like a theatre show, that looks and feels like a film.

‘And then then the hard part really came from there. Because we’re on lockdown so I’d find six actors and direct and rehearse and create a show. Yeah, completely in isolation without ever meeting. Anyone.

‘Luckily I found six great actors who are willing to pretty much change their own camera angles and do their own lighting.’ There are 61 scenes and 58 camera setups.

‘Luckily I found six great actors who are willing to pretty much change their own camera angles and do their own lighting.’

He also reached back to the early days of television drama and sitcoms, in which actors perform live in front of an audience who represent and laugh for the audience at home.

They agreed the story would be performed live, with all the tension around rebuilding after mistakes or taking advantage of improvisation. The audience is a passive spectator watching the Zoom feeds but not contributing to them.

The show was written by Michael Beets and rehearsed until they got it right. The actors can see a screen showing the audience’s point of view, and wear an earphone so they can hear his instructions. Like a director and vision-switcher, he is cutting shot by shot on the run. It is a tricky combination.

They had a two week run, got some attention, and then did a deal with Richard Sowada for a pair of performances, which continue to be unrecorded appointment viewing. Like theatre, every event is subtly unique, with the tension of being created on the spot.

Beets is fascinated by the power of horror in virtual reality. It really is a medium to scare the living daylights out of the audience.

From year 12 in Castlemaine to 6am in New York

The Castlemaine Documentary Festival has been curated carefully around the experience of that hybrid group and individual audience. There are only three films, all assembled because they can create a conversation, all supported by an excellent panel. There is one film per night, on a Friday, Saturday and Sunday.

‘What is Democracy feels like the political standout,’ says Claire Jager. ‘We get into the program with Picture Character about emojis which feels on the surface it is very light but it is actually questioning this Silicon Valley consortium. And it really does question it. And the young activists in the film are just fantastic.

‘The panel with the producers in New York will be moderated by Adeline Johnston and Allycia Cox, bright year 12 students from Castlemaine Secondary College. They are right into it, which is wonderful. I also have a great local intern working with me – Wynne Kelly-Buttfield who’s also a second year screenwriting student studying at RMIT.’

Once again we are seeing the power of a panel linking an audience with a creator on the other side of the world. Mind you, it is six in the morning for them, though it is pleasantly in the middle of a cosy winter night in Castlemaine.

For Michael Beets, the COVID festival dilemma is taking the production of In The Shadow It Waits far beyond its origins. It is travelling the world without tickets or passports, unquarantined and slippery.

‘It’s been going really well. I haven’t even really pushed it out to be honest. We’ve got people coming to us and asking us to be in their festivals. Because it is online, why not experiment with stuff that is live? There is some hesitation I have come across In some festivals, who say it is not considered to be a film because it is live.’

That means the company will have to gather together to make an intricate performed work at some very strange times of the night. They will start at 3.00am if they get into Venice, for instance.

At the moment they are booked for Electric Dreams, a UK festival specifically curated as a response to our Covidian times, run by XO Labs, who pivoted the Copenhagen Documentary Festival online in six days, to pioneer the whole festival stampede online.