The Queens Birthday list might be thin but the awardees have dense, interesting careers with a swerve towards cinematographers, financiers and the late John Caldon.
David Tiley 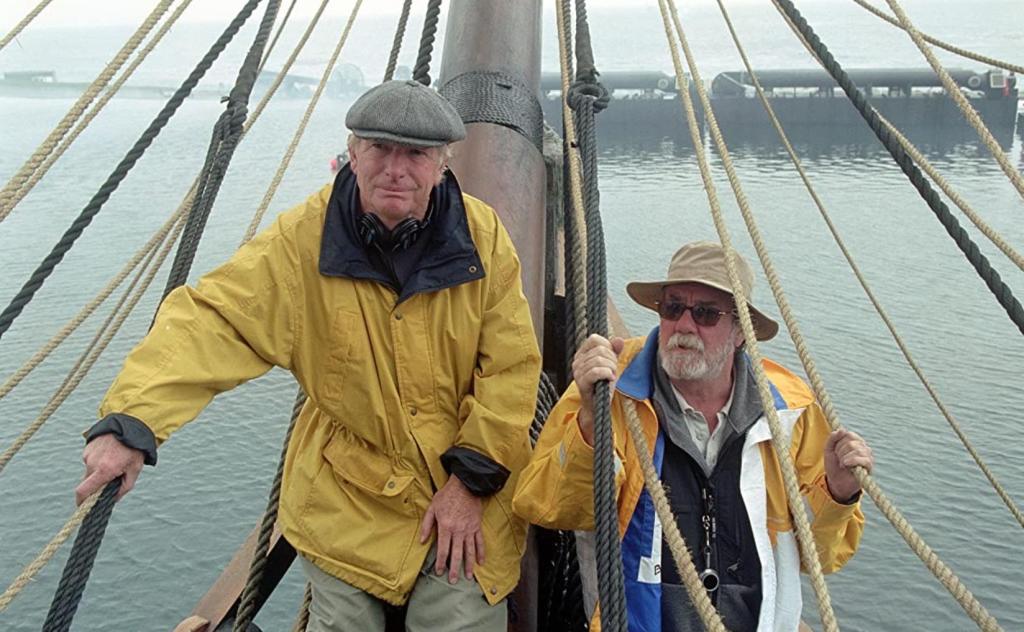 Peter and Weir and Russell Boyd on Master and Commander. Boyd has the only Officer award for a screen person in the honours list.

The screen media honours list for the Queen’s Birthday Weekend is very thin. Cinematography rightly scored a moment in the limelight, as Russell Boyd became an Officer in the Order of Australia, ‘for distinguished service to the visual arts as a cinematographer of Australian feature films and television productions’, according to the citation.

It was quiet in 2020 too, with screenwriter Jan Sardi and production designer Robbie Perkins standing out, but 2019 was a bonza, bumper list led out by Ita Buttrose with Fiona Cochrane, Suzanne Baker, Sigrid Thornton, Ray Argall, Kerry Heysen-Hicks, Eric Bana and Ken Sutcliffe in the gang.

Born in 1944, he was photographing shorts by 1969 with The American Poet’s Visit, directed by Michael Thornhill and produced by Ken Quinnell through The Sydney Cinema Journal and released through the Australian Film Institute and the Sydney Filmmakers’ Co-op. Older readers will smile at the memories attached to those names. The American poet was Kenneth Rexroth.

He shot Picnic at Hanging Rock, The Last Wave, Dawn!, Chain Reaction the TV series of A Town Like Alice, Gallipoli, Starstruck, The Year of Living Dangerously, Tender Mercies, Phar Lap, Mrs Soffel, Burke and Wills, Crocodile Dundee, High Tide, Prisoners of the Sun, Turtle Beach, White Men Can’t Jump, Dr Dolittle, American Outlaws, Master and Commander, Ghost Rider, The Way Back and The Defector in 2018. And those are only the films that most likely to connect with readers today.

Peter Ivany was also made an Officer ‘for distinguished service to the community as a supporter of sporting, arts, film, not-for-profit and natural science organisations.’ He was made a Member in 2007.

He is less well known publicly but has a special place in the history of the Sydney Film Festival. Now 67 years old, he was the CEO of Hoyts from 1988 to 1999. He started as the Fink family launched it on the stock exchange, and prospered in the stormy years when the company was sold to venture capitalists and then went public in 1995. He started with 40 cinemas, and ended with a global business in a dozen countries with 2000 cinemas. Kerry Packer’s Consolidated Holdings bought Hoyts and stripped it right back to Australia and New Zealand.

By then Ivany was running his own company, Ivany Investment Group, and was truly launched into a wider public life which includes chairing the Governing Council of the Australian Film, Television and Radio School, Chair of the National Institute of Drama Art’s Foundation Trust, Chair of the Sydney Swans Foundation and Chairman of the Life Governors Advisory Council of the Jewish Communal Appeal.

He was on the Board of the Sydney Film Festival and The Museum of Contemporary Art, and the President’s Council of the Art Gallery of New South Wales.

At a crucial time in the history of the Sydney Film Festival, he and his wife Sharon donated $200,000, before pumping up the Museum of Contemporary Art with $1,000,000 to invest in sustaining future programming.

Mandy Walker ACS ASC became a Member of the Order ‘for significant service to film as a cinematographer, and to professional societies’. She is deeply respected, and has been a key figure in the increasing power of women in the cinematography department in Australian screen production, though it has a long way to go.

Born in Bundoora in 1963, she was a child of the Melbourne film scene, inducted partly by John Flaus in one of his many educational incarnations. Starting at what the Australian Cinematographers Society calls an apprenticeship, she was a clapper-loader on Skipping Class, a 1983 docudrama from Chris Warner and Maureen McCarthy, a production runner on John Richardson’s feature film Dusty, and a 3rd Assistant Director on Strikebound, from Richard Lowenstein. Her first camera credit came from Philip Brophy’s Salt, Saliva, Sperm and Sweat where she paired with Ray Argall, and then shot his first feature, Return Home. She has come a long way from that small, exuberant world.

She shot Eight Ball, Argall’s second film, then Kathyn Millard’s Parklands, then Shirley Barrett’s Love Serenade, Lawrence Johnston’s Life, The Well directed by Samantha Lang, Lantana directed by Ray Lawrence, Australian Rules directed by Paul Goldman, and then Shattered Glass, her first film in the United States. That was in 2003.

Five years later, she was the cinematographer on Baz Luhrman’s Australia, then back to the US for Beastly and Red Riding Hood. She returned to Australia for Tracks and See-Saw Films, but settled into the Hollywood swing with Hidden Figures and Mulan glowing from the list.

Ricci Swart becomes a Member ‘for significant service to the media and film industries, and to the community’. As a producer she was the owner of Ricci Swart Multimedia from 1999 to 2009, working with multimedia approaches to education. The company was folded into the family investment group, Viewgrow Capital, representing the family of property developer Eddie Kornhauser.

Like Peter Ivany, much of Ricci Swart’s impact has been financial. She was a Trustee of the Koori Heritage Trust for eleven years, is a Development Board Member of the Centre for Adolescent Health at the Royal Children’s Hospital, was a long term Board Member of the Australian Centre for the Moving Image and a Trustee of the Telematics Trust, which supports ‘the possibilities of using information and communications technology for educational purposes.’

Simon Bouda received the same honour ‘For significant service to the television and print media, and to the community.’ He has been a senior journalist with Nine Network Australia for 31 years.

There is a sad edge to this list. John Caldon received a Medal in the Order ‘for service to business through media content distribution.’ He died of cancer last February, and we at Screenhub can testify to his patience, common sense, financial acuity and clear mind.

He was the personal and professional partner of food and cooking show personality Lyndey Milan; the couple first went to Mipcom in 2011 with a plan, a new company called Flame and a bunch of cooking shows. It was a historic moment, right at the beginning of an empire which would grow to Flame Productions, Flame Distribution, Flame Studio, Flame Corporate and Flame Stock. Wildflame was built in London with Flame Media Gmbh in Germany.

Read: Flame Distribution: From entrepreneur to oligopoly: possible futures for the screen sector
[a 2015 story which feels like another world]

LinkedIn puts his background concisely: he earnt a ‘Master of Arts in Classics from Cambridge University and, after migrating to Australia in 1973 became a tax partner with Price Waterhouse. One of the founders of Macquarie Bank from 1984, when he left in 1998 he was Deputy Managing Director; head of relationship management for key clients and government; head of project and structured finance; head of infrastructure funds management and joint head of underwriting.’

Read: How the arts sector fared in this year’s Queens Honours List