To mark International Day of People with Disability, Stan adds an award-winning Australian doco about the search for intimacy by young gay playwright with cerebral palsy. The film's director-producer Pip Kelly tells us about making it and getting it on TV.
Rochelle Siemienowicz 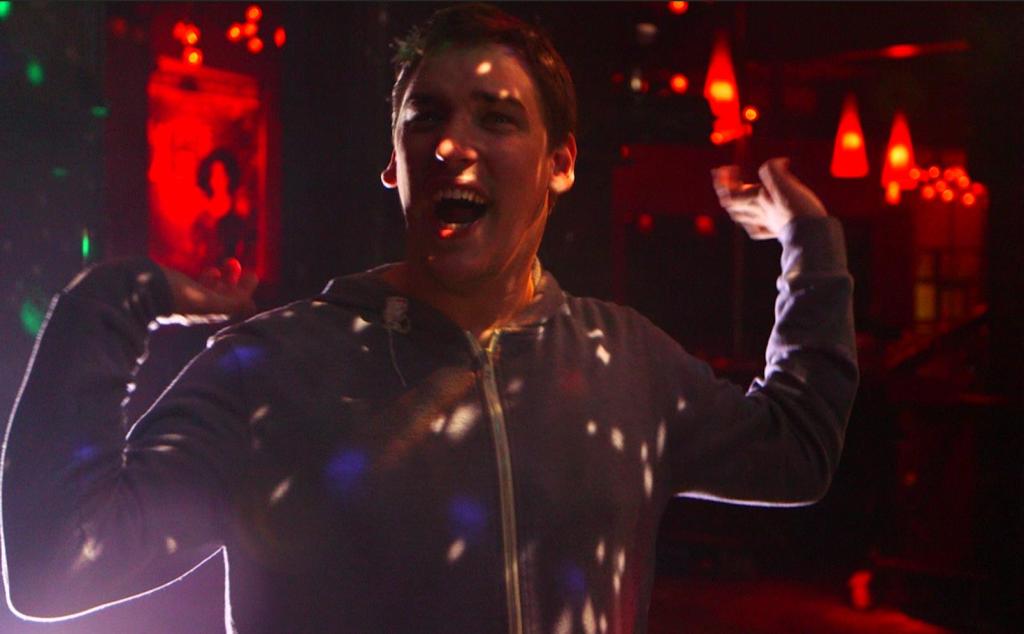 In the opening scenes of the half-hour documentary Thomas Banks’ Quest for Love we see a young gay guy organising a hookup on dating ap Grindr. It’s all looking promising for a fun fling until the other man opens the door and quickly registers that Thomas is not what he was expecting.

Watching this scene play out is a bit uncomfortable – the quick excuses, the rudely shut door – but such rejections have been common for playwright, performer and disability advocate Thomas Banks, who lives with cerebral palsy. Challenging those snap judgments that other people make about him is part of why he was so keen to put his experiences on screen.

And challenge it he does. We follow him into nightclubs, where other guys often think he’s just extremely drunk. We go into gay saunas and even into a loving relationship that doesn’t turn out quite the way Thomas had hoped. We also get to see Thomas’s parents (he comes from a large supportive sheep-farming family near Geelong) and his work as a writer and journalist, including a scene where he turns to cover the Logies red carpet and asks Hamish and Andy why there aren’t more people with disabilities on TV, and why we don’t see them having sex. (To their credit, they handle it with style and humour.)

Director and producer Pip Kelly spent six years making the fully independent 31-minute documentary that premieres on Stan today (3 December) on International Day of People with Disability (IDPwD). Speaking on the phone to Screenhub from her hometown in Perth where’s she’s currently based, Kelly says she feels incredibly privileged to tell Thomas’s story. She met him about ten years ago in Melbourne at an event she was producing: the Victorian Youth Arts Market that brought together about 50 independent groups making work in the youth art space.

‘Thomas brought a very early version of his play with Platform Youth Theatre to that market and I met him there,’ she remembers. ‘He walked through the door with this big smile and he was very charismatic and magnetic and friendly,’ she remembers. ‘Then I saw his play and I was just blown away by it as was everyone else in the audience. It was really stripped back, just him and another actor who was sort of like his avatar. He shadowed Thomas and helped to express Thomas’s inner thoughts. It was very moving.’

As they got to know each other and became friends, Kelly asked Thomas if he’d like his story on film. ‘He was already sharing it in so many different creative ways, so adding a film to the mix was a natural progression. The first time we filmed together was at the Midsumma Festival that year, and some of those first scenes are still in the film.’

Initially conceived as a five-minute short documentary the project grew as Thomas’s story developed and his life unfolded ‘with lots of twists and turns.’ ‘He was growing and developing as a person and as a man, and it became a kind of coming-of-age story. Also, his stage show grew to being so much more than the initial two-man show.’

People with disabilities are often the best teachers

She began down this track with an Honours degree in anthropology from UWA, then completed studies in documentary from the VCA in 2008. There was work on factual productions for companies like 360 Degree Films, Matchbox Pictures and Renegade, including on Jailbirds (ABC), Miss South Sudan Australia (ABC) and Monash: The Forgotten ANZAC (ABC), but Thomas Banks’ Quest for Love is her directorial debut.

As the project grew, Kelly teamed up with producers Shannon Owen (Miss South Sudan) and Phoebe Hart (Orchids: My Intersex Adventure). They ran a successful Pozible campaign which also partnered with the MATCH program by Creative Partnerships Australia that enabled a slightly larger crew (including cinematographers Dan Schist and Richard Kickbush) and post-production including editor Judy Yeh in Brisbane. A lot of the early footage was nevertheless captured by Kelly herself on her DSLR camera.

Getting the film broadcast on television to as wide an audience as possible was always a goal. The Stan deal came about a few months ago in the most straightforward way. ‘I just sent an online screener of the film with some of the awards details to the admin email, asking them to pass it on to the appropriate person. She passed it on to head of acquisitions, who apparently watched it the next day. So that was wonderful that it got seen and appreciated on its own merits, not through personal contacts or anything. Then we were talking about the best time to launch it, and I mentioned December 3 was International Day for People with Disabilities and we worked towards that.’

Scenes from Thomas’s theatre show, and the rehearsal process and dream sequences, are creatively woven into the film. A therapist interrogates Thomas from a projected screen, and his avatar provides voice-over narration for the audience. And of course there is an Auslan interpreter on stage.

One of the film’s key themes is communication difficulties – the issues Thomas encounters in trying to express himself in his everyday life. His mother tells us his traumatic birth led to the cerebral palsy, which has impacted his speech and means there are often assumptions he is also intellectually challenged, which he is at pains to stress is not the case.

But for those who don’t know him, it’s difficult to understand Thomas’s speech without subtitles or an assistant, or the text-to-voice machine he uses when all else fails. In one scene we see him struggling to make himself understood on the telephone, attempting to spell out a name, letter by letter, yet still being misunderstood.

‘Thomas really demands people stop and slow down and listen to him.’

How did Kelly navigate these communication issues, especially during filming? ‘Thomas really demands people stop and slow down and listen to him,’ she says. ‘I became accustomed to understanding him by spending time with him, though I still get words wrong. But it’s really about spending the time, focusing and adjusting my ears. And we wanted the audience to do that too, so even though Thomas’s voice is subtitled in the film, we hope that by the end of watching it, people will have made progress in understanding him.’

Great efforts have also been made to make the film accessible both to festival audiences and on Stan. Ahead of physical screenings, venues were called and emailed about wheelchair access and the number of wheelchair seats so those details could be given out alongside screening times. ‘It was a good experience talking with cinemas about those issues and many cinemas have accessibility policies which is great to see,’ says Kelly.

‘We have contacted many disability orgs and peak bodies around the country to let them know that the film is now screening on Stan with the option of Closed Captions and Audio Description, and we also spoke with Vision Australia Radio which has a large following.’

Kelly says that one of the loveliest things that has happened during the film’s festival run is that people from the audience who are from the LGBTQIA+ community and also have a disability have reached out after screenings. ‘They have more or less said, “Thank you for telling this story. This is my story too and please keep spreading this story.”‘

Thomas Banks’ Quest for Love is available now on Stan.