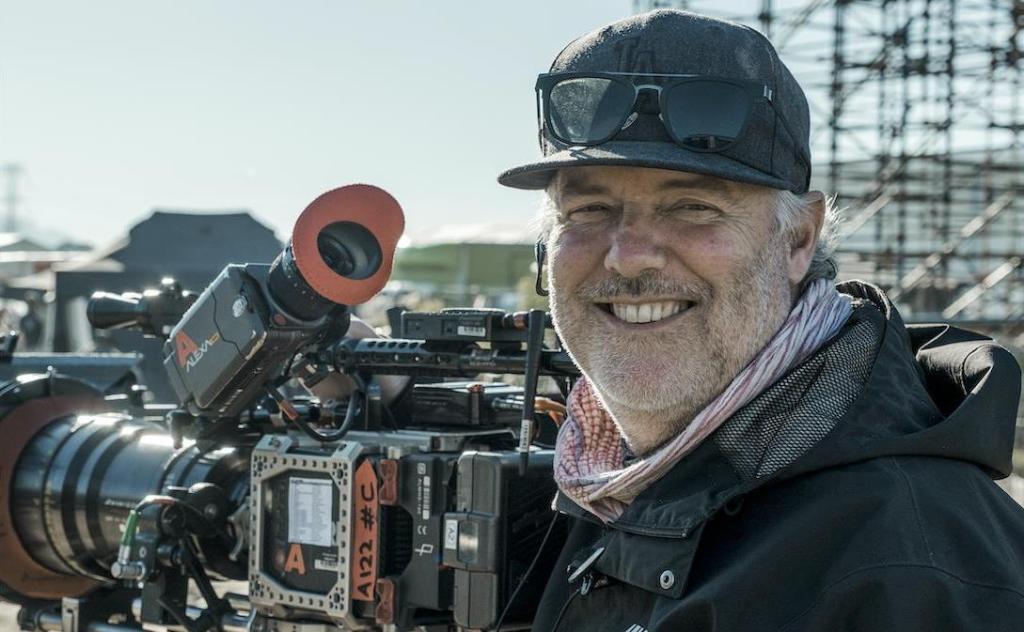 Ridley Scott’s Raised by Wolves is a story about androids who protect adults and raise children. It ponders the nature of belief, the contradictory and ambiguous construction of humans and the weird of religion. It is a thread which began with Alien; Bladerunner was also a part of this journey.

Though this ten-part HBO series was created by Aaron Guzikowski, Ridley Scott is a key producer, directed the first two episodes, and used Scott Free productions to nurture a worldscape and philosophical underpinning that belongs to his expanding vision and personal narrative.

The cinematographer on most of the production is Ross Emery ACS, whose own story is threaded through international sci-fi shows brought to Australia, until he became a solid creative figure in Hollywood.

The series is pretty economical, shot in a studio in South Africa and in rocky gulches an hour away. Scott uses simple artefacts like a semi translucent orange dome to create distinctive interiors, with sleek interstellar technology defined against stone age grunge. The story plays out in a dinosaur graveyard. There are a bunch of children, various battered adults (usually dressed in similar dusty uniforms) so the frame is kept lively by terrific blocking and exact, dynamic composition.

The first two episodes were effectively a feature length pilot which defined the look. Emery came in from the third episode, and worked within those major decisions. He spent half an hour in Scott’s visual war room with his references and storyboard sketches on the wall, and absorbed the style of the show.

‘It’s a little bit similar to shooting second unit movie where you absorb as much of the intent from the main director and the main DP as you can,’ he explained. ‘The story moves on so quickly after episodes one and two, it’s an interesting thing to adapt all of those rules to the new storylines.’

What makes him fun to work with?

‘I’m an open book,’ he replied. ‘I like to think that I don’t really have a style. I don’t really have any preconceived ideas about the projects that I enter into. I don’t bring anything to the project that isn’t literally inspired by the project itself. I think that people that I work with appreciate the fact that I don’t turn up and do the same thing I did on the last film. I think some, I like to sort of get the sense of reinvention on every single project, because I think every project does make you react differently’.

Besides his visual and technical adaptability, he loves a good philosophical discussion, which were a lot of fun with both Ridley Scott and his son Lucas.

Plausibility was a big issue, because there are plenty of challenging storylines in a show which is about belief and thought. They can’t play cheap games of movement and threat to get through.

‘One of the things we hit on as a concept is essentially like a kind of ethnographic documentary, where you present things in such a bland manner that the preposterous become believable. When you put characters against a backdrop like that you can’t help but see the characters a bit more clearly.

‘There’s a certain duality in almost every single character in the series. Sometimes screenwriters like to have anchor points in terms of characters. In this show there’s not too many anchor points. And that’s a deliberate device to keep the audience a little unbalanced and keep them thinking that anything could happen.

‘I think audiences are so conditioned to tropes these days, and especially the basic screenwriting visual tropes. So it is nice to get involved in a project which was really really happy to work against those. To make sure we weren’t presenting something in such a way that would determine a character’s outcome.’

For all the versatility of a good professional’s work, there are always stylistic tendencies that give them away. Ross claims his lighting is a signature tell.

‘Anyone can do backlight. But if you are just relying on backlighting every single shot, you are not testing yourself, or taking a step off the edge. So backlight appears a lot in my films, but if it doesn’t need to be there, it shouldn’t be there.

‘The lenses that I gravitate to are probably a little wider than a lot of people. I’ve always had this idea that when you’re looking at the picture of an actor, you should have the sense perspective-wise that you could actually almost reach out and touch their shoulder. You want that connection. We certainly did that big time on The Wolverine with Hugh Jackman.

‘I’m not slaved to colour palettes or anything like that. So it’s probably been lensing which is my most obvious tell.’

He likes to define his aesthetic strategies in terms of the relationship between the technology and the context. Certain kinds of lighting work best in particular places, like that dome in Raised by Wolves which means he then tries to get the best out of that particular discipline. For a while, he was seduced by 3D.

‘I did a deep dive into 3D, and I found you can kind of successfully make a 3D film without a 3D camera. If you rely on some tricks of colour contrast and lensing, which means that you light the subject with subtly different colours in the background, and as you build layers up it will actually appear as if the image is 3D.’

Learning to be humble

In the last few years, he has found his urge for affectations and intricacies dying away.

‘It all gets knocked out of the park when an actor puts out a great performance. It doesn’t matter if the lighting isn’t perfect, if they didn’t hit their mark. If the focus drops for a second there is nothing you can do that matters compared to a really great performance.

‘When you come to that realisation, I think as a cinematographer you have made a really important step. It doesn’t mean you stop trying, but at any time you are trying as hard as you can to support the performance.’

Ross Emery lives in Sydney and works around the world. He’s a migratory being, with six uncles who are architects, the son of a documentary maker who worked on a lot of fundraising projects and took his son with him. His first real job was on the Libyan border, and he got very good at schlepping gear through customs.

Emery tried to escape with the first year of a law degree, but the lure of cinema was much too strong. After a year at Sydney Technical College he did a stint at Channel 7. By the mid-80’s he was working on clips with people like Alex Proyas, and climbed on the production escalator with operating and second unit shooting on films like The Island of Dr Moreau, Dark City, and the three Matrix Films while he shot Underworld: Rise of the Lycans, Bait, The Wolverine and I Frankenstein.

The key title was The Matrix, which triggered the truly Hollywood offers.

‘The Australian industry now is a huge pool of talent and infrastructure and the technical side that they can use for the Australian films that have been trained and brought through on working on international projects and vice versa,’ he said. ‘The international producers appreciate the fact that Australian crews have a much more invested kind of nature when when they’re working on projects, which is why they are popular.’

Walking the streets alone and curious

What does Ross Emery do when he is overseas and not on location?

He goes to art galleries, focusing mostly on photorealistic work, particularly when he feels visually blocked. But then he just wanders, indulging his passion for buildings and landscapes, suffusing himself with the built environment, with art which moves only with people and the changing textures of the day.