Going global with small productions – and brew some decent beer

Mark Montefiore of Letterkenny and Bad Blood has a unique mind and a feel for starting small and REALLY maximising value.
David Tiley 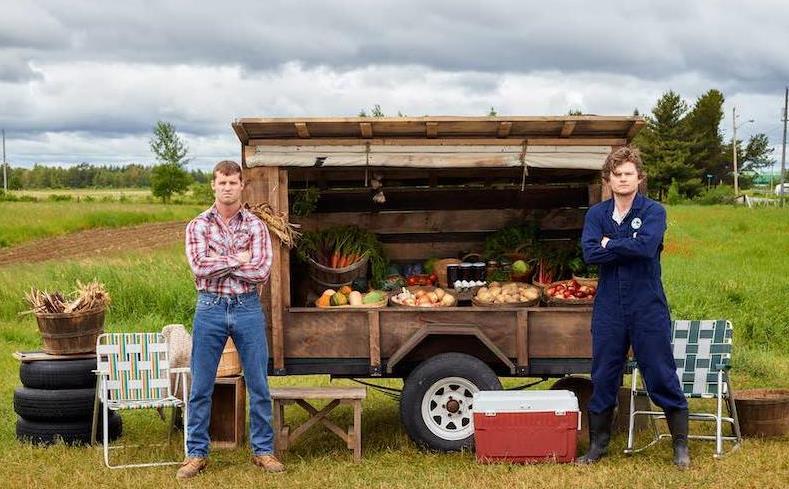 Letterkenny. A whole series dropped to be binged jus

Mark Montefiore is the extremely effective Canadian producer who works through New Metric Media and is known for comedy series Letterkenny on Hulu and drama Bad Blood on Netflix. He was invited to Screen Forever 2019 for the marketing sessions, but also as post-disruption philosopher of opportunities.

Letterkenny is an excellent comedy property, which is travelling well and building substantially. He has been determined to use relentless digital engagement to build the brand, including creating an entire beer label in the real world to match the fluid schlurped incessently in the series.

The three words that headline his website are PREMIUM. SCRIPTED. BRAND DEFINING. Indeed, he doesn’t talk about shows but about brands, a sure linguistic tell about his post social media world view.

Scrabbling to find a common thread in his ball of energy, I asked him about his single defining drive.

‘Maximisation’. I blinked at him. Not the normal language. Not a cliche. Not even just about media.

‘It’s more of a concept than anything. How do we take something in one current form and augment it in as many ways as possible? In this industry it is about maximising revenues and eyeballs. We find things that work well in essence, and translate them into international formats.’

He starts with localisation. ‘We are talking about indy production for small regional broadcasters which punch above their weight,’ he acknowledged.

That brings a very particular problem. ‘They can’t compete with major narrative studios. They don’t have the budgets or the marketing power – they are at the other end of the spectrum.’ The solution is to get really good locally, create lots of attention, and then format the show. Because the production itself is less likely to travel than the ideas, the storyworlds, and the potential for more series. In other words, maximisable material.

Here adroit, energetic social media is very useful; remember that Canada is really a string of smallish regional cities in a long thin ribbon, so building a community around a local show or lifestyle is not so hard, if you are smart about pop sociology. Beer, for instance. Roadshows. Theatre versions.

‘Everybody needs to be rat cunning,’ he said. ‘They must figure out where the opportunity is. Nothing is stable, everything is shifting.’

But he does have some rules.

1. Shows must be made to the highest quality. Excellence cuts through the noise, and the days where quirk worked are disappearing. Sheer standards are one key to subsequent series.

2. Budget and quality are separate. Scale and budget have to enable quality.

3. Everyone is running after the big streaming companies. We are hypnotised by Netflix. Fine for studios, not for small companies built around a few great people. But the streaming effect creates a huge international landscape of exhibitors desperate for content, unable to create huge infrastructures, but with existing audiences. In order to survive the streaming onslaught, they need quality. So, make the show modest, find out what really grabs your audience, and boil for a sufficient time in pure essence of quality.

The day of big broad comedies set in nowhere which appealed to anybody now appeals to nobody. The more specific and niche the broader it ultimately is.

The way to grow is to grow smart.

Mark Montefiore expanded on his vision of specificity on a Screen Forever panel.

Canadians were trying to sell those broad comedies to compete with US studios and they failed, unable to reach even a niche audience.

This led to the opposite strategy:

‘We’re starting to see some other series as well from other parts of the world that are new in their specificity. They are really authentic and niche to a territory or even a particular region. Letterkenny is as much Canadian as it is American, but it is mostly just one really specific area of Ontario.’

The series is as specific as Fargo which is ‘a different place than anywhere else in America. And they sound different. They speak differently, you know, act differently. But that’s what made it so rich and so accessible.

‘ So we’re really trying to find projects that are so specific that they push through a threshold of view that they end up being broad. Yeah. And I think that’s seems to be trending now, especially in comedy, maybe maybe a little less in drama.’

Again, he talked about social media.

‘The skill is really understanding your audience. We got lucky with Letterkenny that our audience appeared on Youtube. And that gave us data that told us who they are, where they are, what age what sex, what part of it country are part of the world and what they watching it on.’

That seems to be the golden road, while live shows can help you get more of an idea. ‘But you do everything you can possibly can to understand the audience of that particular project and what motivates them.’

All familiar. But this is the crucial twist – you can’t build a show for a particular audience. ‘I wouldn’t recommend trying to create for an audience. You have the voice, and keep that voice intact in the creative property.’

The property pulls the audience, the creators study the audience like crazy, and discover the fan base and create other opportunities for them, which ultimately creates a brand.

‘Okay, we know where our fanbase is. Eighteen to 34 year old males primarily, and beer is not a bad idea for them.’

But here is the twist.

He explained that beer idea in more detail. The usual way of thinking about the beer is to sell the product placement rights and maybe benefit by co-signage in liquor stores. Instead New Metric Media hired a craft brewer to make a special brew, which was not obtainable in the market. They made that beer and its cans into prizes that fans competed for.

Later on they expanded a bit so the beer would go on sale for particular promotions or visits of the theatre show, or just as loyalty rewards. See the difference? Maximisation.