A striking new piece of public art celebrates the legacy of actor David Gulpilil AM in both the early and later stages of his career.
Rochelle Siemienowicz 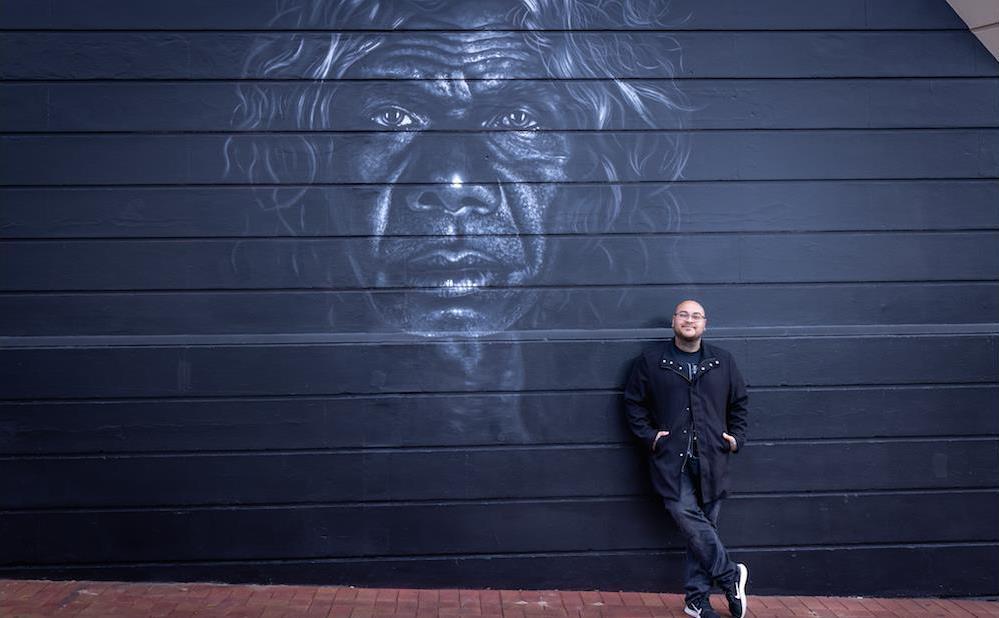 A new hand-painted mural celebrates the life and legacy of Yolŋu actor, dancer, singer and painter, David Gulpilil AM. The two large hand-painted black and white images of the iconic performer can be found on the east wall of TANDANYA National Aboriginal Cultural Institute, on Kaurna Country, Adelaide.

The permanent work was designed by South Australian artist, Ngarrindjeri man Thomas Readett, who painted it over three days together with Apparition Media artist Laura Jackson. Apparition are an outdoor advertising agency specialising in hand painted imagery that, according to their website, ‘blurs the line between advertising and art.’ They are the outfit behind the famous Adam Goodes mural in Sydney and the Gurrumul mural in Darwin.

Approved by Gulpilil personally, the mural was commissioned by ABCG Film in collaboration with TANDANYA and supported by Arts South Australia, Department of Premier and Cabinet, and Screen Australia’s P&A Plus program.

The Premier of South Australia, Hon Steven Marshall MP said, ‘David Gulpilil is a national icon who has a long connection to South Australia, from his much-loved role in Storm Boy (1976), to currently living here, which is why we are thrilled for TANDANYA National Aboriginal Cultural Institute to be the home of a permanent mural in his honour.’

ABCG Film are the distributors of the new documentary in cinemas now, My Name is Gulpilil, directed by Molly Reynolds, and marking Gulpilil’s 50th year in Australian cinemas.

Read: Film review: My Name is Gulpilil captures the legacy of a star

The images in the mural include a young Gulpilil in 1978, from a filmed production in which he performs traditional dances on Country representing The Kangaroo, The Emu and The Fish. The film 3 Dances Gulpilil can be viewed here in the National Film and Sound Archive’s online David Gulpilil Collection, and if you’ve never seen this before, it’s essential viewing that showcases the young performer’s grace, agility and wit and give some idea of why our cameras have been mesmerised by him.

The part of the mural celebrating the young Gulpilil in the film 3 Dances. Photo by Razan Fakhoury.

The second image is of Gulpilil almost 30 years later, and based on the photograph by Adam Taylor as part of the publicity campaign for Ten Canoes (2006), the first Australian feature film to be made entirely in Australian Indigenous language.

Directed by Rolf de Heer and Peter Djigirr ,Ten Canoes won the Un Certain Regard Special Jury Prize at Cannes, was Australia’s official submission for the Oscars, and achieved almost $4 million at the Australian box office.

Rolf de Heer, who has collaborated closely with Gulpilil on many projects and is a close friend, said: ‘David’s impact on Australian cinema is profound. I think he’s changed the way we perceive it is possible to make cinema in this country.’

Based on the publicity photograph for Ten Canoes (2006). Photo by Razan Fakhoury.

The artist Thomas Readett said: ‘It’s my absolute honour to be involved in this project, painting David Gulpilil and creating a mural that celebrates his life and legacy. It’s really important to have murals like this that celebrate First Nations Peoples, and it’s great seeing how the public and community respond.’

According to the media release, word of the mural has spread fast on social media around, ‘Australia as well as the Pacific and as far away as the UK and Argentina, in a show of the worldwide respect for the national screen icon.’

You can watch the making and launching of it in this video and hear the artist talking about the process.