The Beached Az web series is back, fronting a social media and documentary campaign about climate change.
David Tiley
[This is archived content and may not display in the originally intended format.] 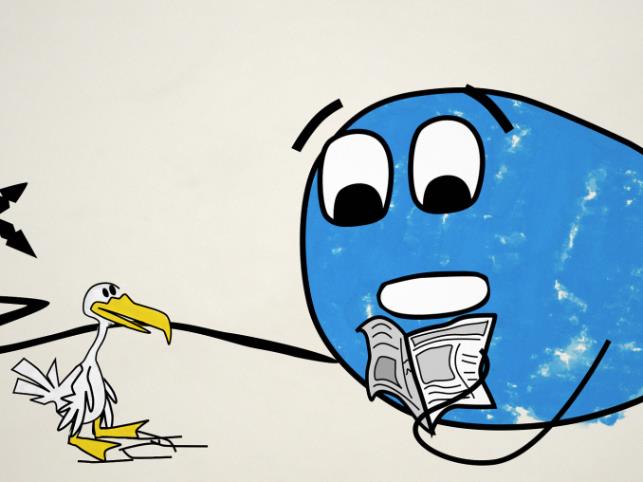 Our favourite critters discover the truth about the advancing seas. Image: production company.

The story of the winsome Beached Az series of web animations follows our changing politics and the evolution of social media. When Anthony MacFarlane, Jarod Green and Nick Boshier first released it 10 years ago, the ‘information superhighway’ was a simpler place.

‘We spend an enormous amount of time trying to get it the way it looks’ says animator Jarod Green. ‘That was literally the best drawing I could at the time. I had thoughts of Pixar but as I started to learn animation I realised I was really bad at drawing. And those qualities made it as iconic as it was.

‘Its patheticness is what makes it awesome. We embraced it and pretended it was intentional, like all filmmakers do.’

The trio recorded the voices as they lay on a bed, covered by a doona to create quiet, with a crappy microphone. After two series, exposure on the ABC and cash from Screen Australia, they had pretty well explored all its possibilities. However, it was still a nimble format, which meant it could be pulled out in emergencies. They did a tribute to Christchurch after the earthquake in less than four hours.

The gang went their separate(ish) ways, although they are bound together by Beached Az, which became, according to the release, ‘two international television series, a touring live show, a chart-topping iPhone app, and a multi-million-dollar merch machine.’

However, says Green, ‘We all stayed in the short form space. Beached Az gave us the confidence we could perform and excel in that space – it gave us the ability to be confident.’

‘The animation is still quick to do but we spend a lot of time getting the script and the story right.’ – Jarod Green

Boshier went on to Bondi Hipsters, Nice Shorts and Ludo Studio while  Anthony MacFarlane, the one who looks all right, formed The Handsomity Institute and Rad which makes online content in a social media environment. Jarod Green hung in with him along with companies called Radical Love and Tiny Green Gorilla Productions.

As they moved on from their mid-20s they gained the usual social responsibilities, such as children and lovers. Life became more serious and they learnt to sell their insights in more commercial ways. ‘It launched our trajectory into the social space,’ says Green.

‘Brands were coming to us. We understand the world of Facebook and Youtube. We are using content to build community and repurpose visual content’. He maintains that, ‘all good brands have opinions and a voice and a social purpose.’

As the tenth anniversary of Beached Az loomed up, they decided to do another series. But this world is very different, and they could expect no more than a 24 hour giggle which would vanish into the storm of content. Not only that, Green acknowledges that the world does not really need another 10 episodes of an extended joke about accents.

They had already done some work with Greenpeace, and the connection between a whale-based comedy show and climate change was pretty obvious. So they began to build a more ambitious project which allowed them to reach an audience, focus on empowerment and test the limits of social media.

They didn’t go back to the ABC, because they didn’t want to take on a broadcaster’s different needs. Instead, they are supported by Screen Australia, which is also interested in ambitious and cutting edge challenges. And they also became involved with Facebook, which is working with them to extend its own social media stickiness and functionality.

Gluing all the bits together took 18 months, because it now has three different dimensions. The Tenn(ish)  anniversary series has the usual daft jokes, improved by the use of an international animator but still rooted in the same naive style. As Green says, ‘The animation is still quick to do but we spend a lot of time getting the script and the story right. We are now miked properly and it is a really nice pipeline in that respect.’

Beside that is a short documentary series, in which the seagull interviews serious players in the climate change movement.

‘We are three middle aged white guys from North Sydney with no technical knowledge of the oceans,’ he acknowledges. ‘So a doco series seemed to be a way to build a companion piece. Can we make this online audience do something in the real world? Clicktivists and emojis are not the metrics now. It is how many people can be mobilised in the world, and motivated with an online series.’

Mobilisation is the key

Then they began a humungous process of finding supporters and advocates among the scientific and activist communities. Green argues there is a huge amount of wisdom and positive energy, but pulling it together is both a challenge and a benefit. They were not asking for money, but for their members and supporters to advocate and spread the content.

‘I thought it would be a real challenging uniting the unis and conservation agencies but everyone saw the possibility of mobilising audiences. Charities rarely get to discuss facts through the comedy lens. And this project doesn’t get to compete with their classy documentaries.’

That is all good social activist practice, of course, but they are working with a really valuable, deeply embedded, patient and enraged movement.

The project also has a mobile game called Bleached Az, developed in partnership with Chaos Theory Games. It will be available for free, supported by ad revenue, 20% of which is spent on funding Carbon Neutral to plant trees. Green has a sweet statistical connection – he claims that 16 grams of carbon will be removed from the atmosphere every time someone plays.

That rhetoric about cutting edge project is inherent in the project too. As anyone who is using social media to run a serious campaign knows, the space has become very complex and abuzz with different approaches.

‘Facebook jumped on to help us as a case study,’ says Green. ‘It is about developing the watch function further, and the donate buttons and optimising for different social platforms. Where do you stand between Instagram, Snapchat and Youtube? How do you optimise the back end in a more strategic sense.’

Just a decade ago, Beached Az became a sensation on Youtube with numbers that are very low by contemporary terms. It was pumped up and respectablised by the ABC as it built its own online presence. Now, the project has no real ‘home’ at all, beyond the servers. There is no identifiable broadcast base, no particular brand except a whale and a cranky seagull.

Projects like this have become free flowing opportunists, grabbing landing points where they turn up, doing social media deals across the options. It is both a ghost and the realest kind of communication we have.