Kim Dalton, chair of the Asian Animation Summit, is helping to build relationships with our neighbouring screen sectors.
David Tiley 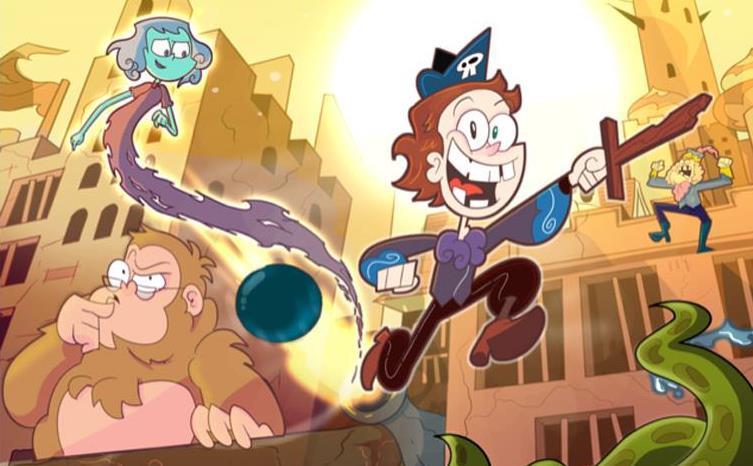 The pitch for Escape from Pirate Asylum won the audience award at the Asian Animation Summit. It was represented by Carmel Travers from Pop Family Entertainment.

‘Go global’ is the cry. Work in the Asian market. Find new broadcasters and streamers.  Easy to say, hard to do, and depressing in the huge markets like MIPTV.

But there is one boutique market in which all this is happening, where we can see how these lofty theories can be road-tested.

The market is the Asian Animation Summit, with 215 delegates, including 18 Australians, which brings all the working parts of the television animation market together at the beginning of December. This year it was in Seoul, and the next two years will be in Indonesia, underwritten by the government.

Besides some seminars on global financing, the three-day program contains 26 presentations to attract finance and sales, including Monster Teddies, Escape from Pirate Asylum and Tiny Tails. This is very much a kids’ TV event.

Patrick Egerton of Cheeky Little  Media has been going since it started eight years ago. ‘Its a relatively small event in terms of the number of attendees but it’s a lot cosier,’ he said. ‘You have such an opportunity to access buyers and commissioners.

‘We generally pitch a project so we can road-test it in front of an audience and get feedback. The larger markets are in Europe and Asia and they give you a certain skew. The Asian Animation Summit shifts your gaze to the Asia Pacific region, and reminds you of the great opportunities.

‘We’re getting to the stage where it is possible to finance and coproduce – or it should be between us and Asia, given the cultural and economic heft of where we are going. It really should be possible.’

According to Kim Dalton, who chairs the supervisory board, ‘The event is financed on a partnership basis, and we have an alliance of agencies from around the region. They all contribute a partnership fee, are involved in setting the Eligibility Guidelines and designing events and, most importantly, selecting projects from their country.’

You can see the agency approach from the titles – The Korean Creative Content Agency, the Indonesian Agency for the Creative Economy, the Thai Department of International Trade Promotion, the Malaysian Digital Economy Corporation and Kidscreen.

The Australian agencies are Screen NSW and Screen Queensland, while Dalton and Tim Brooke-Hunt, once the head of Children’s at the ABC, are deeply involved. The Summit is run by Jocelyn Christie from Brunico, the Canadian company that runs Kidscreen and Wildscreen.

How well does it work?

Dalton is happy with the increasing size and confidence of the market. ‘We get nothing but positive feedback’, he said. ‘The quality of the projects keeps increasing. The level of broadcasters coming back continues to rise.’

But, the realities of financing inside the region are still difficult. ‘It hasn’t resulted in very much direct, inter-regional or regional co-finance of projects that get presented at the summit.’

However, the summit is also attracting major European and US players like broadcasters and animation companies. That means that around 50% of the pitches are ultimately supported, which is a very good metric for a screen market. Dalton argues that the level of connection between regional producers and international broadcasters is very high.

‘What come out of this is a real growth in the relationships between producers in our countries,’ said Dalton. ‘There are now several unofficial coproductions between Malaysian and Korean producers, and we have strong relationships linking Australia and Malaysia.’

Carmel Travers from Pop Family Entertainment has been going since the first summit, but this year was the first time she pitched. Escape from Pirate Island won the Best in Show Award. ‘It is a fantasy world, but in the end you are just talking about genuine relationships between kids. They need real friends and relationships and genuine warmth. The show is conceived with kindness and concern.

‘The content obviously resonated with buyers, who reached out and so we are following through. It is not a lay-down-misere, nothing is in this industry, but it is encouraging to know we made kids laugh,’ she said. ‘It has just come together easily because it is straight comedy.’

Travers has already worked with Malaysian animation companies several times. ‘A lot of Asian companies have been in the animation game for decades,’ she said. They are very skilled and can be great partners. Nothing is impossible in partnerships, which can come from anywhere and that is a good thing in children’s entertainment.’

Across the year, participating producers can use a mentoring service run by the summit. Tim Brooke-Hunt travels the capitals of Asia a week at a time, providing face to face support to develop pitches. As Dalton explained, ‘The feedback we get from producers and from the agencies is extremely positive. It has a real impact on the ability or the capacity of producers around the region to prepare their projects for presentation at an international forum such as this.’

Pitching is a useful development tool because it engages an audience and helps creators to bring the inner narrative to the surface. In this context, it allows producers to work through the particular issues of developing a cross-cultural market place across the barriers in our region.

It is a distinctive market, as politics and nationalisms collide and media businesses learn to play the complex game of global deals. As Egerton said, ‘For Asians Netflix is a massive opportunity as it tries to resonate with certain parts of Asia. But the results have been patchy, as producers haven’t had local networks to commission kids’ content at a high level of quality and still tell local stories.’

So they are liberated by the possibilities but faced by a steep learning curve. However, this market is almost unique in the value of locally generated intellectual property. ‘The possibilities for licensing and merchandise here dwarf content in terms of revenue’, noted Egerton who understands the value of an attractive toy. This was pitched at the summit:

Carmel Travers is also awed by the potential scale of the market. ‘The Asian market is dynamic and growing every year. There’s such a huge population base and they are all tapped into local broadcasters with their unique broadcast and streaming platforms. Countries like Indonesia, Malaysia and Korea have enormous weight as markets with massive populations which are very young as well. The kids are clamouring for content which is often very similar to that which would work in the US and Europe, and we aim at being universally funny.’

As Andy Blazdell, CEO of CelAction in the UK, wrote for Animation Magazine, ‘One of the most insightful comments of the Summit came from Olivier Dumont, President of Family & Brands at eOne, who said that linear TV ‘ignites brands’ – a good takeaway for producers looking to be the next worldwide phenomenon.’

‘Cultural barriers are all part of the learning curve,’ said Egerton, ‘and for Asian producers as well. We are trying to find content that works across multiple territories while large streaming corporations are trying to localise as well. There are two strategies at play.’

Kim Dalton has been tracking these ideas. ‘That doesn’t mean to say there’s an internationalisation of content going on. All of the major players are increasingly becoming aware of local audiences, and coming up with content that speaks to them but deals with universal themes.

‘People from Disney and Nickelodeon and the ABC all say they are interested in local stories, local characters and local series.’

So the Asian Animation Summit turned out to be yet another stage for the idea of going local to attract international audiences. The pendulum is definitely swinging.