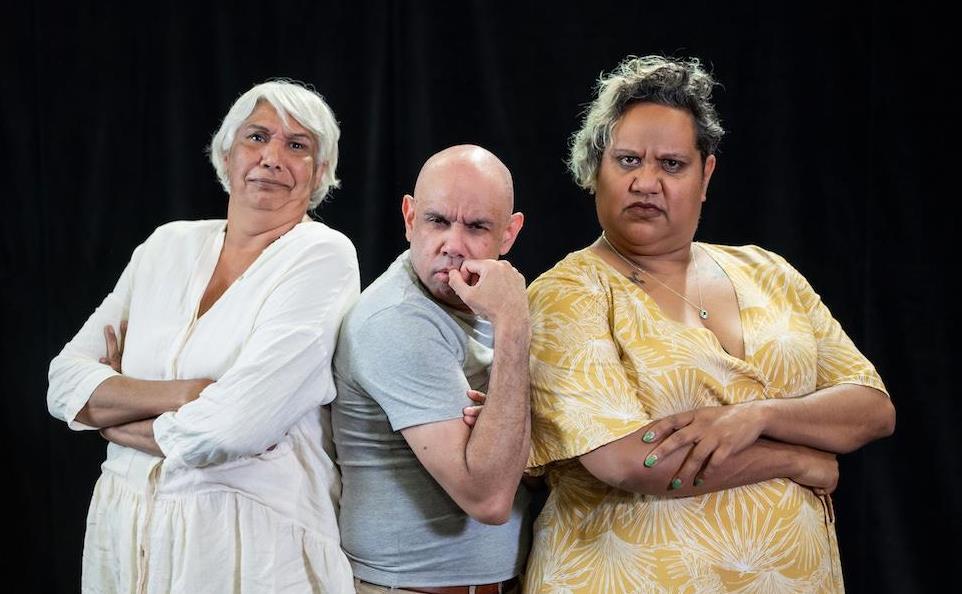 Is it even possible to make comedy out of the Aboriginal experience of Australian colonisation?

I ask this question to Trisha Morton-Thomas, and she laughs down the line from Alice Springs where she lives and works with her production company Brindle Films.

‘You tell me! You’ve watched the show. What do you reckon?’

She’s talking about History Bites Back, a one-hour presenter-led comedy special addressing white Australia’s ignorance around Aboriginal people and social security, citizenship, equal wages, nuclear testing and civil actions. Using real life social media comments collected around the 26th of January (‘Australia Day’ for some, or, ‘the worst day of all’ according to Morton-Thomas), the show corrects misconceptions by offering real historical facts. These are delivered through animation, comic re-enactments (with performers including Steven Oliver and Elaine Crombie), as well lots of straight out soap-box oration from the visibly furious Morton-Thomas.

An Anmatyerr woman from Central Australia, she is the presenter of the show and also but co-writer, producer and co-director with Craig Anderson (Black Comedy, Occupation: Native). With over 25 years experience in broadcasting, journalism and media, Morton-Thomas was one of the first CAAMA alumni (along with Rachel Perkins, Erica Glynn and Warwick Thornton). She’s been a commissioning editor at NITV as well as a recognisable film and theatre actor, from her first professional role in Radiance (1997) to Redfern Now, and Total Control (where she steals the scene as Deb Mailman’s tough no-nonsense mother).

Morton-Thomas’s work as writer and producer includes the 2017 documentary Occupation Native, where she looked at her mother’s birth certificate and found that terrible descriptor written on the form. She sees the new project as a kind of continuation of the work started she there.

Is History Bites Back funny? Yes, in a very black (Blak?) way, but mostly it’s educational, with a brisk and bewildered tone that doesn’t pretend things are okay in Australia, especially on social media where our worst impulses and deepest ignorance is revealed.

‘You have to have a very dark humour to survive,’ says Morton-Thomas. ‘Almost every project I’ve worked on I’ve had to work through the death of a very close family member. It’s kind of “normal” in a terrible way. On a drama series I was working on recently with four or five Aboriginal people, in the six to eight weeks that we were working, almost every one of them lost at least two or three family members. That’s what we’re dealing with.’

In the director’s notes for History Bites Back, she spells it out in a way that’s worth reprinting here:

Development and Filming was particularly painful and heart wrenching for me. Two nephews suicided while we were still writing. I watched my aunt pass away days before we commenced filming, then on the first day of principle photography, I learnt my sister had terminal cancer and was in palliative care and I was also helping my cousin organise her mother’s funeral between scenes and yet it was ‘normal’ to me and most of the Indigenous cast and crew on this doco. I felt the injustice of this ‘normal’ and it is reflected in the tone of History Bites Back. In essence I was wrung out and worn thin by what was essentially a decade long, endless waves of loss and grieving in my family as well as feeling hampered by appeasing ‘Australian Sensitivities’ in representing authentic Indigenous voices and experiences on screen. I felt disheartened, disillusioned and deeply aggrieved by this country and its long tradition of presenting non-sense and non-truths about Australia’s first peoples and our history – In traditional media and now especially in online Social Media. ignoring the well-rehearsed, worn and generational put downs by clueless Australians with no understanding of history and its social impact on Aboriginals, is the rational thing to do – But I’m only human and often the strain of the constant, ongoing and unjust vilification of Indigenous peoples, barbs painfully deep.

To put it mildly, she was ‘not in a good place during filming. I was very angry at the lack of importance placed on Indigenous lives at times.’

‘I was wrung out and worn thin by what was essentially a decade long, endless waves of loss and grieving in my family as well as feeling hampered by appeasing ‘Australian Sensitivities’ in representing authentic Indigenous voices and experiences on screen.’

Expressing this anger was not the only motivation for the show. She wanted to dig deeper into history and also bring truths to light in way that was not like the ‘boring, faceless, and overly sincere docos that often populate Indigenous issues.’ That was a tricky balance to achieve. ‘Every time you think you know how bad it was, you really don’t know anything.The more you dig the more you realise it’s actually a hell of a lot dirtier and more brutal than any of us could imagine.’

Tasked with bringing the comedic elements into the history was co-director and co-writer Craig Anderson, who had also worked with Moreton-Thomas on Occupation: Native, as well as ensemble comedies Double the Fist and Black Comedy.

In an email to Screenhub, Anderson says, ‘Trisha is a keeper of stories, and a holder of knowledge. Writing with her is a hell of a ride because she fires up about so many issues, and I attempt to scribe. I learn a lot, and she lets me ask a lot of dumb questions that a guy who grew up in Western Sydney needs to ask. On set, Trisha trusts me to push the story into the world in an entertaining and (appropriately) humorous way.’

Who’s the show for? Anderson writes, ‘If you have a heart and aren’t a proud contrarian, then History Bites Back will help you understand a unique P.O.V. on foreign settlement and daily struggle. You might even laugh along the way. However, if you think you’re right and know everything there is to know about Indigenous issues, then you’re going to totally love yelling at the screen and commenting on-line afterwards.’

As for what Morton-Thomas will be doing on Sunday night when the show premieres on telly: ‘I’d like to say I’d be tuning in, but on the weekends I like to go out back to sit on our homelands. There’s no internet there. I like to just stay connected to Country.’

History Bites Back premieres on NITV and SBS Viceland on Sunday 11 July, at the conclusion of NAIDOC Week.