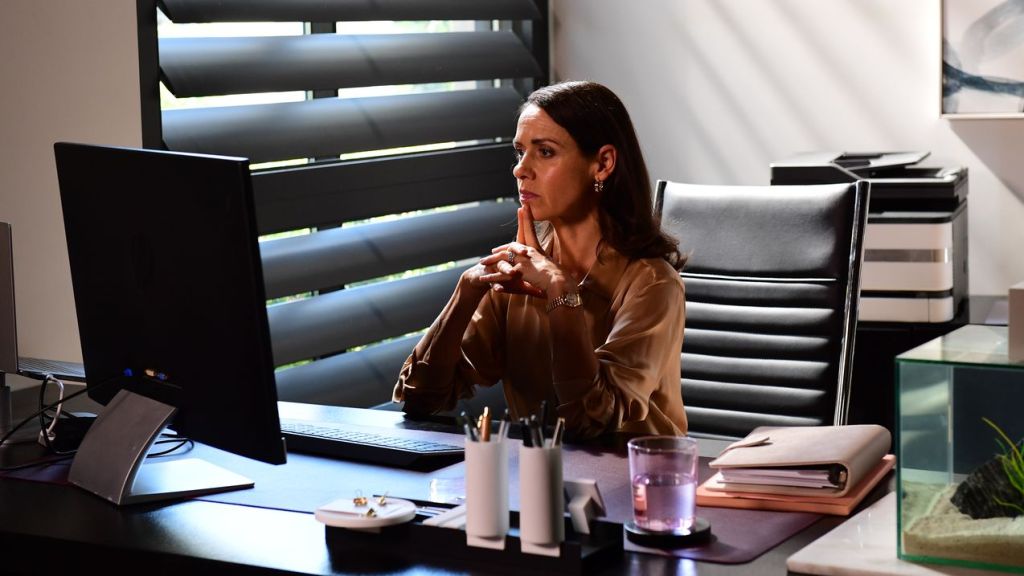 The popular crime series exposes its underbelly for the first time since 2018. Image: Nine Network.

Melissa Caddick, the Sydney con-artist who ran a ponzi scheme that stole around $40 million from friends, family and various monied residents of the city’s eastern suburbs, probably wouldn’t have been a blip on the public’s radar if not for her foot. Months after she vanished from her million-dollar home, leaving behind her son, her lover, her family, and a lot of angry clients, her shoe was washed up on a beach hundreds of kilometres south of Sydney – with her foot still inside.

For some, it was conclusive proof Caddick had jumped to her death; for others, a foot was exactly the kind of body part a desperate woman would hack off to fake her own death. And as a result of that uncertainty, we now have Underbelly: Vanishing Act.

When Underbelly first made its debut back in 2008, its take on a string of Melbourne underworld murders was gripping viewing – for the first few episodes at least. The various spin-offs and sequels that followed, travelling the country and various time periods, often started strong then fizzled out, much like the careers of the crims they were glorifying.

Vanishing Act, the first instalment in the series since 2018’s uninspired Underbelly Files: Chopper doesn’t have that problem. The most interesting part of Caddick’s story is how it ends. Unfortunately, getting there is somewhat less than half the fun.

After opening with the found foot, we’re introduced to Vanishing Act’s version of Caddick (played by Wentworth’s Kate Atkinson), a superficially charming money manager always on the lookout for new clients. As we already know, her constant hustle is because she’s running a ponzi scheme, and without a constant source of new money it’ll all fall apart.

Don’t know what a ponzi scheme is? Vanishing Act has you covered: basically, it’s a pyramid scheme run by financial advisors – you take the money from new clients and use it to pay out the old clients so they keep on investing, while you get rich from your cut. It works great until you run out of other people’s money.

Making someone who set out to rip off almost everyone she knew likable is a tall order, but this makes a few half-hearted attempts early on. She’s not obviously ripping off bestie Angie (Maya Strange); when we meet clueless pool cleaner Nash (Dylan Hare) it seems Caddick values him not for his cash, but his rich list of clients.

And then it’s revealed that she actually is ripping him off, and Angie has invested with her as well, and she also has a toyboy boyfriend named Anthony (Jerome Velinsky) who’s a hairdresser-slash-DJ and by the time they’re doing the now-traditional Underbelly slo-mo dancing to abrasive dance music scene it’s clear that she is in fact an unrepentant villain.

In contrast, Anthony is constantly shown as kind, loving, and a perfect partner who’s only sin was possibly being a little dim. It seems safe to say the real Anthony has nothing to be angry about here … in contrast to some of the characters in Seven’s recent Australian Gangster, which was repeatedly delayed by legal threats.

Aired in two 90-minute blocks but clearly designed as three one-hour episodes, the first hour sets up Caddick, her scam and the hard-partying lifestyle it funded, plus the people in her orbit she preyed on until some bad luck – a major client wanted out; another discovered her licence to operate was fraudulent – helped ASIC close in.

The second hour sees ASIC, led by Phoebe Quinn (Ursula Mills), taking everything that isn’t nailed down out of Caddick’s house, while flashbacks fill in a few blanks that don’t really need filling in. Yes, it’s interesting that she ran off at 22 with a man she knew (thanks to her parents snooping) was a con man; he took everything from her, lesson learnt. And her marriage to a UK labourer who became a lawyer adds a bit of depth, largely because it reveals her to be a person who takes what she wants – in this case, dirty weekends with her hairdresser, and when she was found out she took everything from her UK house and moved back to Australia.

The big problem with this series is that once you get past the severed foot there’s just not that much to work with. Things are lightly fictionalised with the arrival of ‘rich guy’ George (Colin Friels), who turns out to be a crim looking to launder a lot of cash, but in mostly sticking to known facts this ends up being little more than an extended character study of an unpleasant person whose motivations are basically ‘I like nice things’ and ‘other people are suckers’.

The refusal to go big or go crazy – even the third hour, which does speculate a little more about what happened after Caddick vanished, keeps its feet firmly on the ground (pun intended) – puts all the weight of making this somewhat plodding series watchable on Atkinson’s shoulders. To her credit, and despite a number of scenes that require her to just look pissed-off into the camera, she pulls it off.

Her version of Caddick is totally plausible whether she’s coming across as a slick money manager, a (mostly) loving mother and only mildly condescending partner, or an utterly soulless void that exists entirely to consume. There may be a lot of stunning Sydney harbourside views on display here as Caddick constantly runs past the cliffs at The Gap where she (possibly) leapt to her death, but it’s Atkinson who’s the most watchable thing in Underbelly: Vanishing Act.

A Screentime Production for the Nine Network