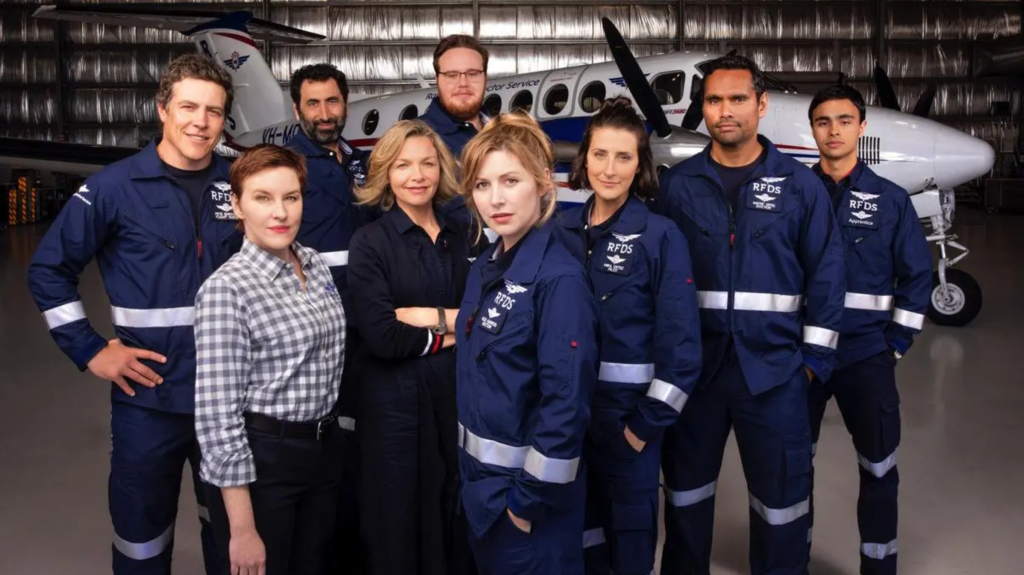 The cast of RFDS, courtesy Seven.

The biggest surprise about RFDS: Royal Flying Doctor Service is that it’s taken so long for a return flight. Back in the 80s and early 90s, Nine’s The Flying Doctors ran for over 200 episodes. With a sure-fire mix of soapy plots and stunning scenery, it was shown around the world. This spiritual successor, based on true stories from the real RFDS, has already been sold to PBS in the USA, Channel 4 in the UK, and a raft of networks across Europe. But in 2021 a successful drama needs more than shaky sets and stock footage of a plane flying over the outback. Does a new generation of flying doctors have what it takes?

Thankfully the short answer is yes, though this series is more about cutting into patients than cutting-edge drama. A tightly scripted eight-part series (though presumably there’ll be more if it does well), this is well-made across the board, with few of the obvious scripting flaws that often derail local productions. It’s not ground-breaking television by any stretch, but – much like the patients of the RFDS – you’ll find yourself in safe hands.

Read: TV Review: Rosehaven S5 is a Tassie holiday away with good friends

There’s barely time to meet UK doctor Eliza Harrod (Emma Hamilton) before she’s fled London for the dusty tarmac of the Broken Hill RFDS. Two minutes in and she’s meeting her new team, and not long after that she’s in the air and on her way to her first case. A few jokes about balancing staying hydrated with the lack of outback toilets aside, this could almost be a reality series, complete with jargon-heavy dialogue (why say ‘broken leg’ when you can first say ‘Fractured tib fib) and a mid-air turn for the worse that ends up as a slightly gory attempt to relieve pressure on the brain using some handy power tools.

It’s a solid start, and the first episode doesn’t fumble the ball once the character drama kicks in. There are a few conflicts set up early – fellow doctor Wayne Yates (Rob Collins) wanted the job Eliza got, while a possible romance with Flight Nurse Pete Emerson (Stephen Peacocke) is derailed by a personal tragedy – but refreshingly neither turns into overt animosity. Everyone here is a professional, which makes everyone likeable, even though some characters – looking at you, Base Manager Leonie Smith (Justine Clarke) – don’t get much to do past picking pollen off flowers.

A range of family relationships are set up to provide future conflict, with both Yates and Emerson dealing with teens who aren’t so much troubled as disconnected from their elders. Meanwhile, Eliza has a son of her own, Darren (Thomas Weatherall), who is maintaining a connection with his father that he’s keeping covert. You can’t blame him: according to a story on a fictional website The Gossip Daily, titled ‘Surgical power couple rumoured to split amid husband’s exposed sex scandal’, Eliza had a pretty good reason for running half way around the world.

RFDS doesn’t skimp on the medical issue of the week either, with episode two featuring an outback astronomer with mysterious bruises, seizures, and a possible case of scurvy. With plenty of jargon and slickly professional medical procedures, it has, as the old advertising slogan used to say, ‘the look and feel of real’; these days a medical drama can’t get away with anything less.

If Australia wants to be a player when it comes to international drama, this is exactly the kind of series we need to be making.

No doubt the outback will be a big selling point for overseas viewers, but even local audiences will appreciate the skilful use of the Broken Hill setting. A pub party welcome for Eliza plays up the Priscilla drag connection, Eliza’s suite at the hotel has the look of an authentic old pub’s residential quarters, and a few evening scenes really nail the late night isolation of a small-ish country town.

If Australia wants to be a player when it comes to international drama, this is exactly the kind of series we need to be making. It may not be flashy, but it gets the basics right and then builds on them just enough to create a well-rounded drama that doesn’t put a foot wrong. If it never quite soars, this remains an impressive take-off.

Eight one-hour episodes screening from Wednesday 11 August at 8.40pm on Seven and 7Plus.