Told through songlines and stories, this response to the colonial celebration of Captain Cook is passionate and affirming, writes First Nations author and poet Vika Mana.
Vika Mana 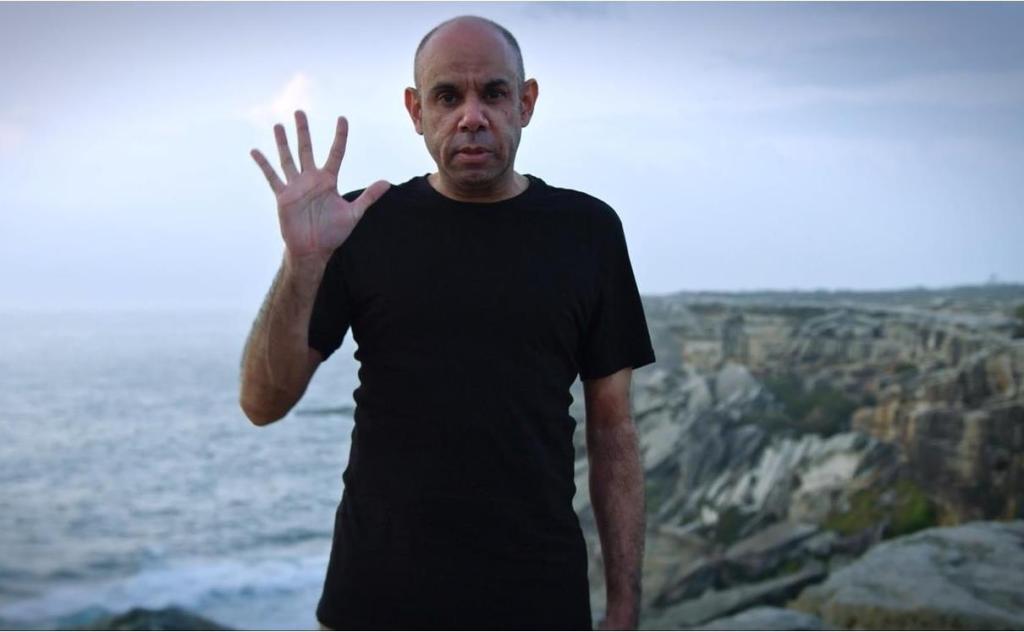 It’s always a good time when comedian, poet and playwright Steven Oliver is on the screen, and he doesn’t disappoint as co-writer and host of Indigenous documentary Looky Looky, Here Comes Cooky. 2020 is the year that marks the 250th anniversary of Captain James Cook’s ‘discovery’ and first landing in Australia. With sass, unapologetic Black humour and moments of spoken word poetry, Oliver helps guide a narrative that exposes the entire truth behind this anniversary. And, Goodways, Captain Cook isn’t as deadly as white Australia likes to portray him. Darnt.

Looky Looky Here Comes Cooky is composed of a collection of ‘modern songlines’ that inform viewers about Indigenous history and our truths. It prioritises Indigenous truth-telling, instead of following the structures and conventions of colonial ways of sharing and understanding stories or histories.

Directed by Steven McGregor (co-writer of Sweet Country and director of the ABC’s Black Comedy series), the documentary features music producer Daniel Rankine P.K.A. Trials (founding member of A.B. Original), along with rapper Birdz, and singer/songwriters Mo’Ju, Alice Skye, Kev Carmody, Fred Leone and Mau Power. Diverse in their backgrounds and chosen genres, all are talented Indigenous storytellers in their own right, telling their individual stories in different ways, and sometimes in different languages.

Each of their songs lead viewers to another history lesson, and another point in time, thus bringing our perspectives to the forefront and never invalidating them by prioritising non-Black voices. This was affirming, to see my people, from every corner, tell our truths, in ways we understand. We were never interrupted here either, and there’s something powerful in allowing Black people speak their minds without restriction. It’s almost a healing experience; to have our truths illustrated with no colonial constraints.

This was affirming, to see my people, from every corner, tell our truths, in ways we understand.

It is hard to look away, it is impossible not to acknowledge the stark histories and traumatic experiences these storytellers sing and rap about. It is comforting also to know that these artists are loud, defiant, and staunch in what they share and how they share it. Together they illustrate the beauty of Black resistance and the undying generational love we have for Country, kinship and for our ancestors. These songs, stories and histories are woven together with a punch and a laugh or two. This is Aboriginal and Torres Strait Islanders truthtelling and leaving no rock unturned.

It’s 2020, a year that suggests clarity, and Looky Looky, Here Comes Cooky provides exactly that. Oliver interviews many elders and prominent community members across Australia who refuse to shy away from telling their truths, the facts and stories that were passed down to them. We learn about the lies the colony spread, and the histories not taught in official curriculum. We learn about the names we’ve never heard of, names not given the same admiration as Captain Cook by white Australia.

We learn that there are many things named after Cook, from Cooktown, to Cook statues, Cook hotels and streets and roads, and even a Cook University. And yet, the history about Cook isn’t shared in its entirety, and this in itself, is quite cooked! We learn from Kev Carmody, a musician descended from Bundjulung and Lama nations, about how Captain Cook used colonialism, capitalism and Christianity to erase us and deny our existence. Waubin Aken, traditional owner from Kaurareg nation, adds to this, debunking Captain Cook’s claim of walking on his country and putting the English flag in the sand. Little does white Australia know (as Waubin explains), that his people were using smoke signals – or Blackfella internet, he calls it – to warn his people that boats were coming. Warriors were ready for Captain Cook, and for that reason, he decided to sail away. Stories like these are woven into the documentary and are just as staunch as their storytellers. It is important to listen to these stories because they are never prioritised in Australia’s history.

This was a delightful journey for me, from me cracking at the jokes that never stop coming, to sitting in silence and listening, deeply to what our old people had to say, share and teach. I am in awe of the strength of my people, and even when I am tired and exhausted, I remember we are sovereign and how much our old people have resisted and it keeps me going; their resilience allows me to stand my ground. This documentary has allowed me to stand my ground.

Just before the credits roll out, singer Fred Leone’s voice echoes as the documentary comes to the end, as landscapes stretch themselves onto the screen, from the various greens that colour the thick bush and bountiful hills, to the busy concrete jungles of cities with their stagnant dull hues. And lastly, to the beautiful endless oceans, with Oliver standing still on the edges of cliffs, watching viewers from afar. The film operates as a reminder that all land, on this continent made up of many countries, is stolen land, and that this land, no matter where you stand, holds our histories; you just have to be willing to listen, to learn.

The film is available on SBS on Demand.

Looky Looky Here Comes Cooky premiered at the Melbourne International Film Festival on 16 August and will be simulcast on NITV and SBS Viceland on Thursday 20 August at 8.30pm. Directly after the premiere on NITV, The Point will further investigate the Cook narrative, in this episode that asks Cook or Crook? Hosts Rachael Hocking and J.P. Janke will explore how Australia can move forward with truth telling as we confront our nation’s often forgotten history, alongside guests Wesley Enoch, Alison Page and Jaky Troy. The Point takes a deep dive on how history could be decolonised and zooms in on the current debate around the vandalism and dismantling of statues of colonial figures.

Meleika Gesa-Fatafehi AKA Vika Mana, is a storyteller from the Zagareb and Dauareb tribes from Mer Island, Torres Strait and Fahefa Tonga. They perform poetry, write criticism, breathe life into worlds and lastly, can share a joke or two, max. That’s because they only know exactly two jokes. In 2019, Meleika won a place in The Next Chapter Scheme awarded by the Wheeler Centre. In 2020, Vika was shortlisted for the Nakata Brophy prize. Vika is also apart of the FAMILI collective, rapping about Afros and abolition.