Men by Alex Garland review: a graphic and menacing horror 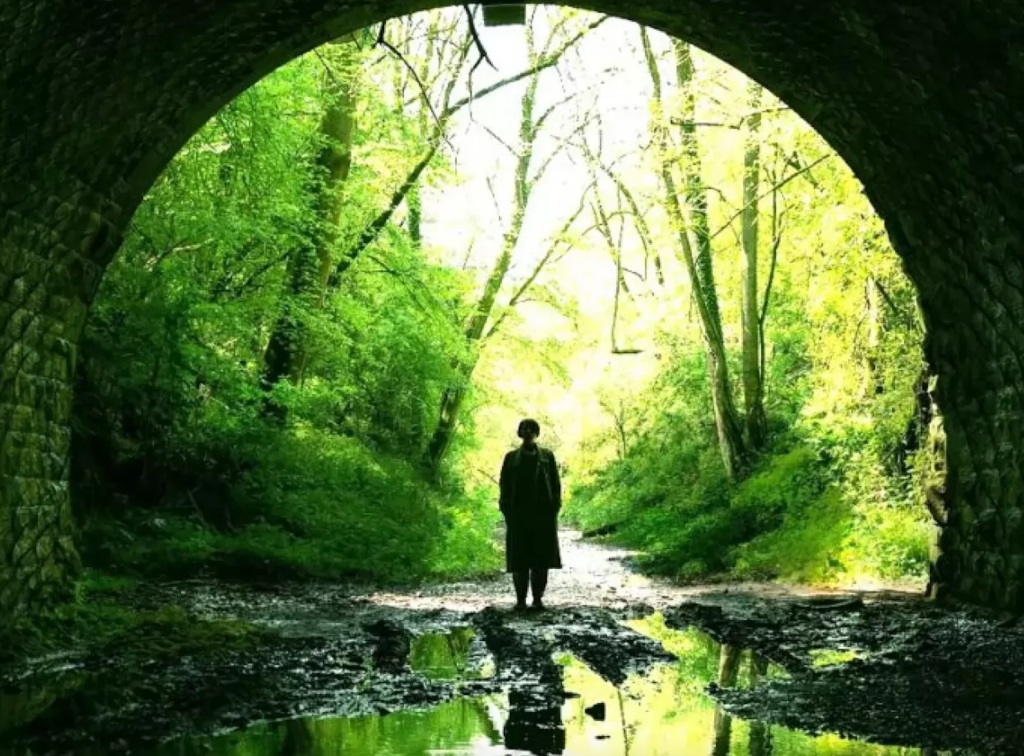 From the moment our protagonist walks into a lush garden, pulls an apple off of the nearest tree branch and takes a large bite – unknowingly watched by an ominous and disapproving male figure nearby – it’s pretty clear where this film is about to go thematically.

Although you probably could have guessed that from the moment you walked into the cinema to see an A24 horror movie titled Men.

Harper (Jessie Buckley) is still processing the graphic and sudden death of her husband (Paapa Essiedu). She takes to the English countryside to find some rest and reflect – but any form of respite is made impossible by the town’s residents, all men, and all portrayed by the same actor (Rory Kinnear).

Kinnear delivers a brilliant range of menacing performances – from the overbearing ‘nice guy’ landlord, to the sexually repressed local vicar, to an angry and violent 10-year-old boy. These characters become all the more haunting as the townsmen begin to descend upon Harper, both figuratively and literally.

It’s the kind of film where it’s difficult to decide what is or isn’t a spoiler, because the film is so abstract. In fact, I’d be tempted to suggest that if you haven’t seen the film, now is a good place to bookmark this article and read the rest of it after you’ve made the jaunt to your local cinema.

‘What the hell did I just watch?’

It’s a fair enough question. Men, in the vain of so many high concept horror movies that have emerged over the past few years, is a deeply interpretative film.

Any sense of a tangible or easy storyline quickly gives way to strong visual metaphor and symbolism. The film’s meaning is as much derived by what the viewer brings to the experience, as it is by what director Alex Garland has put on screen.

There are heavy references to paganism, biblical tales, folklore, and poetry. Strongest is probably the contrast between images of the ‘Green Man’, the symbol of rebirth and man’s primal nature, and images of the Sheela na gig, a naked woman with exaggerated genitalia who holds gaze with whoever is looking upon her.

Garland has been fascinated with the figure of the Green Man and Sheela na gig, explaining in multiple interviews that he’s been trying to find a way to use the character in his films. Both are symbols which appear in many churches across Europe, and whose true meanings have been washed away by centuries of Christianity and moralism. Much like the film itself, their intended symbolism is something that we project meaning onto.

Like many of the most impactful and memorable films out there, this is the type of story that has endless interpretations.

Looking at the reception to this film, I can see comments under Reddit threads and YouTube videos insisting that the anti-patriarchal metaphors are shoved down people’s throats. I’ve also seen commentary that Men doesn’t go far enough in its criticisms and should have been less vague about it.

Depending on how you choose to watch this film, both are valid perspectives.

How does gender affect the experience of Men?

I won’t insult anyone by implying that only women will understand the subtle meanings behind this film. We’re all affected by toxic masculinity, no matter our gender identity/ expression. But there are some things that I imagine might be viewed differently based on the experiences brought to a screening of Men.

I was fortunate enough to watch this film as part of Cinema Nova’s monthly film club screenings, which meant that the film was followed by a dissection of the film’s themes with host Koko and guest Emma Westwood – a horror connoisseur, writer and film historian.

Having a moment to break down the film in depth with two experts who were women, while still reeling from what we had just watched, was cathartic to say the least. Both hosts have seen the film multiple times prior. ‘When I rode my bike home, all I could see was Rory Kinnear’s face on every man’s face down the street,’ Koko said, laughing.

But there was something that emerged in conversations with other women at my screening following the talk. We discussed the stomach drop moments of watching Harper walk headlong into a dark tunnel with seemingly little concern for what might be waiting in there. It brings to mind conversations with our mothers, learning to hold our keys between our knuckles even in the middle of the day.

We talked about the size of the house she’d chosen to stay in, and the decision to be there alone. We made mental notes of the number of entry points in the house, we gasped as she made the decision to run through this strange male-dominated town in the dark.

We sighed as Geoffrey repeatedly refused to pick up on social cues that Harper was clearly wanting to be alone. And while everyone can suffer from toxic manipulation in relationships, regardless of gender, it is staggering the number of women who have been told that they need to stay in a relationship in case the other person chooses to hurt themselves.

While watching this film, I was strongly reminded of Darren Aranofsky’s Mother! (2017) Charlie Kaufman’s I’m Thinking of Ending Things (2020), and even Pablo Larrain’s Spencer (2021) – all psychological thrillers that bend and play with linear chronology and reality to tell the stories of women who are domineered by men, patriarchy and trauma.

Beyond the subject matter and style, these films share something else in common – all written and directed by men. Horror and women’s trauma go hand-and-hand, so in that respect it really isn’t anything new. As Emma Westwood says: ‘They use this term called elevated horror to describe [films like Men] it kind of annoys me to be honest … it’s negating the intelligence of some older horror films.’

But one thing that stood out to me was that Harper is never victimised in this story. How many ‘final girls’ are dismissed by men in their films and then proceed to doubt their own reality? Harper never does, even when her world is spinning out of control.

Many viewers might assume that this film and it’s subject matter have been created in response to the #MeToo wave of films that are more critical of male power, or the subsequent outcry of #NotAllMen that most of us have had to witness in response.

But in several interviews, Garland has stated that this film has been in development for more than 15 years. Not only that, but this is hardly his first foray into this subject – his other major films, including Annihilation (2018) and Ex Machina (2014), centre women and the consequences of the male world around them, including, in the case of Men, birth.

‘When I showed images of birth, it was fascinating to see the horrified way people reacted to them because they involve things like blood and stretched parts of bodies,’ explained Garland in a interview with Salon. ‘It is interesting the way in which something – which is actually standard, not just fundamental – is so provocative to people.”

Leda and the Swan

In a particularly confronting scene, the Priest quotes a poem to Harper which stayed with me after the film and I looked up later on. It’s a poem by WB Yeats titled Leda and the Swan which describes the Greek mythology story of Leda’s rape by Zeus, who had shape-shifted into a swan. This assault results in the birth of Helen of Troy, the woman who supposedly caused the fabled Trojan War:

How can those terrified vague fingers push
The feathered glory from her loosening thighs?
And how can body, laid in that white rush,
But feel the strange heart beating where it lies?

A shudder in the loins engenders there
The broken wall, the burning roof and tower
And Agamemnon dead.
Being so caught up,
So mastered by the brute blood of the air,
Did she put on his knowledge with his power
Before the indifferent beak could let her drop?

This stood out to me because the Trojan war myth is lined with misplaced blame towards women: from Leda giving birth to Helen, to Helen launching the ‘thousand ships’, to King Agamemnon slaughtering his daughter in sacrifice for ‘good weather’, to the King’s wife Clytemnestra killing her husband in revenge for murdering her child. All the while, the ones responsible for this war and trauma are actually men such as Agamemnon and Zeus.

That poem is to me the perfect metaphor of this film: it’s graphic, off-putting, and almost raises more questions than it seeks to answer, with themes of guilt, hopelessness and blame – and yet it’s unclear where Yates is directing his blame or what his intention is in the final sentence.

When Harper asks the Priest, ‘What are you?, he replies with black eyes: ‘I am a swan.’

Men is in cinemas now.