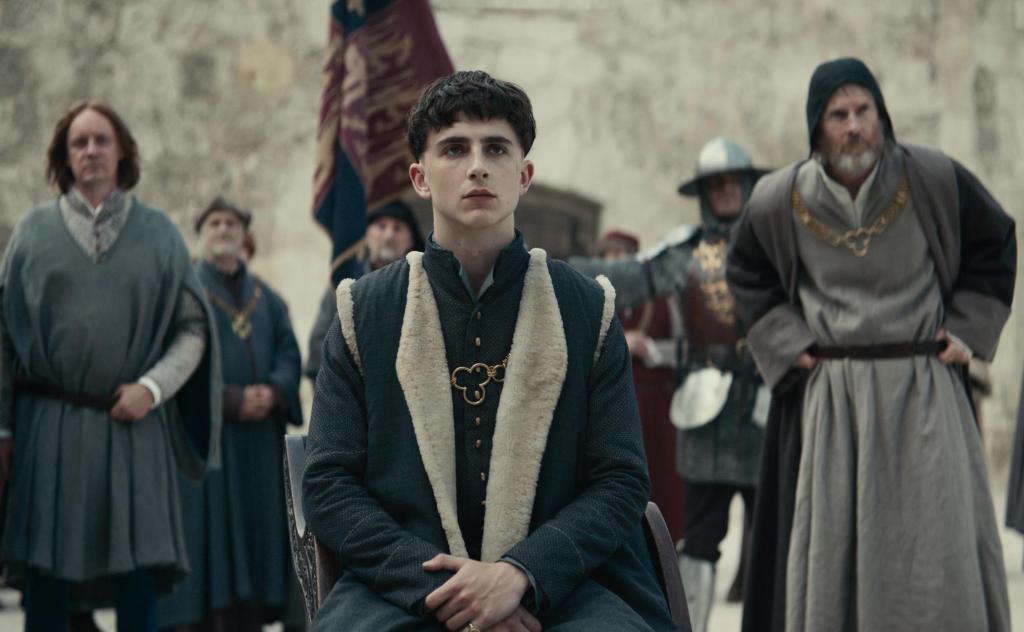 Cinematic takes on Shakespeare that ditch the Bard’s florid prose are increasingly common, keeping the stories alive while stripping them of the language that’s made them endure. In the case of David Michôd’s The King – written by Michôd and Joel Edgerton and loosely based on Shakespeare’s Henriad – that should be a minor issue. The real world rise of the man who would be Henry V is a compelling story on its own. But there has to be something there to replace Shakespeare’s access to the characters’ souls. Too often this struggles to access those depths.

Henry IV (Ben Mendelsohn) is a king who holds a grudge. Under his rule England is at war with both Scotland and Wales. Eldest son Hal (Timothée Chalamet) is too busy drinking and whoring to care – until suddenly he turns up on a battlefield to save his younger brother (and his army) by challenging the enemy leader to single combat. So Hal has a heart, and he cares for the people he doesn’t really want to rule, and he’s handy in a fight, all of which is good to know as despite seemingly everyone’s wishes he ends up rapidly ascending to the throne.

This doesn’t shy away from gore (heads definitely roll), but neither does it revel in it; war here – and there’s a lot more war to come – is relentless and ugly without ever becoming thrilling. The harsh nature of combat is a lesson hammered home by Hal’s frequently hammered friend Sir Falstaff (Edgerton), a party guy whose serious side comes to the fore when he’s called up to be the king’s right-hand man when a serious of dubious events leads to war with France.

There are regular gestures towards being a character study, digging into the way that becoming king changes our drunken, kindly hero into a ruthless leader. But it’s erratically expressed; Hal’s darker commands are initially countermanded by Falstaff saying “you’re not that man”, and yet Hal keeps giving the same orders until Falstaff is out of the picture and they’re carried out. Perhaps the point is that when you become king you stop changing as a person – you just keep giving orders until someone obeys.

If Chalamet’s performance were stronger – or less focused on his model good looks – perhaps this wouldn’t matter. Early on we’re repeatedly told that Hal is a stinking, drunken mess. It probably would have helped if make-up and costuming had noted that so they could dirty him up for those scenes instead of having him barely register on the rock star scale of dissolute appearances. Then again, if he’d looked really bad then we wouldn’t have known the burden of leadership was weighing upon him later on, as some bags under his eyes are pretty much the only signs we get of that.

None of The King’s flaws are serious enough to sink it, and often it hits the sweet spot between glossing over the mud and blood of times past and over-the-top revelling in it thanks to cinematographer Adam Arkapaw’s muted colour scheme and Jane Petrie’s restrained costume design. But a film where Edgerton is hamming it up, Chalamet is broodingly pouting all over the place and a startling Robert Pattinson is gnawing on the scenery as a foppish blonde French princeling should be a bit more fun – or simply more epic – than this proves to be. The march across France to Agincourt that takes up the final third at times feels like it’s happening in real time. At least Shakespeare sprinkled in a few stirring speeches.