Film: The Irishman revives a chequered past

Scorsese's latest is a paradoxical object – and not just because of its digitally de-aged cast, writes Adrian Martin.
Adrian Martin 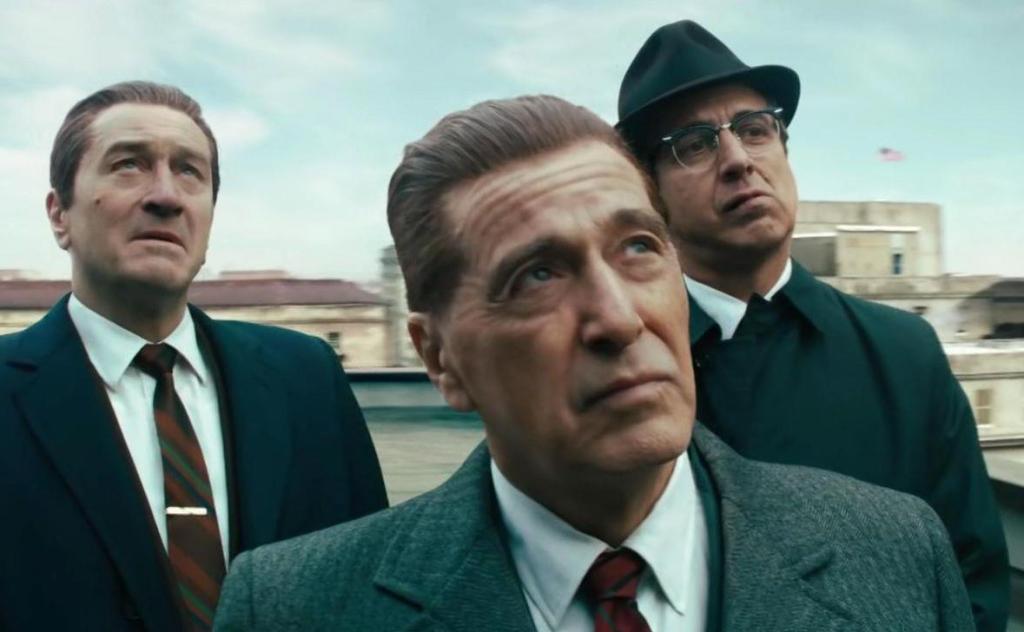 Looking up, or looking back at a legacy? The Irishman, courtesy Netflix.

There are certain passages in The Irishman – relatively rare passages, given the famous powerhouse style of director Martin Scorsese – when events start to fly, bridging space and time, Thelma Schoonmaker’s editing clicking over in strict rhythm with the accompanying song tracks. These bravura montage sequences tend to exhibit the same plot function they served in Goodfellas (1990) or Casino (1995): they show a parade of mobsters and their hapless citizen assistants getting inexorably “whacked”, one by one, in diverse public and private places. It’s the law of crime, of money, of politics and power as dramatised in a large part of the director’s filmography: everyone is fated to fall.

In a moment of distraction while watching one of this these flipbook-like sequences in The Irishman, I idly wondered: don’t these expert hired killers in high-tension action movies ever get caught in traffic, or pause to take a piss? As if he had read my mind, Scorsese proceeded to deliver amply on these contrarian musings. Everyday situations of driving end up constituting much of the incidental texture and even the central, motivating story mechanism here – especially when the aggressive Tony Provenzano (Stephen Graham) shows up late for his meeting with legendary Teamsters head, Jimmy Hoffa (Al Pacino). And as for toilet stops, the Irishman himself, Frank Sheeran (Robert De Niro), informs us that, in carrying out a hit such as the one he performs on Joe Gallo (Sebastian Maniscalco), which recalls the finale of TV’s The Sopranos, it is wise to first visit the bathroom – both to check out whoever might be lurking there, and to ‘get comfortable’ before carrying out the designated murderous deed.

Such mundane details of irritation or comfort are central to The Irishman for one very good reason: this is not a film about the glamorous life of crime. Sheeran is not the type of guy who goes for the druggy highs enjoyed by Henry Hill (Ray Liotta) in Goodfellas, nor even the fleeting brush with Las Vegas wealth and showbiz royalty that lures ‘Ace’ Rosenthal (De Niro) in Casino. Scorsese has often dramatised heroes (or anti-heroes, it’s hard to tell them apart) who plummet overnight from the heights of lived fantasy to sudden ‘schmuckdom’, becoming average nobodies who must eke out their last days in the anonymity of suburbia. Right from his origins, however, Sheeran is much closer in temperament to that type of ordinary civilian. As he did in the army, Sheeran follows orders (to kill), pays his respects, stays in line and respects his elders – even when the time comes that he must choose between those elders, and pledge his ultimate loyalty. Sheeran, in short, is not a typically “driven” Scorsese hero. Hoffa runs on hubris and others around him grab for power, but Sheeran mainly wants to keep the peace of the unstable ‘system’ that he’s in, and maintain his own family life – two goals that grow increasingly difficult as the years proceed.

When the central characters of Goodfellas and Casino fell, they felt peeved or puzzled, not easily able to adjust to ordinary life without the previous overflows of cash, pills or sex. Sheeran faces a different and more protracted “final act”. He has to struggle with guilt, the possibility of remorse (which he finds hard to feel), and the difficulty of any clean redemption or “closure” – in his lonely, invalid room, he literally likes to leave a door open in the vain hope that his daughter, Peggy (played at various ages by Anna Paquin and Lucy Gallina), will one day again speak to him. Sheeran’s parental problem links up to a larger thematic structure of ‘family ties’ – just as Sheeran has two father-figures, Hoffa and the benevolent Russell Bufalino (Joe Pesci in a stunning return to the screen), Peggy has two fathers, her own (who she rejects for his violence) and Hoffa (who she ‘misrecognises’ as a completely nice, loving, playful guy). As sometimes occurs in Scorsese’s cinema, other family members – wives, the kids aside from Peggy – tend to disappear into a fuzzy background, becoming virtually interchangeable. On all these points, The Irishman makes for a fascinating comparison with Marco Bellocchio’s remarkable Mafia portrait, The Traitor (2019) – as well as, on a more homely level of criminality, Clint Eastwood’s The Mule (2018).

Scorsese’s characteristic cinematic style, too, gears down for this essentially melancholic tale – in an echo of another epic crime chronicle starring De Niro and utilising elements of the mystery of Hoffa’s death, Sergio Leone’s masterpiece Once Upon a Time in America (1984). Although there are some bravura camera movements (like the virtuosic opening shot through a nursing home for the elderly) and occasional whip pans in Rodrigo Prieto’s impressive cinematography, transformations of crowded frames into ultra slo-mo frescoes of the grotesque, and the aforementioned montage flurries, Scorsese is generally not out to dazzle here. By subtracting the criminal glamour element, he leeches his own storytelling manner of its frequent pyrotechnical excesses – because he no longer has that attractive, unlawful drive to identify with as a creator, and ally his moves to (on every stylistic level).

In fact, there is a striking inversion at play in the way that Scorsese and his longtime collaborators – including Schoonmaker, composer Robbie Robertson and sound expert Tom Fleischman – have shaped the material of The Irishman. Everything here is pinned to the sound – and especially to voices. Conventional ‘sound overlaps’ between scenes become ghostly murmurs of repeated lines; the popular music tracks form a disquieting, droning, ambient bed underneath all the incessant speaking. Political speeches, whispered conversations, telephone calls (such as the crucial one made by Sheeran to Hoffa’s widow), attempts at talking that get blocked and choked in the throat – it is on this sonic plane that the film is most inventive and expressive.

Arguments rage among American crime historians as to the degree of veracity – or possibly very large fabulation – involved in the real-life Sheeran’s ‘confession’ as recounted in Charles Brandt’s 2004 book I Heard You Paint Houses (those words get a punchy, almost Godardian prominence, twice over, in the chunky graphics of the film, as if to signal an alternative or preferred title option). Screenwriter Steven Zaillian (Schindler’s List) has devised an intriguing ‘framing’ structure in order to suggest that Sheeran’s account is more a fantasy of reconstructed memory (shades again of Sergio Leone) than pure fact: De Niro addresses his narrational soliloquy not to Brandt (who doesn’t figure at all in the movie) but to the phantom camera; the effect is appropriately haunting. For the rest of what unfolds, Zaillian and Scorsese hang the succession of scenes on the connecting thread of a road journey taken by Sheeran, Bufalino and their respective wives – a leisurely scaffolding that allows a concentration on the most quotidian details (such as the problem of smoking in the car), while building inexorably to the most awful crunches and reversals in the tested-loyalty intrigue. Zaillian is also good at sketching the broadest possible socio-political map of the interconnections of criminals, unionists, politicians and showbiz celebrities – at times giddily suggesting an all-encompassing, ultra-explanatory conspiracy theory that embraces not only Hoffa but also Castro and JFK!

The Irishman is, in many respects, a paradoxical object. It feels like a minimalistic, purified, deliberately emptied-out version of a typical Scorsese gangster picture – and yet it cost a fortune to make, as the hundreds of names in the end credits testify. Much of the budget, as is well known, went on the digital ‘de-ageing’ of the key cast members. Scorsese finds himself somewhat caught here between wanting to pay a fond, miracle-worker homage to his faithful male actors (Harvey Keitel, too, has a small but impressive role) – forever young, thanks to cinema! – whilst maintaining the consistency (physical as well as emotional) of their specific roles in this story. The digital techniques – obviously painstakingly applied from frame to frame – produce some curious results: there’s something strange swimming in the eyes of these performers, and the ‘younger’ versions of Pacino and De Niro look absolutely nothing like the still vigorous, lean actors we saw a quarter of a century ago in Michael Mann’s Heat!

In general, though, Scorsese keeps a firm directorial hand on all the levels and elements. Perhaps too firm: one senses that he wasn’t willing to lose a single one of these 209 minutes (in marked contrast – maybe deferred compensation – for the ironclad 167 minutes that Scorsese and Zaillian had to contractually deliver to Miramax for Gangs of New York in 2002). Like many filmmakers in their later years, Scorsese (now 77) seems to have become hyper-aware of fashioning his own “testament” in cinema before fate or misfortune take away any opportunity of him doing so; that tendency was already evident in the solemn Silence (2016), another of his long-nurtured projects.

Beyond the sound and fury of unions and politics, or this or that historic crime wave or law enforcement crackdown, Scorsese is shooting, a bit shakily, for a universal tenor and truth inside the story of The Irishman, in a mode to which he did not aspire at the time of either Mean Streets (1973) or Casino. In the words of Orson Welles’ Citizen Kane (1941), and as the frequent freeze-frame intertitles spelling out the eventual end of characters remind us here, ‘As it must to all men, death came …’.