This Indigenous road-movie musical comedy is the feel-good Australian film of the year.
Richard Watts
[This is archived content and may not display in the originally intended format.] 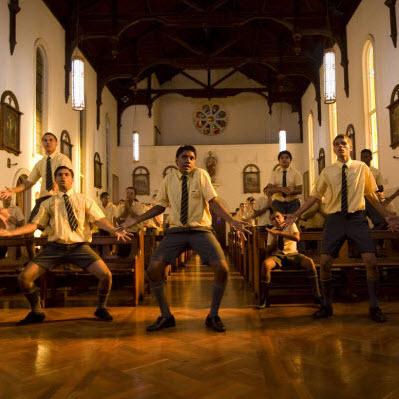 Home, heart, country, family, love and laughter – these are the dynamics which drive the new Australian film Bran Nue Dae.

This energetic, effervescent and spectacularly-lensed production – directed by Rachel Perkins, fresh from the triumph of the SBS TV series First Australians; and featuring an all star cast – is based on the original stage musical by Indigenous Australian Jimmy Chi (whose heritage is also Japanese, Chinese and Scottish) and the band Knuckles – Patrick Duttoo Bin Amat, Garry Gower, Michael Manolis Mavromatis and Stephen Pigram.

Willie’s mother, Theresa (Ningali Lawford-Wolf) wants her son to have more opportunities in life than she had, and so sends him away to boarding school in Perth, in the hope that he will become a priest. But Willie rebels against the paternalistic teachings of Father Benedictus (Academy Award-winner Geoffrey Rush) and runs away from school.

With the help of the liquor-loving larrikin Uncle Tadpole (Ernie Dingo, whose appearance in the original stage musical set him on the path to stardom) and two well-meaning hippies, Annie (Missy Higgins) and Wolfgang (Tom Budge), Willie heads for home, and his beloved Rosie, with Father Benedictus hot on his heels…

The original musical of Bran Nue Dae, which premiered at the Festival of Perth in 1990 and went on to tour the nation, was a groundbreaking piece of theatre; the first such show to be conceived, developed and produced by Aboriginal people. Author Jimmy Chi drew on his own personal history, the unique cross-cultural nature of Broome, and a range of musical styles
to weave together a powerful, uplifting and very entertaining story about Aboriginal life and identity.

While the film lacks some of the punch of the original production, the screenplay – co-written by Perkins and Reg Cribb (Last Train to Freo) – certainly isn’t lacking in spirit.

“Bran Nue Dae comes from a unique place and people in Australia and has something essential to say about life. To laugh, sing and dance are some of our greatest and simplest pleasures. These things are essentially human; they lift our spirits and make us feel good. This is how I felt some 20 years ago when I stood with the rest of the audience and cheered Bran Nue Dae, the stage musical. It is the same feeling we hope to give the cinema audience,” Rachel Perkins observes in the film’s production notes.

Balancing broad comedy with powerful emotion (the later perhaps best typified by the song Listen To The News, set in a police lock-up, in which Willie dreams a poignant and powerful vision of his ancestors) is no easy task, but Perkins does an excellent job of combining the separate elements of the film’s story.

More judicious editing could have tightened the occasionally sluggish nature of one or two scenes, but this fault is easily forgiven in light of the exuberant and inspiring musical numbers produced by David Bridie (Not Drowning, Waving) and choreographed by Stephen Page (Bangarra Dance
Theatre) – in particular the toe-tapping anthem, Nothing I Would Be, Chi’s defiant response to the assimilationist politics of 1960s Australia; which includes the classic line, ‘there’s nothing I would rather be than be an Aborigine and watch you take my precious land away’.

Only 12 of the musical’s 24 original songs have made it to the screen, which may disappoint some early fans of Bran Nue Dae, but the play’s good humour and passion remains intact. The soundtrack also features a number of new songs, recorded by Bridie in a studio on the edge of Broome,
including Rolf Harris’ Six White Boomers and Jessica Mauboy’s cover of the Tammy Wynette classic, Stand By Your Man.

Performances – save for the somewhat bland Rocky McKenzie as Willie – are generally excellent, especially the charismatic Ernie Dingo, and a larger-than-life turn by Deborah Mailman as the seductive Kimberly woman Roxanne (a character that did not appear in the original production, and who is lifted from the play Solid, co-written by Ningali Lawford-Wolf).
Perhaps the most outstanding element of the film is the cinematography by Andrew Lesnie (The Lord of the Rings) which brings the rich colours of the outback to full and vivid life.

Bran Nue Dae is a comic celebration of Indigenous life; a welcome contrast to last year’s grim and gritty though equally excellent Samson and Delilah. Like Richard J. Frankland’s Stone Bros., also released last year, it draws on the unifying power of laughter to unite Indigenous and
non-Indigenous Australians.

Vibrant and delightful, exuberant and uplifting, Bran Nue Dae is hands- down the feel-good Australian film of the year. See it and rejoice.