The government is running a review into the funding and support for the entire creative sector. Is the screen industry engaging with the process?
David Tiley
[This is archived content and may not display in the originally intended format.] 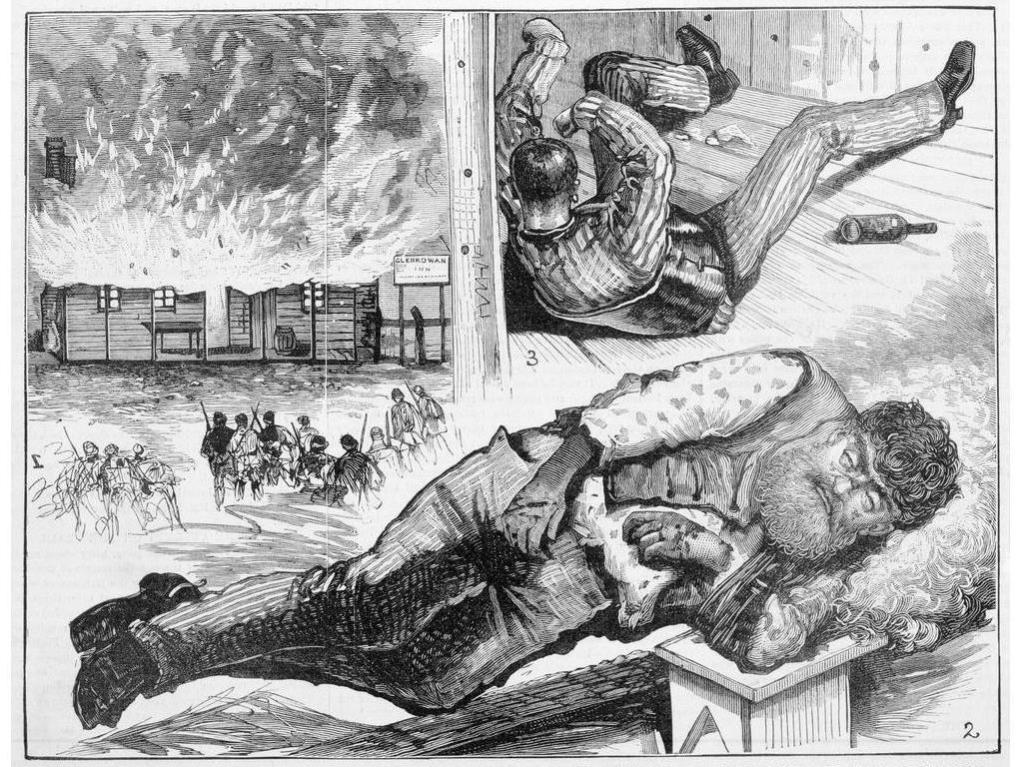 Image:  there’s more to culture than film and television – this newspaper image of the capture of Ned Kelly worked just fine in 1880.

Submissions to the Victorian government’s Creative Victoria enquiry to develop ‘a strategy to increase the public value of the creative industries to Victoria – culturally, socially and economically’ are due by July 17th. One week away.

There have been a host of public discussions and workshops. At the initial event chaired by Film Victoria, a screen industry audience picked at the issues, largely bemused by the need to engage with other forms of public creativity. The agency has published a graphic of the mud map about the discussion, which is interesting but insular.

What does this enquiry actually mean? The preamble to the document states:

‘The strategy will take a whole-of-state approach to enabling the creative and cultural industries to thrive and make a major contribution to Victoria’s future as a liveable, inclusive, prosperous and vibrant society.

Through this discussion paper, we are seeking your views on how Victoria’s creative and cultural industries can best be positioned to grow and contribute to our future and how to best foster the State’s creative ecology.

Critical to its success is ensuring that the strategy is broad and inclusive – of the diverse practitioners and companies that make up the creative and cultural industries, as well as the diverse audiences and markets they must connect with.

The lens through which we are considering the creative and cultural industries is wide – how do we best support the individuals and organisations within those industries and how do we ensure that their creativity ripples through the rest of the economy and across society?‘

Film Victoria has created a discussion board which posed a central question: What strategies can be implemented to grow and strengthen the Victorian screen industry over the longer term?

The government’s rhetoric around the enquiry contains that question, but it is not quite the overall point. This is about unlocking the value of our creative sector, which is not the same as making it bigger and more prosperous.

The ten themes are

You will notice that none of these refer directly to any art form, including the screen sector. They are designed to be holistic to encourage people to imagine linkages, to invent new possibilities, to track emerging forms. After all, in the digital age nothing is separate any more.

There is a section under the themes button which enables people to respond directly to each issue. The digital technology area is thin but intriguing.

There are obvious ways in which the screen sector hits many of those ten themes, which will be well recognised by the pundits listed above. We add value in economic terms, and we have the figures to prove it, as they have fuelled the political defence of the sector for nearly 50 years. Jobs yadda yadda, infrastructure yibbida yibbida, economic multiples yippee yippee.

But I would like to humbly suggest a version of these themes which might provide some food for thought for the sector.

How does our discussion of ourselves take in the crews and creatives from the visual arts, photography, design, music, sound etc etc who actually constitute most of our industry?

How do we fit into the larger creative and professional design community? Ditto music and live performance.

Are we happy with the educational facilities for the arts in Victoria?

What are the best strategies for supporting emerging creators?

Why do we talk the talk about diversity and cultural inclusion and gender imbalances and somehow turn out to be so white bread, and mostly male, and mostly middle aged?

Can we do anything about the role of AFTRS, nominally called the Australian Film Television and Radio School? Can we return training in sectors like screenwriting to TAFE?  Can we help ATOM? Can we do something about the approaching flensing of Open Channel courtesy of Screen Australia? What can we do to help these people at the Footscray City College?

I am a great believer in holistic thinking about creativity, because the real guts of anything is people who can express themselves in many different sectors and structures over a lifetime. Joy is never confined by categories. The Wheeler Centre is a good instance – based on the act of writing, it spills everywhere from zines to television. ACMI is surely going the same way.

I have gradually come to understand the role of audience development and the power of creativity in a community that understands what is being made. I think we are winning a slow-motion figh​t against brain-crushing conformity enabled by anti-intellectualism. We are coming to understand that the attempt to earn a living directly by making artistic work is maybe only half the problem, along with the issue of what form it takes. Aboriginal rock-painting was not made by people who expected a cheque.

These are just personal views. When the members of our sector approach these questions as citizens, as audiences, as parents of questing children, we might have some different answers. And some practical ideas, because we as a sector can never be faulted for our cunning.

I am making a plea for stepping outside our customary ways of thinking, driven by the need to find audiences, finance projects and run complex companies. Here are some f’rinstances:

We have an acute shortage in this state of producers who think in a grand tentpole way. Hollywood gets a huge amount of their blockbusting story-worlds from comics and young adult fiction. What would happen if we found ways of funding a graphic novels program? Publishing and marketing local YA novels? Funding a music theatre program to create musicals which can be mounted in schools?

A lot of our storytelling comes from history. How about we had a program which supported and published cutting edge social and political history? Found ways of renting historians to screen projects?

We keep talking about forcing developers to fund public art. What would happen if we decided that all Victorian government websites would be remade by local companies to current best practice, in association with tertiary researchers? The film industry in this state received a lot of support in the 80’s from the simple requirement that all government film and video work went through Film Victoria which contracted it out. Quality abounded, by the standards of the times.

Here is a tip. Neil Peplow is the new head of AFTRS. At the moment he is working at The Met Film School in London and Berlin. Please open the website. And ask yourself if there is a single institution, funder, production company, distributor or exhibitor who can publically display that range of diversity on its websites. Don’t check, you will just get depressed.

The point about this personal response is inspirational. You can respond to the discussion paper as a whole or make comments on the themes. A lot of the material on the site already is pretty specific, valuable as evidence of real needs and frustrations.

I have heard a fear around the traps from people who are more widely engaged in the arts, that the screen sector could be left behind if we don’t engage with the larger problems of our creative colleagues. We certainly don’t want to get stuck with defending old models, when the total value chain of the sector is so much wider than mainstream production. We all know that; we just have to remember how we were inspired to become involved, and how we had our first opportunities.