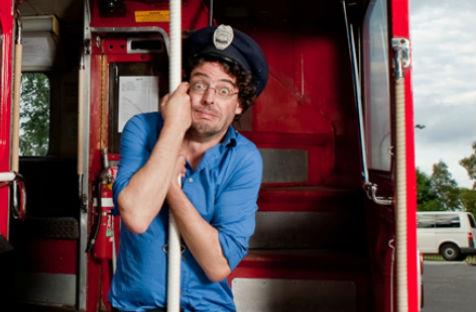 Between his two stints running the country, recycled PM Kevin Rudd was filmed for the political reality show Shitsville Express.

Deeply ironically, he wasn’t the first choice of producer and director of Shitsville Express Rick McPhee. He wanted the Prime Minister to appear in the sixth and final episode of the light-hearted show when aspiring young politicians have to pitch their solutions to an experienced politician.

‘I asked for the Prime Minister. She said yes, then she said no. I asked for Leader of the Opposition. He said yes, then he said no. (I shouldn’t really be saying that, should I?) We wanted someone who had been in the top job and had experienced some of the difficulties of implementing a visionary policy.’

So he and presenter Joe Hildebrand prevailed upon then former PM Kevin Rudd to take the gig. As it turns out, many viewers may tune in to the sixth episode just to see Prime Minister Rudd, who at the time of filming was just about to enter a new phase of leadership rumblings – ‘A complete coincidence, or a happy one, according to whatever evil geniuses at News Limited may or may not have come up with idea,’ said Hildebrand with a devilish laugh.

In fact when the show goes to air on Tuesday, five days after the PM’s resurrection, viewers will have the opportunity to switch between the real PM on ABC News earlier in the evening to the deposed Rudd in a comedic take at 9.30pm on ABC2.

The toilet may be the rightful place for much of Australia’s recent political commentary and debate – and the phrase ‘Up shit creek without a paddle’ may have described the plight of certain parties, so expectations may be low for the humorous political TV series. But Shitsville Express may actually move discussion into the realm of actual ideas, policies and visions for the future – albeit with sprinklings of silliness and stunts to leaven the mix.

The ‘Shitsville Express’ is a big red bus which transports four young aspiring politicans, selected from across the spectrum, and exposing them to some of Australia’s festering issues. With Hildebrand at the helm, the problems encountered include: the explosion of alcohol-fuelled violence, the gambling epidemic, substandard public transport systems, the housing crisis and coal seam gas mining. The young pollies are forced to meet those people directly affected by the problems, thus questioning their assumptions and proposing solutions.

‘For the most part, these were Uni kids and they were very much like I was at that age,’ said Hildebrand ‘They’re running around with hard-line values, they’ve got plenty of slogans, and they’re entirely convinced about what they believe in. They’re not really exposed to contrary and opposing points of view because they tend to hang out with people who are just like them. So when you show them the other side, they’re pretty shocked, I’m pleased to say!’

McPhee said as with his award-winning Go Back To Where You Came From the secret was in casting the right participants.

‘Oh God, the casting was such a big trawl. We contacted every student organisation, every political group, every young staffer for every parliamentarian, the Young Liberals, Get Up, you name it. I would have spoken to about 200 people and then had a shortlist of about 30. I have this folder and I know that when I look in there in 20 years’ time there will be at least three household names, one future Prime Minister and maybe a Pulitzer Prize Winner. It was incredibly gratifying to see how many engaged, informed and clever young people there are who know so much more at 21 than I did at 31! The intention was to get a broad range – roughly two from the Right and two from the Left. So we have a young Liberal, a young Labor, a Libertarian and a Green.’

For McPhee, the experience of making Go Back To Where You Came From taught him the importance of keeping the participants immersed in the destablilising experience. ‘It was important to try and keep them immersed, which was easier when it was a refugee camp in Kenya than on public transport in Sydney. But they had to dive head first into the issues we were exploring so that they could understand things they hadn’t before. Sometimes their opinions changed, and sometimes they didn’t, which is what I’d expect. But they always got a deeper understanding.’

Which brings us to the issue of humour in Australian politics – or the lack thereof. ‘We think we like our politicians to have a sense of humour,”’said Hildebrand. ‘We think that we’re larrikins and that we like to have a bit of a laugh and that we snub our noses at political correctness or at people being straightjacketed. Yet as soon as any politician tries to make a joke or lighten up or act a bit natural, they get absolutely crucified. Look at Craig Emerson with his ‘Whyalla Wipeout’ song which made him look like an absolute idiot – but I still supported it wholeheartedly. Or Mark Butler made a joke about someone stealing his car in western Sydney and of course he got pilloried by the media. And a lot of it’s from the Daily Telegraph, which I work for, because the government is so out of touch that it struggles to even make a joke properly, because an essential part of telling a joke is to know your audience! But we’re not a larrikin society at all. That’s one of the myths we have about ourselves. We’re an incredibly conservative society that reacts very violently to people who are unique, daring or unconventional.’

Despite the stunts and the jokes – and sometimes it’s hard to work out when Hildebrand is being serious – he’s clearly interested in seeing the bigger issues take central stage, the way they used to – at least in the past as he remembers it. ‘Rudd, Howard, Keating, Hawke – these were big picture visionary people who fought and died on big issues, ranging from superannuation to the Republic, to gun buyback, to intervening in East Timor, to apologising to the Stolen Generation, to bailing the country out of a recession so we didn’t get sucked into the GFC like the rest of the western world. Now, all of a sudden, it’s just pathetic schoolyard politics.’

Is he provocative? Not at all, says Hildebrand. ‘We’ve got this giant public discourse of boring people saying boring things so when I just try to cut through, people say, “Wow, that’s outrageous! But you can say that I’m incredibly provocative if that makes people want to watch the show.’

Shitsville Express begins on ABC2 on Tuesday, 2 July at 9.30pm.