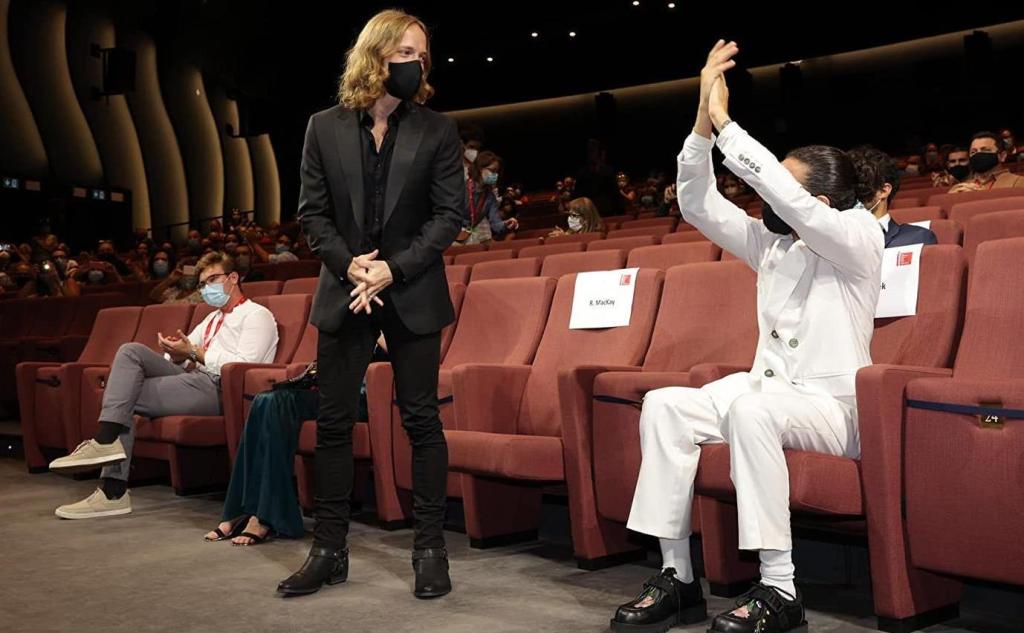 Critics could debate the merits and subtleties of The Furnace, High Ground (and Sweet Country in 2018) in their stories of the Australian frontier. At this stage, we are seeing Australian filmmakers bring a disciplined, unflinching eye to masculine violence and racist horror. International critics are impressed, but local audiences could follow the thread or ignore the pain. Either way, the films push deeply into the repressed monsters beneath our popular culture view of history.

Roderick MacKay’s film The Furnace was selected by Venice for the Orrizionte strand, prized as one of 19 ‘films that represent the latest aesthetic and expressive trends in international cinema’. It runs in parallel with the mainstream Golden Lion Awards, but it is also a competitive strand which specialises in small, culturally diverse films.

The jury president was Claire Denis, trying to reign in Oskar Alegria, Francesca Comencini, Katriel Schory and the redoubtable Christine Vachol, a guiding light of the American indy scene.

How do the critics respond?

The project scored a Variety interview with producer Timothy White, whose first producing credit comes from 1978, after which he had a vast, persistent impact on the Melbourne feature scene, along with his native New Zealand.

‘I felt that if we could execute it well, [we could] tell a story that was quite classical in nature…to the kind of folk that might not normally entertain notions of having an affinity, having empathy, with a character who’s [Muslim],’ he said. ‘I think the nature of the film really speaks to diversity and inclusiveness.’

‘As a mentor to many younger producers, White sees encouraging signs in a generation that “looks to the world as an audience” at a time when “you’ve got an ability to reach audiences in a way that’s simply phenomenal.”’

Indiewire finds much to respect:

‘Ultimately, The Furnace excels whenever it doubles down on the bond between Hanif and various Aboriginal men he encounters along the way: victims of persecution uncertain if they can trust anyone beyond themselves. When these characters look at each other, their faces take the story to profound places. MacKay’s delicate compositions are so engrossing that The Furnace might have smoothed its rough edges with less talk, but there’s enough depth to the central conflict to make The Furnace worthy of the cinematic traditions that inspired it. The plight of men like Hanif has been lost to the history books, and this sensitive portrait rescues it with a rich, emotionally resonant lead performance that complicates the history of the Muslim diaspora and Australia’s dark past at once. The reckoning continues.’

The Guardian urges audiences to see it on the big screen.

‘Is it obvious to point out that The Furnace is a B-movie? MacKay’s film is as tough as old leather and as unadorned as cow hide. There’s something of the 1960s spaghetti western to its tense standoffs around the campfire, even a nod to The Treasure of the Sierra Madre to its climactic showdown. But by this point Hanif is in for the ride – the temperature is climbing and it’s thoroughly enjoyable to see how this one will play out. We’re immersed in the action, living each twist and turn of the trail.’

The Hollywood Reporter says ‘The storytelling could have been more suspenseful’, and then ‘The taut structure to make this an outstanding example of the genre is lacking.’ But then falls for the cinematography and design, and the plain old genre edge.

‘While the simmering threat of violence could have been dialed up into more visceral climactic set-pieces, the film tells an engrossing story of a little-known chapter in colonial history, unfolding across the ruggedly beautiful desert landscapes of Western Australia.’

This kind of praise and respect works well for the creative principals, production companies and agencies. It is similar to the response to High Ground from Stephen Maxwell Johnson via Maxo Studios in association with Bunya Productions and Savage Films, with a script by Chris Anastassiades. It ran at Berlin this year, just before the pandemic. Indeed, it is almost like part two of a set which is finished by The Furnace.

At the time, Hollywood Reporter said

‘A revisionist Outback Western set in early 20th century Australia, High Ground draws on genre conventions but also transcends them with some unusually thoughtful elements, notably its meticulous and respectful depiction of Aboriginal culture. The result is a gripping, visually spectacular revenge thriller that makes superb use of stunning landscapes while also addressing the lingering scars of colonial-era racism.’

Variety has a slight reservation about pace, similar to the responses to The Furnace, but ultimately finds a sweet spot of approval.

There’s a hint of John Ford to High Ground, a sinewy, sun-baked faceoff between indigenous and invading armies in the Arnhem Land wilderness of Australia, though by now we probably need a better word than “western” for films that situate the tensions and tropes of Hollywood operas in their own distinct geographical context.

In the steps of Sweet Country

The first picture in this run of Indigenous frontier films is Sweet Country, released here in January 2018. The international reviews were even better, reflecting the fact that Warwick Thornton is a known master of the cinematic arts. It made $2.1m in the Australian market, and around $125,000 in the US.

Of course any picture released from now on is dropped into pandemonium. This is an odd situation, in which three films in succession go full genre on frontier history, playing with broadly similar tropes.

Babyteeth, another gem from this year, also respected critically, is on $306,000 here.

Justice is on a terrible wobble. Films that do well critically in overseas festivals, with objective reviewers comparing content around the world, can dribble out in our own market, or do enough to have an impact, all depending on external variables.

At least Babyteeth is being streamed in the US as a pay to view for which we have no official numbers.

But here is a real treat for the disheartened Australian screen supporter. Buoyancy, the film about slavery in an Asian fishing fleet, made by Rob Rathjen, is spoken about in the sector as a really fine film. It has an excellent producing crew in Kristina Ceyton, Samantha Jennings and Rita Walsh. It went to Berlin last year, ran in the Panorama strand and took the Ecumenical Jury Prize. It was the Best Youth Feature Film at the Asia Pacific Screen Awards, and the Best Indie Film at the AACTAs.

Read: Our interview with Rodd Rathjen

The affection for this film is not special pleading – the international critics had a lot of fine things to say about it, with hardly a reservation. In other words, it has formally done better so far than either The Furnace or High Ground, though they can ride the wave of social concern about Indigenous storytelling, and they have clear genre appeal.

Released here in June 2019, Buoyancy took a grand total of $52,889, leaving us to stomp around the room in frustration and despair. (Our critic loved it too.)

Four days ago, Manohla Dargis reviewed it for the New York Times, almost out of the blue, as a Critics Pick. It is a very fine review.

‘A guileless guide, Chakra is the story’s focus but isn’t one of cinema’s great explainers. Smartly, Rathjen doesn’t try to get inside his head but instead keeps you at his side throughout, making you a close witness to his physical labor, to the assaults on his body, his trauma and his self-preservation. Even the first sound in the movie — the steady flapping of his sandals — underscores his bodily exertions and the insistent rhythms of work. Before you know Chakra’s name, you already have a sense of the relentless exploitation that shapes the lives of everyone in this movie and that reaches from Thailand across the world to homes where pets eat fish caught by enslaved people.’

Other reviewers like Film Threat have picked it up too, also true to the spirit of the project.

‘What a fragile thing a young mind is, so easily shaped by circumstance. If subjected to continuous pain and suffering, a child will either perish or become a beast themself, consequently inflicting said suffering upon others. Rodd Rathjen’s searing drama Buoyancy offers a third scenario, wherein a young man’s inherent humanity seems to prevail, even after witnessing the depths of depravity. He may never be the same, yet among all the sunken dreams, hope continues to float.’

The reason for these American reviews now is touching. Kino-Marquee is currently streaming the film in North America; as part of this, audiences can specify which cinema they want to attach it to so it becomes a virtual screening for your local arthouse films. There are 28 on the list. It’s not the same, but it is a release. And these are prestigious cinemas.

The Nightingale, by the way, took $544,000 in Australia. Mystery Road made $411,000 in 2013, while its successor Goldstone took $915,564 and both films created a successful television life. Jennifer Kent’s Nightingale injects a particular energy into this group of films because it deals so explicitly in violent masculinity, is a frontier film stripped of genre tropes, in which a White woman is the central character interwoven closely with the genocide of Aboriginal Tasmanians. There is a lot to learn from this whole group of films.