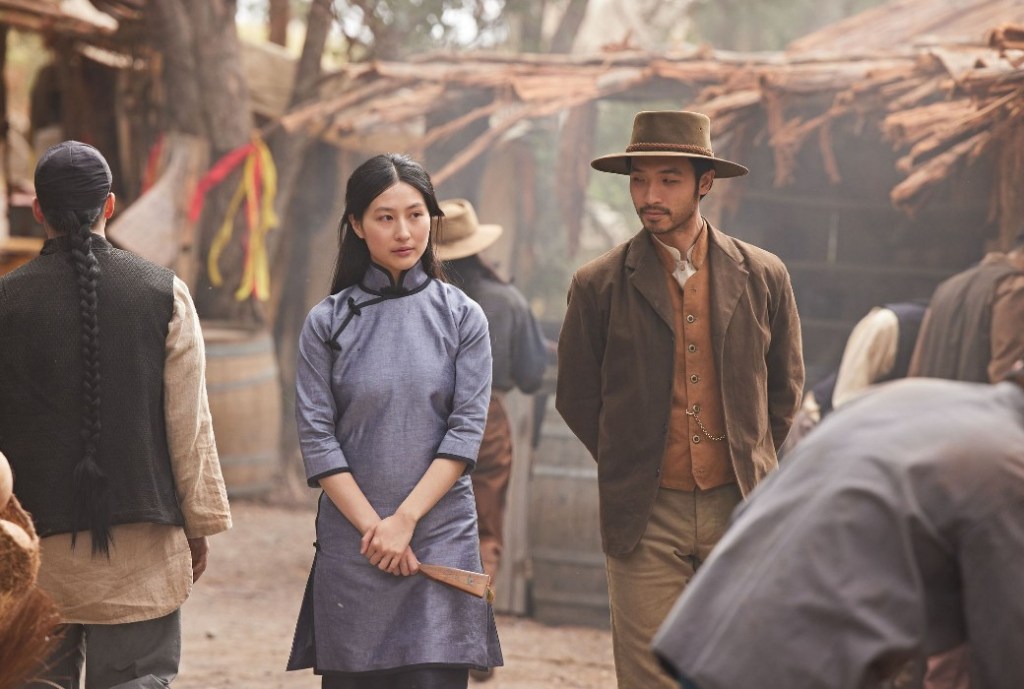 Recreating the streets of Bendigo in 1855.

The colonial goldfields in Australia were brutal places, even though they were so thoroughly policed that not a single ounce of metal was stolen from the escorts slogging down to Melbourne. So much of our collective history clustered in those hills as men dug with nothing to save themselves but a shovel, a wheelbarrow and tattered claims to pieces of land. SBS’ New Gold Mountain will retell this history, shining new light on the myths of colonial Australia.

Screen creators have tried for generations to tell the story of the Chinese immigrants on the goldfields as we remember the tales of mob violence and persecution, baked into government regulations. But the history never really fitted cliches, and there was so much about those journeys from Guandong Province that Anglo-Celtic Australia knew nothing about.

Read: Finding your tribe – an interview with Corrie Chen

That story has now been brought to our television screens at the hands of our multi-cultural broadcaster as more diverse creatives take their place on the public stage.

As the tagline says, ‘Fortune comes at a price’. New Gold Mountain launches its four parts at 9.30 on Wednesday 13 October 2021, folllowed by the same slot on Thursday, with the strategy repeated on the next week. According to the synopsis,

‘Using inspired-by-real-life characters and shining a light on forgotten events, this revisionist Western is based in the harsh wild west era of the Australian gold rush and unearths a captivating murder mystery.’

The New Gold Mountain cast is impressive. The Chinese lead Wei Shing is played by Chinese-born New Zealand actor and Karate expert Yoson An, whose international career covers Crouching Tiger, Hidden Dragon, Mortal Engines, Ghost Bride and the romantic male lead in Mulan. Most of the ensemble actors are working internationally with significant credits, brought together by the veteran casting expert Jane Norris.

He is opposed by Cheung Lei, described as ‘a formidable woman who has arrived with orders from China from her powerful father’. She is played by NIDA graduate Mabel Li, who is building a public career started on The Tailings, which received glowing reviews earlier this year.

The story is triggered by the murder of a white woman, investigated by Wei Shing, supported by newspaper proprietor Belle Sutherland played by Alyssa Sutherland, a Brisbane-born New York resident who recently appeared as Aslaug in Vikings.

This is a Goalpost Television production in the hands of Kylie du Fresne, supported by the government agencies strengthened by a distribution advance from international sales agent All3Media, with Corrie Chen as the single director of all four episodes. After seven years of shorts she began to direct television with two episodes of Sisters in 2017, followed by episodes of Five Bedrooms, Wentworth and SeaChange. One of her best moments is probably her television directing debut on Mustangs FC.

The show was created and lead-written by New Zealand screenwriter and playwright Peter Cox who first connected with the sector through the Gibson Group in 2005 via The Insiders Guide to Happiness which he also created, based on his MA thesis. The other writers are Pip Karmel, Benjamin Law, Yolanda Ranke and Greg Waters.

Matthew Temple surely had a wonderful romp through fuggy colonial interiors as the cinematographer, while Cappi Ireland would have wrestled to make worn-out shirts and smocks look dignified as the costume designer. Caitlin Yeo worked her magic on the music.

Read: Screen music ‘unlocks the soul of a film‘.

Marshall Heald, the SBS Director of Television and Online Content describes the production as ‘our first foray into period content [and] one of our most ambitious projects yet.’

An object of pride

‘New Gold Mountain is a uniquely SBS drama that speaks right to the heart of the SBS Charter. It explores themes of identity and belonging, class and race inequality and the nature and construction of truth.’

It is not surprising that SBS will work the show hard across its various platforms by encasing it in extra content. An extended half hour making of show will turn up on SBS Demand after the last episode on October 21.

SBS is also reviving the educational site Gold! which focuses on ‘First Nations, multilingual and multicultural experiences of the Australian goldrush era.’