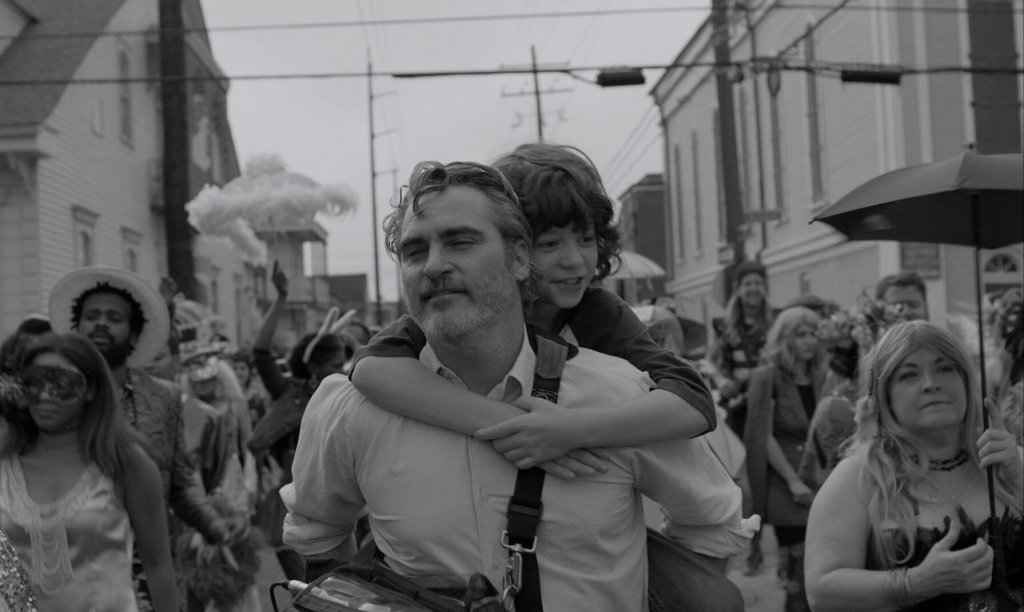 Mike Mills’ latest film is devoted to the joy of fatherhood. Image: Transmission.

Mike Mills is a filmmaker deeply interested in the intimate workings of family. Annette Bening’s turn as a single mum raising a teenager in a share house in ‘70s California in 20th Century Women (2016) was a love letter to his mother. Likewise, Christopher Plummer’s depiction of a terminally ill father coming out as gay to his son in Beginners (2010) echoed Mills’ personal story. His late father came out to him after the death of his mother.

And so we turn to his latest cinematic tribute, C’mon C’mon, which is devoted to the joy of fatherhood and his relationship with his own kid with fellow indie filmmaker Miranda July. And it is a loving work indeed. Much like the two works above, it isn’t a straight adaptation of Mill’s narrative. Instead, his analogue here is an uncle – Johnny, played by Joker star Joaquin Phoenix – who is estranged from his sister Viv, depicted by Transparent lead Gaby Hoffmann. And it is down to gifted child actor Woody Norman to breathe life into Jesse, the young soul at the heart of this movie that’s shot in black and white by American Honey and The Favourite cinematographer Robbie Ryan.

Separated by physical distance – Viv and Jesse live in sunburnt Los Angeles, while radio journalist Johnny is based in New York – the siblings have also fallen out of touch since the death of their mother a year previously, following the explosive pressure that erupted between them then. But they are thrust back into each other’s lives when Viv’s husband Paul, a much smaller role for Halt and Catch Fire’s Scoot McNairy, experiences a traumatic recurrence of his mental health challenges. With Viv stuck in a hard place with little time to arrange a possibly long-term carer, Johnny is compelled to offer his services and take his young nephew under his wing.

Little does he realise just how eye-opening the task of conducting 24/7 parenthood to a precocious nine-year-old will prove to be. This relationship is underlined by the fact that Johnny is currently working on a documentary podcast series, interviewing young folks about their hopes and fears for a world that can feel increasingly scary to even us grown-ups.

These discussions, oft-repeated with elliptical audio echoes, lend the film a genre-crossing, chameleonic nature. But the playful form of these sidesteps had the unexpected side effect of pulling me out of the narrative somewhat, rather than bolstering it. They are, unfortunately, a little on the nose and too earnest by half. But if the film loses a little of its pull when compared to Mill’s more subtly drawn films, by dint of this more affected approach right down to the artful choice of its monochromatic palette, then it’s not a total loss.

Phoenix’ rumpled charm as a man out of his depth but open to learning more from his young ward is a testament to his ever-engaging performances. Most of us, parents or not, can recognise his vacillating responses to the whirlwind emotions of a young and restless mind, swinging hard from adoration and inspiration to fury and flummoxed fear in a heartbeat. Anyone who has ever been placed in charge of kids for even a few minutes will likely know the innate terror of turning around to find them not where you thought they were in a supermarket, street or park.

As tender as this portrait of emerging unclehood is, replete with shared beds when Jesse misses his mother and passing on his recording skills to the curious youngster, the most affecting relationship in the film is actually that between the siblings. Though they are forced physically apart again by circumstance, as Johnny opts to return to New York with Jesse and then on to New Orleans with work, Viv is nonetheless a constant presence in the film. She’s there to dole out advice to Johnny when Jesse cracks it, and also nimbly feels around the schism between her and her brother with evident vulnerability.

Hoffmann is a likeable performer with great presence, helping bolster these late-night calls that punctuate C’mon C’mon, but again, Mills’ usually less overt writing feels a little too pointed here. Particularly when it makes broad strokes statements about gender inequity that are certainly worthy but come across a little corny and a tad contrived. Funnily enough, for all their awkward insertion, it is the non-actor children sharing their experiences that best ground the occasionally too floaty film in the real. Minor grumbles aside, C’mon C’mon is a big-hearted experience that is generous with its not overlong stay. And that is worth celebrating, even if the fictional documentary suggested winds up feeling like the more intriguing approach.

It’s a real shame that actor-turned-writer/director Rebecca Hall’s debut feature behind the camera didn’t rate any Oscar noms. The sumptuously shot black and white, Netflix-housed adaptation of Nella Larsen’s novel shimmers on the shoulders of also overlooked Ruth Negga and Tessa Thompson, delivering career-best performances as high school friends reunited who are negotiating the fraught racial boundaries that seek to rein them in.

A visual masterpiece, thanks to Lukasz Zal’s crystal clear cinematography, that paints the raging political struggles of East v West and the central love affair straddling that gaping divide in sublime chiaroscuro shades. Joanna Kulig and Tomasz Kot smoulder with incendiary desire as the club singer and a pianist who is the pride of Poland, who find themselves thrust together than torn asunder in an agonising dance across the Iron Curtain.

And for something wildly different, writer/director Robert Eggers’ bonkers follow-up to his Satanic panic horror movie The VVitch is a far less restrained film, and all the more furiously fun for it. What’s not to love about salty sailors Robert Pattinson and Willem Dafoe left to their own homoerotic devices on a remote island plagued by shipwrecks, the siren call of mysterious maidens, particularly vicious seagulls and a possibly demonic cephalopod? You have been warn ed: My Octopus Teacher this is not.