Bringing Undertow to the cinemas is a ten year labour of love and patience. Producer Lyn Norfor takes us from development to the last financial obstacle.
David Tiley 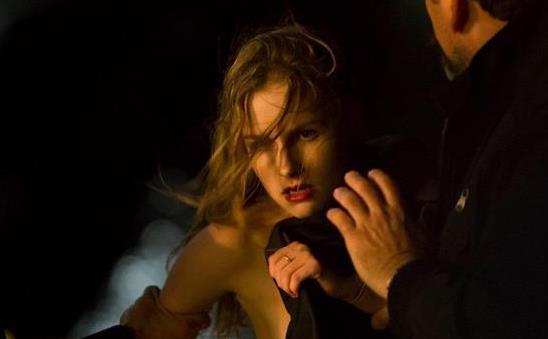 We are launching an occasional series which looks at indy productions of fine films in detail. Undertow remained true to itself through long development and challenging financial obstacles to a release in early 2020. Emerald Production links three very different women into an excellent team which learnt a lot from the experience. Here we cover the story from inception to completion of the film.

In 2009,  Lyn Norfor, Prue Williams and Sheila Jayadev came together at the Centre for Screen Business in the Australian Film Television and Radio School. It was a rigorous training environment which emphasised the need for working together and the value of new business models.

They formed Emerald Productions, and launched into a series of short films to create attention and set up long term relationships. They soon connected with writer-director Miranda Nation and her project, Undertow.

This article is the story of this production, told by Lyn Norfor who is pragmatic and straightforward, and sometimes works with Screenhub as a writer. There’s a lot to learn from their long campaign.

They were an obvious fit together. Norfor had produced a film under the 10ba tax provisions, worked on crews, became a writer and journalist and came back to film after childrearing. Sheila Jayadev was an entertainment lawyer who kept making short films. Prue Williams trained in the theatre but ended up as a property developer before reigniting her artistic fire.

‘We started attracting a lot of emerging female writers and directors,’ says Norfor. ‘We were women so we didn’t really notice until someone else commented to us about it.’  Undertow is a challenging film, about men’s betrayal of women, the hunger for motherhood, a still-born child and a pregnant teenager in a footy mad town. It was never a multiplex picture.’

Prue Williams is not a fan of fully funded government production, according to Norfor, who says. ‘The whole idea of having a completely subsidized industry was quite foreign. So she was always, in a good way, really questioning us. And so we made a decision early on that even with shorts we always had private investment.’

The three kept making shorts and developing films with scraps of government money while they pursued independent careers. Norfor produced commercials and taught, Williams was a businesswoman and Jayadev became the business affairs manager for Matchbox. She ultimately produced Ali’s Wedding, a light-hearted multicultural rom-com aimed at the mainstream.

Eventually Norfor, Nation and Undertow were accepted into Screen Australia’s Springboard program, which helped producing teams to develop a feature, and funded a short for two groups as a sampler for the feature.

With Bonnie Elliott as cinematographer they made Perception around 2012, and it made the prestigious Çlermont-Ferrand Short Film Festival in 2014.

Times were easier in those days, which now seem so far away. Screen Australia could afford intensive development programs. Other Springboard participants from that era did well. Among them Zak Hillditch went on to make feature film These Final Hours, Grant Scicluna made Downriver, and Nick Verso created Boys in the Trees.

The logic, from Norfor’s point of view, was to attract local and international distributors and sales agents, which allowed Screen Australia to invest in the production and triggered the tax offset.

The whole process [of making Perception] took around two years. ‘It was quite a big short, and we had to take six or nine months off from the feature development process to produce and finish the short. We had Paul Welsh, who was a Scottish filmmaker, as the creative lead on Springboard. We worked consistently with him so we did have a single voice, giving us notes and feedback.

‘We did get some additional script funding from Screen Australia. There was probably a period of 18 months where we had lots of different feedback and lots of voices and I think we probably lost our way a bit.

‘It’s one of those processes, maybe it is necessary in processing a script where you go back, not to where you started from, but it does feel circuitous.’

They wanted it to feel very contemporary, but the awareness of sexual politics in the sector was starting to evolve so the ground was shifting under their feet.

‘This was well before #Me Too and the awareness of industry abuses and the lack of women directors, and the numbers hadn’t been crunched. All of that was starting to come out and we had one of those early projects with a female team, the subject was female and we were dealing with issues that hadn’t really been dealt with on screen. So we were finding our way, as were the script editors and the agencies.’

Meanwhile, of course, they were still campaigning for their marketplace attachment with a difficult film which traditional executives found pretty difficult to empathise with.

Liz Watts (from Porchlight) came on as executive producer and introduced them to Charlotte Mickie from Canadian sales agent Mongrel Media, who first met them at the Berlin Film Festival. Then they secured John Molloy from Australian distributor Mindblowing Films which has a long history importing Indian films.

Now they could apply for production funding from Screen Australia, and put in for a provisional certificate for the tax offset.

Meanwhile, Emerald was raising money. Prue Williams was involving private investors, some of whom came on from the short films. Lyn Norfor was writing budget after budget, confronting the problem of location, and a film that cried out for an expansive sense of place.

Miranda Nation grew up in Geelong and the Victorian south-west coast, and the film was set in those locations and the particular culture of a small industrial town. But the film has a lot of locations and complex scenes, and Geelong is 80km from Melbourne, so shooting in the real town would be more expensive.

The budget which settled at $2.5m was very tight. Miranda Nation and Lyn Norfor went back and forth to Geelong for the final eighteen months of development, developing relationships with the Chamber of Commerce and local people, and taking heart from their enthusiasm. The council committed to storage space and a free office with power and wi-fi, and dealt with parking. They could get local extras and some crew while their post companies were willing to become investors.

What is more, Film Victoria was very enthusiastic and the state government was prepared to put in regional money. Emerald could cover the extra costs of a location shoot.

But Screen Australia declined to support Undertow at the last moment. It was facing a diminishing budget, more demand and a general push towards television. With low budget features unlikely to get much return, the agency was trying to reduce the spend in that part of their market. Without Screen Australia the budget was now under $2m.

They did not have the money to finish the picture and they were desperate to shoot. It was a winter film and they could not afford to wait another twelve months.

In a gesture of consummate irony, Miranda Nation had a baby in the middle of this. Now they were going on location recces with a capsule strapped in the back of the car.

Fortunately, the discussion with Screen Australia played out over two rounds which delayed the whole project by four months, while Miranda’s child grew and became more independent.

Finally, says Norfor, ‘you just have to make that leap. We were going to shoot it even though to shoot regionally is more expensive. At that stage we were just determined that we were going to make it. We cut the budget to fit the available funds, which meant that post production was extremely tight’.

The pre-production period was adequate, helped along by a location manager who was a recent VCA graduate who lived in Geelong, while they were able to hire locally for the production office.

The shoot was cut from six weeks to five, padded out by a few days of second unit with a small crew. As Norfor emphasises, it is difficult to reduce the budget by cutting crew because it is already so small.

While all this was going on, they were casting the film. It was extremely difficult and took over a year. They had two female leads, one a young girl and the other a woman in her thirties, while sales agent Mongrel wanted the picture to be not-television while most Australian leads were known here but not overseas and came from serials. Emerald had a couple of international names at various times but they all pulled out.

From Norfor’s point of view, it seems that they were casting at the absolute worst time. Since then, the rise of streaming has erased much of the distinction between film and television, and allowed a new generation of Australian women to get an international profile. Even better, we now have great scripts written for powerful women and the female audience is factored into marketing.

Once the film was shot, the completion problem was even more intense because they knew they had the film they wanted. As Norfor remembers, ‘And then we got a rough cut together and we went to Screen Australia. And they agreed to give us post funding and completion funding, which is a lifesaver.’ It amounted to a crucial $150,000.

And they had a film.

However, the sales agent Mongrel had decided to focus on domestic Canadian films and withdrew from its international slate. The dynamic Charlotte was gone from the project, and Emerald had to go back to the drawing board for international business.

But that is another story, which we will tell in Part Two.