Van Vuuren and Vuko webseries Over and Out has won at Cannes. We caught them as they waited for the result.
David Tiley
[This is archived content and may not display in the originally intended format.] 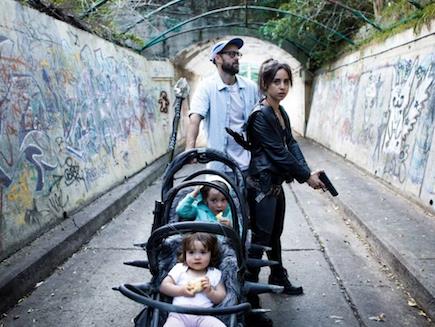 Image: there’s a reason for those battle prams. From the Variety coverage.

There is a moment when a project is first run for an audience on the international festival circuit which is unique. The makers watch the audience, barely able to breathe, hoping it works. If it is in competition, they float suspended until the results are announced.

Screenhub caught Christiaan Van Vuuren at Cannes in exactly that state. Six hours later he and his creative and life partner Adele Vuko knew they had won. It will take them a while before their feet touch the ground.

They have made a web series called Over and Out which was accepted into the Short Form Competition at the CANNESERIES festival to face fierce opposition from nine other teams. It has just finished screening to an audience and I have already been told that it went just fine, with audiences bopping and laughing and full of a mix of humour and wistfulness.

I rang Van Vuuren. ‘We are wildly excited,’ he said. ‘People were laughing in all the right places and hanging onto the emotions as well. It is great to see it on the big screen because it’s always been on computers and phones so far.’

Can they win? They don’t know. ‘The calibre of the series is just incredible. At least four or five of them had us on the edge of our seats. If they turned up on Netflix we would binge watch them, to be honest.’

Robbie Hood, the Indigenous series about crusading kinds in Central Australia, is also in competition. It was created, written and directed by cinematographer and documentary maker Dylan River.

How did this strange voyage round their emotions start for the Over and Out team?

Once upon a time Christiaan Van Vuuren was trapped for months in a hospital isolation ward, and took to youtubing his solitary rap acts as The Fully Sick Rapper.

The world was enthralled and he went on to Bondi Hipsters and Soul Mates also for the net, and history slowly revealed that he and his gang were internet pioneers. Van Vuuren built a career as director, while Adele Vuko is a writer, director, producer and performer, most publically as one third of the comedy group around Skit Box.

This episode had 1.6m visitors which was a lot eight years ago.

On that first series he met Adele Vuko, also a comedian, and they became life partners and helped each out on projects.

Swapping boss roles is fun but they wanted to work much more closely together. They developed a show they couldn’t make, and somehow ended up with two small children. As Van Vuuren explained, ‘We kept talking about the wildness of having children and tried to change it into something funny and silly and came up with the idea of parenting in the apocalypse and the rest of the story spooled out from that.’

It is a stunningly simple idea: normal family plus kids plus apocalypse plus zombies. ‘It was originally going to be a half hour series,’ he said, ‘but Screen Australia and Youtube wanted to fund it through the Skip Ahead program. We decided to use short form as a way to fully put a stake in the ground. We could find and develop the characters and learn about the world ourselves.

‘It is plugged full of our own experiences and arguments and the changes we had as human beings when you have kids. There’s the ones you expect and then the ones you don’t. Watching the news on television every night becomes a kind of existential nightmare that you bring kids into. Nobody tells you about that.’

Says Van Vuuren, ‘Often when we fight we are seeking validation and to tell someone how much you love them and how hard you are working and we are feeling that sort of thing into the show. We wanted to make a series that that uses the apocalypse as a metaphor about how hard it is to raise children and keep the relationship working through the process.’

‘They are really fun and lovely to create. They force you to be really imaginative and build the world with very limited resources. From a storytelling perspective it is a real challenge to tell a story in five minutes. The more we do the better we get because we are really challenged for real estate and everything has to be worthwhile. There is nothing there that doesn’t deserve to be on the page.

‘Whatever else happens we will always want to do short ideas. The internet is a real, raw, creative democracy. It takes a good idea to get funding and there is something really satisfying when something goes out all over the world in a few days.’

There is a fabulous mixture of fantasy and experience here, of dreams and the reality of parenthood. ‘They are such lovely little eggs and it’s been gnarly and lifechanging and hard at times. This project is like relationship therapy. Sometimes focusing on something together and creating something is really beautiful.

‘But now we have kids it is really awesome to get paid and deal with the rent.’

Van Vuuren has a lovely Instagram page. At the moment it has a photograph of the two of them grinning like idiots with the trophy.

The series goes up on Youtube on June 17 and they are still campaigning to make a half hour series version. At the moment it is 5 by 5.

The full crew for Over and Out is

The cinematographer is unknown but brilliant but was sadly eaten by zombies on the last day of production.