How to conduct a respectful audition

Four very different experienced creators describe their way of working in the audition process.
David Tiley
[This is archived content and may not display in the originally intended format.] 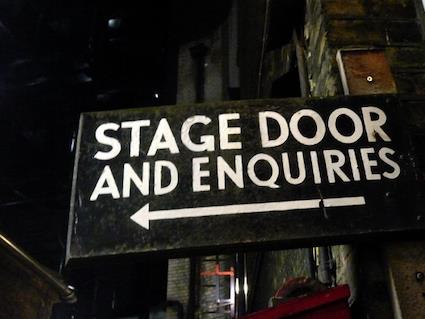 The distance from grunge to glory can be a single audition. Image via Flickr by Corey Doctorow of Garrick Theatre, London.

Actors and agents have legendary war stories about cruelty and contempt in auditions. Emerging directors and producers can make lives miserable while they learn the ethics and behavioural standards of the craft. We asked four experts to tell us how they make the process humane and constructive.

Lauren Mass is a casting director with Chameleon Casting, who came into the profession as an actor with a feeling for the psychology of the process.

‘People don’t actually know what a casting agent does,’ she said. ‘Really, a client or a company or producer comes to us with the concept of a project like a commercial, or a series or a live event and we are given a brief about what they are looking for – the people, the style, the energy, all that kind of thing.

‘We go out to our different channels like agents or freelance artists, or community groups for the more real people and we get the best people in for the audition. Then we conduct the audition and facilitate the casting and give the best variety of talent to the client and liaise from there.

‘Personally speaking everyone here at Chameleon is about ensuring that the talent or the artist or the performers are really comfortable and are allowed to perform their best. If the casting agent is rushed or preoccupied, the talent is tense and on edge. We want a relaxed and supportive environment. We want them to do really well, we have brought them in thinking they can do it. It is that give and take. We show we believe in them and that ease is really important in the casting room.

‘The process varies for every role. If we are dealing with actors they might get a script and a few lines of dialogue or at least a sense of why they are coming in so they can prepare a little bit. The audition might be a simple improvisation in the studio. We throw different things at you and have a bit of fun. Every project is really different.

‘I think it is important to see lots of people. We try to have general auditions a few times a year to meet new graduates out of drama school or people with new backgrounds who want to have a go. We are trying to keep it fresh and make sure we find the emerging talent.’

Nancy Black is a theatre maker and artistic director of Black Hole Theatre, and directs opera and works internationally on challenging productions. She believes that the best work comes from courtesy and civility from which trust develops.

‘I don’t think a respectful audition is any different from any situation where you are having a conversation with someone you don’t know,’ she said. ‘It is mostly women who are being treated atrociously and it should stop, that kind of behaviour.’

‘In La La Land there is a series of audition scenes early in the film which are very funny, where nobody pays her any attention,’ Black said. ‘She is cannon fodder until she gets her big chance and she doesn’t have to audition at all.’

‘In the first instance, actors are auditioning for agents, who they need to respect. The agent collects numerous audition pieces and sends them to whoever is auditioning for film and TV. The process is not a factory or a conveyor belt even it often feels like that both to the actors and the agents.

‘I come from a whole tradition where you just had to be strong and resolute and do good work.

‘You are very vulnerable as a person, as an actor going into an audition. You do have to be tough but you are vulnerable and that is never recognised by the people on the other side of the camera or the desk because they themselves are never vulnerable. They have all the power – it is a complete imbalance and it can’t be changed. You gain power further down the track if you succeed and a lot of power if you are an A-list actor.

‘When the director gets in, the list has been pared down to the final ten. Then it is down to who the director is: is that director a misogynist? Respectful of human beings? Egotistical and driven by their precious vision? Are they collaborative or maniacal? An actor would do well before they get to that position to find out who is going to be auditioning them and what they are like. So they are not taken by surprise if they are treated badly.’

The film and TV director

Matthew Saville is a prominent television and film director with a strong feeling for script, comedy and performance. He is known for Cloudstreet, The Slap, Please Like Me, Seven Types of Ambiguity and The King. He has made two independent features based on character, Noise and A Month of Sundays.

‘I think for me the first thing you have to acknowledge is it’s a dental appointment, a horrid exercise for everyone involved. I don’t enjoy auditioning at all because I find myself empathising with the other person in the room. You have to be very mindful that the vast majority of actors have already done quite a bit of work and they’ve done it pro bono. Before that first audition they learnt their lines and did all the prep and came to the audition on their own time.

‘The other thing I try to do and sometimes fail to do is give them respect and the space, to let them have the room and show you what their interpretation is before you come in with your directorial notes. You owe it to them to give them the opportunity to show what they bring to it.

‘Hopefully you find something within their wheelhouse which is far more interesting than anything you thought of. It’s a rare moment. All good casting agents will make a list and throw in a couple of curveballs and when they work well it is really exciting.

‘The other thing is to be mindful of is you are going to run into people again down the track and they might ask why they didn’t get a part. It is impossible for them to have a clear perspective and they might do a really great audition but it doesn’t fit with the cast or your own interpretation.

‘The whole premise of the process is predicated on judgement. Even if you minimise it they are being scrutinised and it must be an incredibly difficult situation.

‘It is a very delicate process and you have the same problems on set. It’s very important to sympathise or empathise with the actors who are exposing themselves. They are fragile in a space. If you are on a project you form very deep and hopefully trusting relationships. You are right inside each other’s head. Then, after the wrap party, it’s just, “See you later”. We are sort of serial monogamists.’

Steve Westh tends to specialise in documentaries which combine excellent and surprising interviews with reconstructions or performed scenes like Bom Bali, The Great Escape: The Reckoning and Desert War. Most recently he made the exquisitely patient and tender series Don’t Stop the Music in which he was embedded with a school music class for around a year. Many of his performers are non-actors who bring the authenticity of people outside the screen sector.

‘I’ve always chosen to work with casting agents. They give me a respectful hearing and if I am very clear about what I want, nine times out of ten they don’t send you idiots.

‘It is a process I really enjoy because I love talking to actors. I’ve got respect for them straight away. If they listen to me they can bring things in I haven’t thought of. The more questions they ask the better – I don’t like to be a tyrant. If it’s not fun I don’t want to do it.

‘I guess what I am looking for is someone who can take direction, who will listen to what I say and make a serious attempt at delivering what I ask. Some are hopeless and have an inflated sense of their own abilities.

‘Other times I get kids who are fresh out of film school and so hungry to do anything they forget to be authentic. They figure they have to be an actor but for a documentary I am looking for someone who will resonate with the character they are playing. I’ve already done a lot of research, and sometimes I know the real people, so they are creating someone I already know a heap about.

‘At the same time, it is a mistake to cast people who look exactly like the real people and have no acting ability. If they are speaking I can tell in ten seconds if they have what it takes.

‘They have been sent a script and should have actually read it, although sometimes I will send it to a casting agent who hasn’t passed it on because it is too much paperwork. The person turns up completely green, knowing nothing except they are supposed to be a soldier in World War One.

‘The really good ones have read the script and then Googled the character online, so they have arrived after really doing their homework. I can say, “You’re the actor, I didn’t go to acting school. I’m giving you loose parameters and I want you to bring something of you to this, to take ownership of the role”‘.

‘I give them license to strut their stuff. I just want people to be invested so they can inhabit the character. Faster, slower, louder, softer – that is all they get from me. I really hate lazy actors, but I have had a lot to do with them.

‘In Desert War, I had one actor I cast as a soldier in the desert. He couldn’t get the voice right and he is a really slapdash person who was speaking in a vernacular which is too modern. I asked him to swear between every word he said. He did that, I told him he was great and then made him take the swearing out. And he got it.

‘There is a scene in Fiery Hawk about casting a commercial. It is irreverent and outrageous and quite filthy. It gives you a really good idea of the way some directors carry on.’